Accessibility links
Anti-Islamic Rhetoric On The Rise: Is Free Speech Taking Aim At Religious Freedom? It's happening not just in New York, but all around the country. Protests targeting mosques and Islamic gathering places, similar to those against the proposed Muslim community center near ground zero, are on the rise. 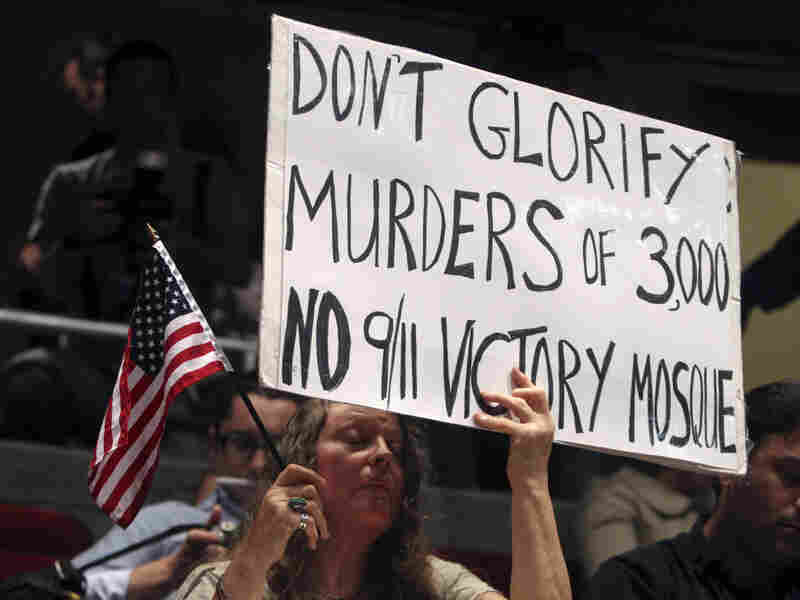 It's happening not just in New York, but all around the country. Protests targeting mosques and Islamic gathering places, similar to those against the proposed Muslim community center near ground zero, are on the rise.

Anti-Islamic rhetoric appears to be increasing on blogs, talk radio and in political campaigns, too.

Local opposition to new mosques is nothing new, but usually -- at least publicly, anyway -- the critics complain about increased traffic, noise and more traditional zoning concerns.

But in Temecula, Calif., protesters against a proposed mosque there weren't shy at all about saying exactly why they don't want this proposed mosque.

Though supporters of the mosque outnumbered opponents in Temecula that day 3 to 1, such anti-Islamic sentiment appears to be growing stronger, in California and all across the U.S.

There have been similar protests against mosques in Murfreesboro, Tenn., Sheboygan, Wis., and elsewhere. It's not just mosques being targeted, but increasingly, the Muslim faith itself.

A church in Gainesville, Fla., is even planning a "burn the Quran" day on Sept. 11.

Voters in Oklahoma this fall are being asked in a referendum to ban the use of Sharia, or Islamic, law in the state's courts, even though there has never been one instance of Sharia law being cited or used in the U.S., nor any request for Sharia law to be used in any court in the U.S.

And last month in Tennessee, while campaigning for the Republican nomination for governor in his state, Lt. Gov. Ron Ramsey suggested Islam is a cult and may not be protected by the First Amendment.

"The question becomes," Scott said, "when are young people indoctrinated into the Muslim ideal and how much are they willing to carry out? I mean, it's no different than the Japanese kamikazes."

"I cannot think of a time in which anti-Islamic sentiment has been higher than it is today," Muslim scholar and author Reza Aslan says. He says the anti-Muslim fervor in the U.S. is even greater now than it was after Sept. 11, 2001.

"What is shocking is that you have mainstream politicians, people like Newt Gingrich, who are openly espousing these views of religious bigotry as a political platform."

He says part of it is due to fears raised by the recent uptick in attempted terrorist attacks by Muslim extremists of American descent or citizenship, such as the failed New York City car bombing. He agrees with others who also point to anxiety over the poor economy as another factor.

"But I think the truth of the matter," Aslan says, "is that there has been certain television networks, news networks and certain politicians -- Republican and Democrat -- who have really latched on to this paranoia, this fear, of Muslims in the United States and have done so for economic and political gain."

She says the anti-Islamic rhetoric is appalling and usually inaccurate. Historically, she says, such rhetoric has often led to horrific violence, including the Holocaust in Nazi Germany.

"To see the rhetoric that enabled people who had good sense to give over to it beginning again scares me to death," she adds.

Human rights lawyer Arsalan Iftikhar, founder of TheMuslimGuy.com and a fellow at the Institute for Social Policy and Understanding, agrees. "We're seeing it reach a visceral, political level that we really haven't seen since 9/11."

"Of great concern to the 7 million American Muslims who live in the United States today is that we're starting to see such vitriolic hatred against our way or life -- against who we are -- by people that we used to consider neighbors," Iftikhar says.

He fears the country is turning into what he calls the "United States of Islamophobia."

Truly A Land Of Religious Freedom?

Iftikhar and others say the anti-Muslim rhetoric threatens one of this country's fundamental rights: freedom of religion.

But Muslim Americans say they are also encouraged by the support they are getting from millions of Americans from other religious faiths.

Various leaders of Christian churches and organizations, Jewish organizations and other faiths have denounced the rise of anti-Muslim rhetoric and have pledged their support to the proposed Muslim community center in Manhattan.

The Rev. Michael Kinnamon of the National Council of Churches of Christ is calling on the estimated 50 million congregants in the council's dozens of Christian denominations to make their voices heard above those angry voices that, he says, "really represent only one corner of the Christian world."

He's hoping Christians speak up in favor of the New York mosque and in support of mosques in their own communities, he says, adding that some Americans seem to be forgetting that this country was founded by those escaping religious persecution in Europe.

To those who say that a church would never be allowed near the holy shrines in Mecca, Kinnamon says, "of course not." But, he says, "That's the point. The United States is not Saudi Arabia. We stand for something different. We stand for a kind of openness of religion that I think is worth preserving and is part of who we are."