Accessibility links
Bedbugs Aren't Just Back, They're Spreading Once a problem of the past, bedbugs are moving out of the big city. At first they appeared in dense city centers such as New York and San Francisco, but reports of infestations are now showing up in places like Ohio and Texas. 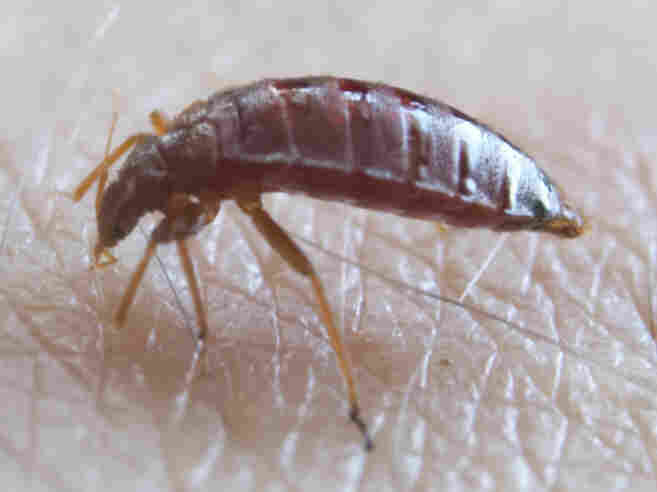 At first, they appeared in places that you might expect: dense city centers such as New York, where officials may seek a bed bug czar, and San Francisco, which is trying landlord-education programs to keep the pests away.

But now, there are reports of bedbug infestations in homes and hotels from Ohio to Texas.

The stories are downright creepy. Exterminator James Self, who owns Ameritex Pest Control in Beaumont, Texas, says he was called out to one bedbug-riddled site that was like a scene from a horror movie.

"There were spots all over the walls, and I didn't know what that was," Self recalls. "I thought maybe it was some wallpaper decoration or something. But as I approached it, it was totally covered in bedbugs -- more than I've ever seen. And that's the one where we had to rip up the carpet, throw away all the furniture. It was terrible."

'You Should Be Worried'

This business of feeding on other people... I think we all know some people like that do that, don’t we now? ...Maybe bedbugs aren’t so awfully different than somebody we know.

Infestations like that are popping up across the country at an alarming frequency.

"You should be worried -- very, very, very worried," says Michael Raupp, an entomologist at the University of Maryland who spoke with NPR's Audie Cornish about the bedbug resurgence. Raupp runs a website called "Bug of the Week," and this week's star is -- you guessed it -- the bedbug.

"They're really not just for bedrooms anymore," he warns. "They really have become widespread almost in any kind of establishment where people live and sleep, throughout both small and large cities."

Raupp says bedbugs go where the food is. And for these critters, the "food" is sleeping human beings.

There was a time in American history when bedbugs were just accepted as a part of life, he notes.

It seems they could achieve that same ubiquity in the U.S. once again.

"We're now in the era where people travel everywhere," Raupp says. "They just don't go to major cities like London or Paris. We have people going to second world countries and third world countries where, frankly, bedbugs are commonplace. And these guys are real troopers -- they're hitchhikers and stowaways."

"Whenever we travel, there's always a possibility that we can bring bedbugs home with us," Raupp says. "And bedbugs don't discriminate. This is not a matter of poor sanitation or poor housekeeping or uncleanliness."

So how do people know if they've got a bedbug infestation? Raupp says your skin can tell you.

"These are gonna be small, itchy red welts -- unusual bites," he adds, noting that people should call in professionals if they see these warning signs. "This is not one that you're going to want to tackle yourself," Raupp says.

In spite of the distress bedbugs bring, Raupp says he's still a fan.

"I find all bugs mysterious, wonderful. These ones I tend to find a little bit despicable. But they're fascinating in their own regard.

"This business of feeding on other people -- the ectoparasitic life -- I think we all know some people that do that, don't we now? And maybe bedbugs aren't so awfully different than somebody we know," he says. "So, there's a little bit of us in them, perhaps."