Accessibility links
Antoine Dodson: Riding YouTube Out Of The 'Hood' Antoine Dodson of Huntsville, Ala., found overnight stardom after he appeared on a local news report to talk about the alleged attempted assault of his sister. The video of his remarks has scored millions of hits on YouTube, and so has a song that's based on his story. Dodson reflects on the attempted assault, and his own efforts to capitalize on his fame. 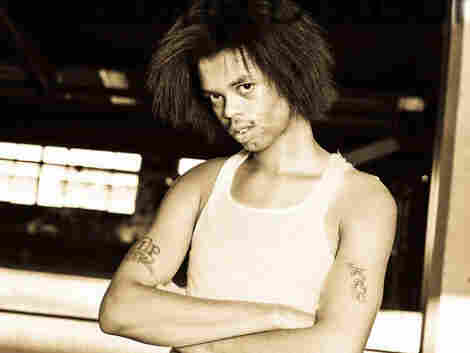 YouTube phenom Antoine Dodson says he likes the "fast life" and plans to use his fame to, among other things, make his mark in the fashion world. Downtown Studios hide caption

Antoine Dodson says he is not bothered that millions of people have watched -- and laughed at -- his appearance in a Huntsville, Ala., local news broadcast, which has become a YouTube sensation.

It all started in July, when an intruder allegedly crawled into his sister's bedroom window in the wee hours of the morning and tried to sexually assault her. Dodson and his sister successfully kicked the man out.

Later that morning, something happened that changed his life.

The local news showed up.

What followed was an afternoon news spot on local NBC affiliate WAFF-TV, in which Dodson delivered a now famous warning to his sister's neighborhood -- a public housing development.

"Obviously, we have a rapist in Lincoln Park," Dodson told the camera. "He's climbing in your windows. He's snatching your people up, trying to rape 'em. So you all need to hide your kids, hide your wife, and hide your husband, 'cause they're rapin' everybody out here."

Within hours, the story made its way onto YouTube.

"I have done interviews on the news before ... When this happened, I was like, wow, I can't believe it went crazy like this," says Dodson, adding that people now stop him on the street and call him the "YouTube guy."

To date, millions have watched the original news story.

And millions more have watched a music video spoof dubbed the "Bed Intruder Song," made by two men known as the Gregory Brothers.

A Way Out Of The Hood

Before his newfound Internet fame and subsequent earnings, Dodson family was of modest means. The 24-year-old is the oldest of six children and says helping support his family and protecting them from potential dangers of inner-city life is nothing new.

"It's pretty much a daily job for me," he explains.

In an interview with NPR's Allison Keyes, Dodson says his sister Kelly initially pressed him to ignore the media attention, which she felt would make him look like a "fool."

But Dodson, a product of the social media generation, says he immediately pegged his Internet fame as a vehicle out of poverty.

"I said, Kelly, this could be an opportunity for our family to get out of the 'hood," he recalls.

So far, the success has been sweet. He now has a blog and thousands of followers on Facebook and Twitter. And he says he's earning a profit from iTunes downloads of the "Bed Intruder Song."

He also has a merchandise section on his website, where visitors can buy T-shirts emblazoned with such phrases as "You are so dumb," which he told his sister's attacker in the newscast. He also has a telephone "fan line" in the works, where he hopes to console victims of sexual violence, and their loved ones.

His situation has led some social critics to question whether Dodson's fame is the product of just innocent intrigue. Others criticize what they see as a caricature of a poor, openly gay black man living in the ghetto.

But Dodson, who also works as a hairstylist, takes issue with that.

"It's sad that people have so much [that's] negative to say about this matter," he says.

And Then There's The Race Issue

Has race played a role in advancing his fame?

In fact, Dodson credits the popular music video "Bed Intruder Song" -- made by two young white men -- with helping his family cope with their trauma.

Dodson says his sister's attacker has yet to be caught. But his family is moving on.

In the meantime, the Internet star frankly admits he has every intention of capitalizing on his moment in the cyber-spotlight.