Accessibility links
Administrator Takes Over $20 Billion BP Fund Kenneth Feinberg assumed his role as head of the $20 billion compensation fund on Monday. Until now, BP had been handling the process. Will it get any better for the thousands of people still waiting for their money? 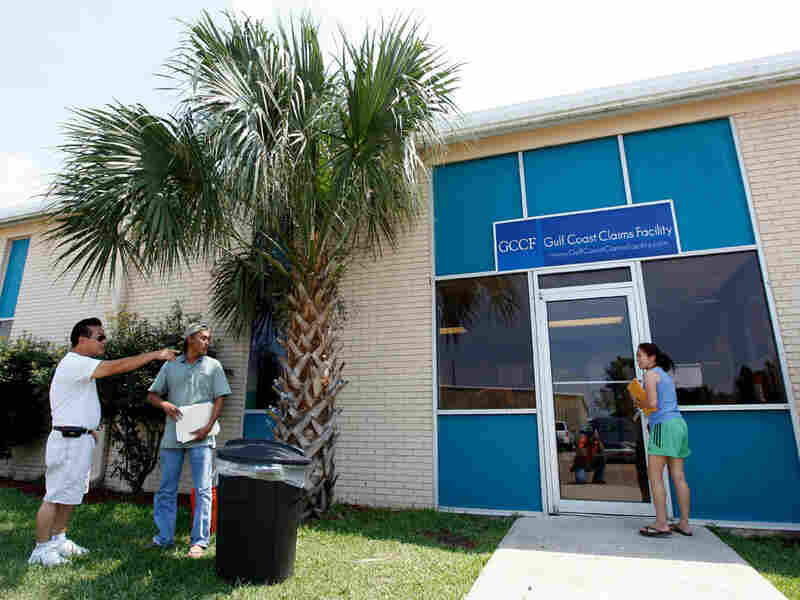 Local residents stand outside the new Gulf Coast Claims Facility on Monday in New Orleans. Led by Kenneth Feinberg, it replaces the claims process that previously was being handled by BP. Chris Graythen/Getty Images hide caption 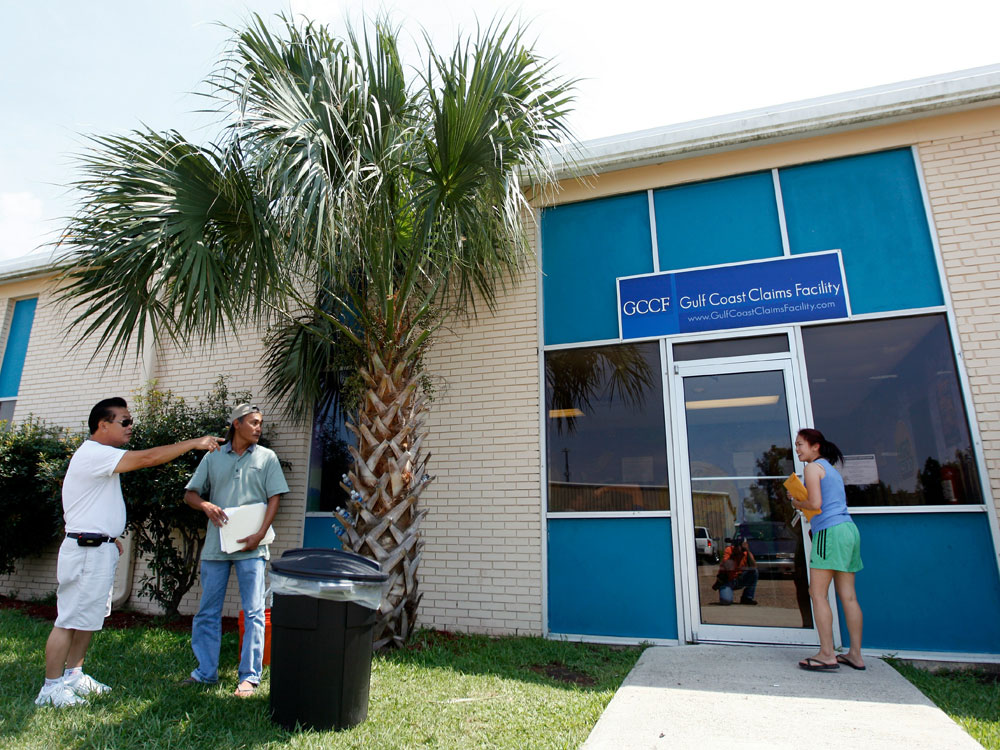 Local residents stand outside the new Gulf Coast Claims Facility on Monday in New Orleans. Led by Kenneth Feinberg, it replaces the claims process that previously was being handled by BP.

In the Gulf, thousands of fishermen and business owners affected by the oil spill disaster are filing new compensation claims.

Until now, BP, the company that created the spill, had been handling the process. But on Monday, independent administrator Kenneth Feinberg took over as head of BP's $20 billion compensation fund.

On Monday morning, Feinberg held a town hall meeting -- one of three held in the area -- in Biloxi, Miss., one of the hardest hit regions of the Gulf.

"The Gulf Coast Claims Facility has replaced BP," he announced, adding that he would now be handling claims for BP's oil spill victims.

"I understand completely the frustration, the anger, the uncertainty," he said after the meeting. "I'm here to explain what I can do and what I can't do. I can't solve everybody's problems, but at least I can address the financial uncertainty they confront as a result of that spill."

One thing Feinberg promised was prompt answers: "They might not always like the answers, but answers they will get," he said.

After explaining his plan, Feinberg heard from shrimp fisherman Lawrence Simpson, who was unsure how to make a claim for the business he started with his wife. Five years ago, they lost their house to Hurricane Katrina, and now with the Gulf spill, their boat is useless.

"BP says, 'If you don't have a business plan, we're not going to give you anything,' " Simpson told Feinberg. "But we wiped out our life savings to put this together."

Feinberg assured him that he can file a claim for money he lost putting together the business, and can estimate how much he would have generated if the spill hadn't occurred.

Feinberg pointed out that BP has paid out nearly $400 million to individuals and businesses harmed by the disaster. And he insisted it was his idea, not BP's, to require that anyone who receives a final settlement from the $20 billion compensation fund give up the right to sue the oil company.

"The money's in the bank," Feinberg said. "We've got billions ready to pay claims."

Feinberg addressed concerns over whether or not he could be trusted to act as an independent administrator.

"All the talk in the world won't convince people," he said. "The only real test is how quickly I process claims, evaluate them, make a calculation to what should be calculated, and get the checks out the door."

Feinberg promised it will now take two days for fishermen to get their money after their claims are processed, and seven days for businesses.

But some, like shrimp and oyster fisherman John Franklin, are unconvinced.

"I'm [going to] wait and see, just like everything else BP said. This man here," said Franklin, pointing to Feinberg, "I hope he's honest with what he says. He acts honest, he sounds honest. We're gonna have to wait and see."

Like many other fishermen in Mississippi, Franklin had a few weeks of work cleaning up the oil mess. But he's uncertain about the future. The traditional oyster season is about to start, but he's seen oil on all the oyster reefs.

"We don't know what it's gonna do down the road," Franklin said of the oil and the dispersants used to clean it up. "We don't know if it's gonna kill us, give us cancer -- we been working in it, though."

As he waits for monetary compensation, though, Franklin won't be eating the shrimp and oysters he manages to catch this year.