Third of a three-part series 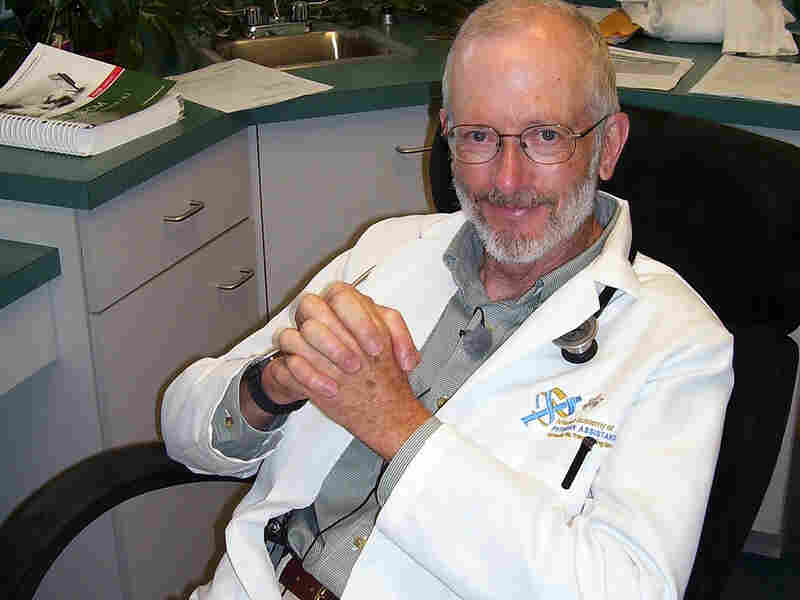 In the future, physician assistants like Jim Love could could be playing a bigger role in primary care. Julie Rovner/NPR hide caption 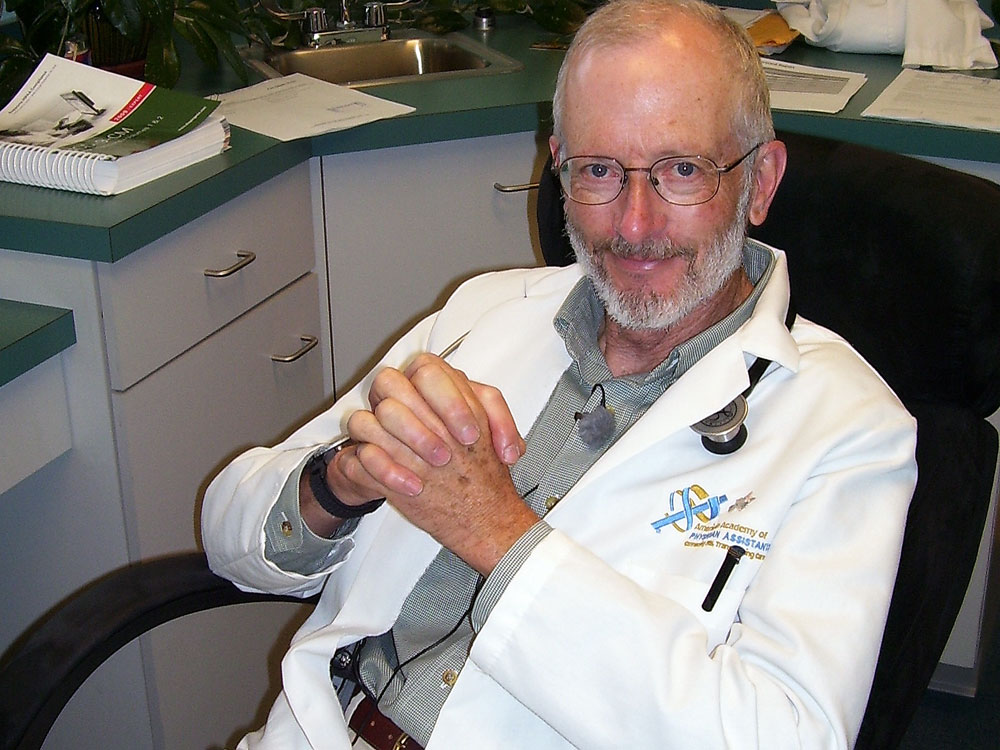 In the future, physician assistants like Jim Love could could be playing a bigger role in primary care.

Increasingly, the doctor is not in when it comes to delivering primary care. But the nurse practitioner or physician assistant is often taking the doctor's place.

"We are ideally suited for it. And it's so cost-effective compared to any other form of medical provider," says Jim Love, a physician assistant from rural Pittsfield, Maine. "We need to be educating a lot more of us."

Michael McDonald, the primary care physician who supervises Love from 25 miles up the road in Dexter, Maine, agrees.

Unlike physicians in primary care, the number of physician assistants and nurse practitioners are on the rise. According to the American Academy of Physician Assistants, there were 74,100 physician assistants in practice in 2008, the most recent census available. It's projected to be the second-fastest-growing health profession, after home health aides, in the coming decade. As of 2010, there are 135,000 practicing nurse practitioners, according to the American Academy of Nurse Practitioners, with an additional 8,000 being added to the ranks each year.

And nowhere are they needed more than in rural areas. According to the policy journal Health Affairs, 21 percent of the nation's population lives in rural America, but only 10 percent of the doctors practice there.

About This Series: Primary Care Under Pressure

Many health experts are predicting a major shortage of primary caregivers in the near future. Yet fewer medical students than ever are choosing primary care as their profession.

That's abundantly clear to Love, who's been practicing in Pittsfield -- population around 4,200 -- for more than 20 years.

His day starts early -- around 5 a.m. -- when he gets up to tend to his dog, Nikita, and three cats. His wife has already left for her job at the nearby hospital.

Around 6 a.m., he hops on his recumbent bike for the 10-minute ride across town to Sebasticook's clinic up the hill, stopping to show his visitors the town's resident loon pair that's nesting at the foot of the local dam. Ever the caregiver, Love is worried because no eggs have hatched yet and it's pretty late in the season. "A chick -- it's going to be hard to get raised and get out of here in time before cold weather," he says.

By the time he gets himself situated in his office it's about 6:30 a.m. He fires up the clinic's electronic medical record and sees what's already shaping up to be a busy day. 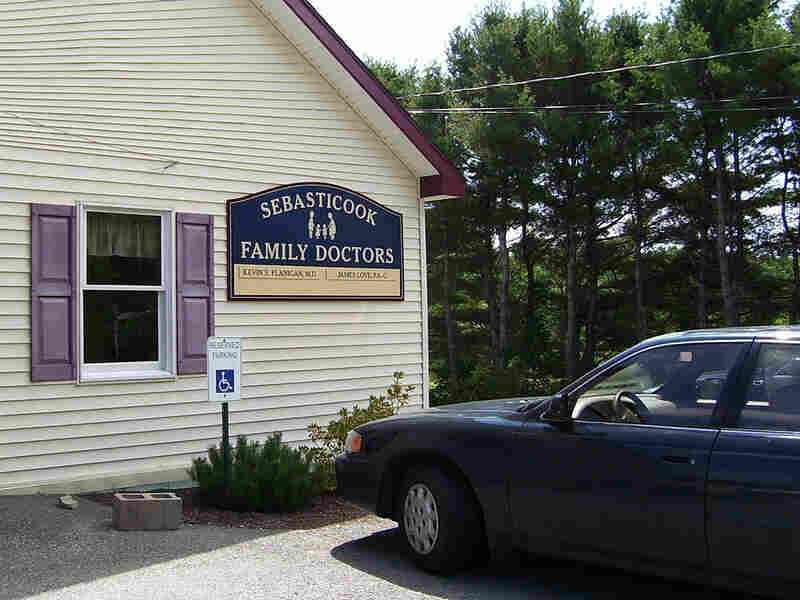 The doctor who used to share this branch of Sebasticook Family Doctors with physician assistant Jim Love quit. So, many of that doctor's patients are now becoming Love's patients instead. Julie Rovner/NPR hide caption 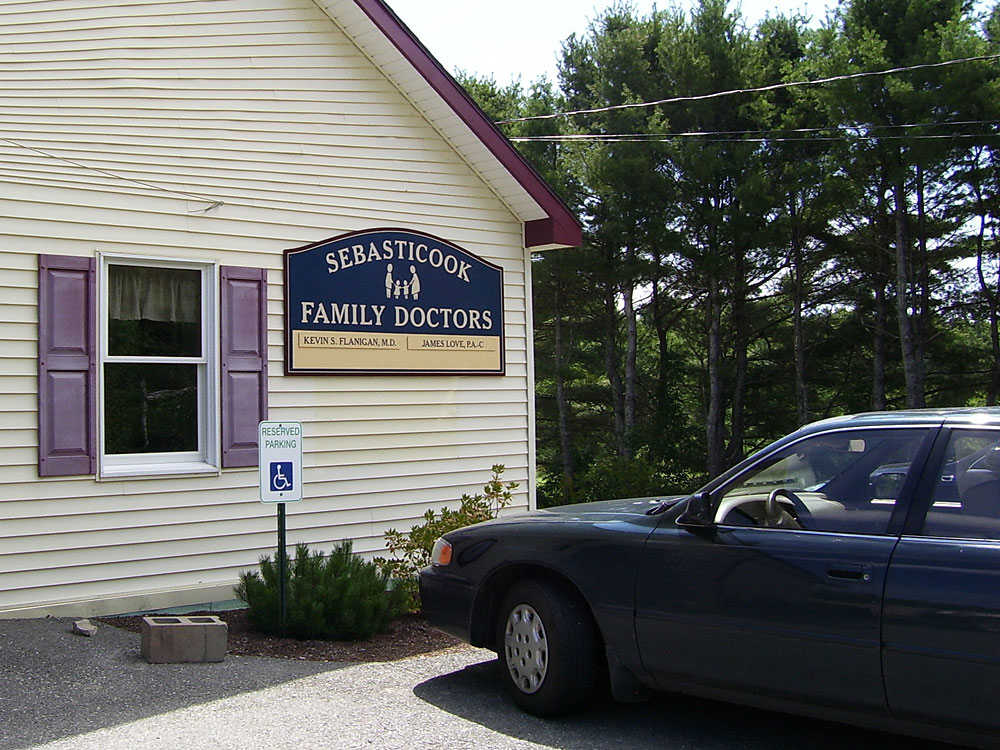 The doctor who used to share this branch of Sebasticook Family Doctors with physician assistant Jim Love quit. So, many of that doctor's patients are now becoming Love's patients instead.

"So far today, we're booked for 22 patients, and the phone line hasn't opened up yet," he says.

One of the things that's making Love busier than usual this day is that the doctor who used to share this branch of Sebasticook Family Doctors with him quit the week before. So, many of that doctor's patients are now becoming his patients instead.

And most don't seem to mind that he's not, technically, a doctor.

"I think he's better than any medical doctor I've been to," says patient Robert Marshman, who's from nearby Exeter, Maine. "And I've said that to everybody I've talked to."

Love, who's 62, did originally plan to become a doctor. But he couldn't get into medical school out of college. He worked for several years as a registered nurse instead. When he decided to go back to school in the mid 1970s, he was urged to go to medical school. But even then, he was put off by the financial commitment -- particularly since he had a wife and young child.

In fact, one of the things that makes Love so good at his job is that he knows what his limits are. "I'm experienced and I'm confident, all that kind of good stuff," he says. But, "I'm not an internist. And I tell my patients that. ... I just don't bring the same sophistication that a really skilled internist [does], and I shouldn't. I couldn't."

Michael McDonald, Love's physician supervisor, says that's one of the things that have made him so comfortable working not just with Love but with the other physician assistants and nurse practitioners in his practice.

"They know their boundaries; they know when to say when," he says. "All the midlevels I deal with in this organization know exactly when they feel uncomfortable with a situation" and need to turn to one of the practice's doctors for help or advice.

More From 'Primary Care Under Pressure'

But meanwhile, having the extra practitioners helps the practice serve some 8,000 patients over 20 towns in four counties in central Maine. "It works out well," McDonald says. "It helps our patients get access to care and provide good quality medicine."

One big advantage, says McDonald, is that it's been easier to recruit midlevel practitioners to the practice than doctors.

"It's been very difficult to get M.D.'s to come to the area," McDonald says. "And if they do, they don't stay for very long, and they leave. All of our nurse practitioners and PAs have been here almost since the beginning, since we've started."

Love, in fact, has lived in Pittsfield since 1986. And he says he has no intention of leaving. At least not until he retires. There's this sailboat he built that he'd like to spend more time with.

But, at least for now, he's content to just have sailing-themed pictures decorating his office. "I really am dedicated to this practice," he says. "And taking care of the people we take care of. I really want this to succeed."