Accessibility links
Is 'Giving The Finger' Getting Out Of Hand? There's something different about the way more and more people are expressing their anger these days. We can put our finger on it.

Is 'Giving The Finger' Getting Out Of Hand?

Is 'Giving The Finger' Getting Out Of Hand?

With increasing frequency it seems, we hear stories about somebody giving somebody "the finger." 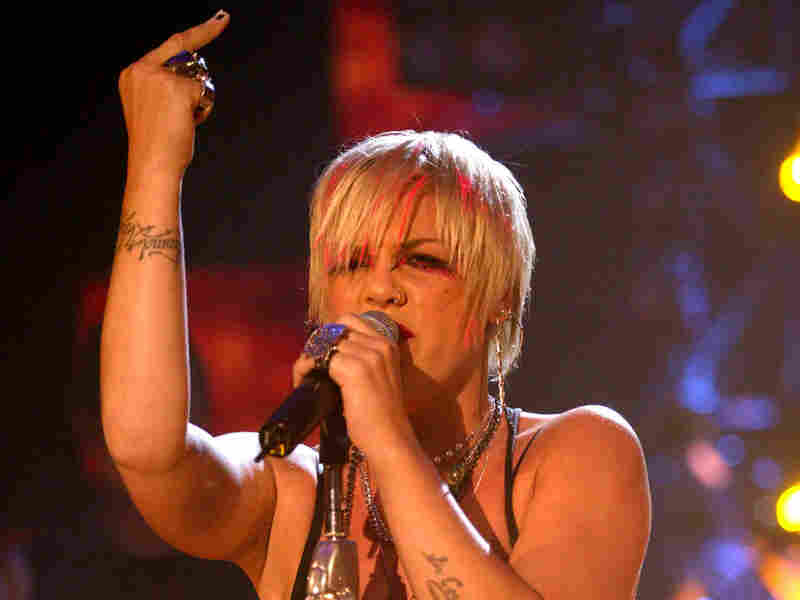 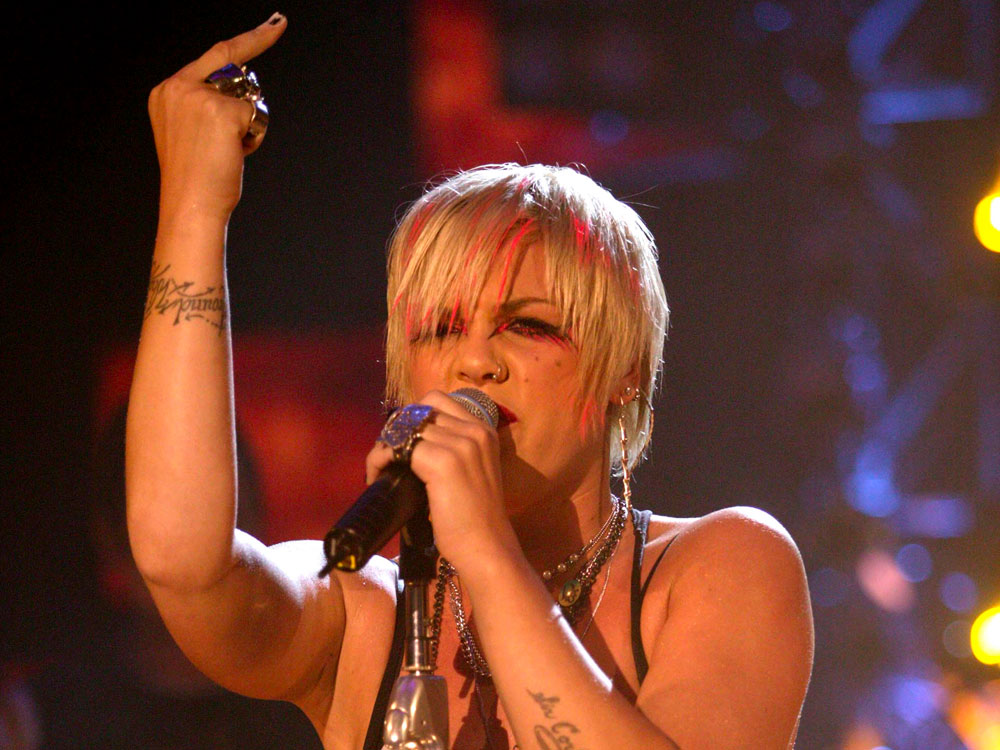 Pink lets her bird fly during a concert in London.

Earlier this month, former New York mayor David Dinkins was on his way into Rep. Charles Rangel's 80th birthday party in Manhattan when a heckler yelled, "You know you are attending a party for a crook!" According to The New York Times, the 83-year-old Dinkins, "a paragon of statesmanship and dignity, raised his middle finger at the man, displaying it for all to see."

A few days later, a BBC weatherman unfurled his middle finger at a colleague, unaware that the camera was rolling. The British broadcasting company issued an apology to viewers.

Why? Why apologize for something that we now see just about every day? On streets, in stores, in schools, on the news. People are extending their middle fingers as a silent, but effective -- sometimes too effective -- way of saying "go to hell," "up yours" or "(insert nasty-sounding verb here) you." It's also known by a few other handles, such as "shooting the bird" and "flipping off." But whatever you call it, it's become commonplace.

This summer, actor Zac Efron of High School Musical fame invited his fans to "give cancer the bird." He solicited photos of groups of people wearing anti-cancer wristbands and extending their middle fingers.

You can buy middle-finger wallpaper for your smart phone. There are even cute little finger-flashing emoticons for your instant messages.

I can't think of another gesture that is as well known and is more insulting in American culture.

In North Dakota this summer, a poster was hanging in the state's public service commission office "giving the finger" to President Obama, according to The Bismarck Tribune. Meanwhile, The Arizona Republic reports that in west Phoenix, people who are angry about a series of streetside murals promoting racial harmony are giving the finger as they drive by.

A news database search shows that media mentions of the phrase "giving the finger" between 2000 and 2010 was triple the number of mentions between 1990 and 2000. Granted, it's a crude index. But it's a crude gesture.

In March, The New York Times explored the increasing prevalence of people giving the finger and its legal ramifications. Reporter Jan Hoffman wrote: "How should we regard the Gesture? Criminal offense, merely offensive or ... no big deal?"

Hoffman pointed out that when a citizen shot the bird at a sheriff's cruiser in Oregon in 2007, the citizen was given a traffic citation. Claiming the right to free speech, the citizen sued. "The long arm of the law should not extend to the middle finger," American University criminal law professor Ira P. Robbins told Hoffman. "That's not to say it's smart to give the finger to a police officer."

UC Davis Law Review: 'Digitus Impudicus': The Middle Finger And The Law
Wired.com: Flipping Off Cops Is Legal, Not Advised

The article also quoted John McCarthy, who teaches sportsmanship at the Yogi Berra Museum in Little Falls, N.J. "Because it's so prevalent, the shock value has gone from it," McCarthy said.

"My take on 'the bird,' its frequency of use, and its loss of shock value goes back to the general erosion of shame in our culture regarding the use of profanity -- verbal or nonverbal," Lesley Withers says. As evidence, she cites a 2008 study by the Parents Television Council showing that profanity on TV has increased since 1998 and that the profanity being used has become harsher -- and occurs more often during earlier prime-time hours -- since that time.

"As our culture becomes more narcissistic and entitled," she says, "we reject the shame that has accompanied the use of profanity in the past." And the use of the middle finger.

The Internet is littered with photos and reports of all kinds of famous people giving fingers to the paparazzi, fans, detractors, each other or the world at large. Whole websites are dedicated to the practice. A quick whirl around the Web and you find athletes (from the NFL's Michael Vick to Major League Baseball's Jack McDowell); musicians (from Johnny Cash to Pink); actors (from William Shatner to Kristen Stewart) and countless webcam aficionados flashing middle digits.

Politicians, charged with bringing people together and finding common ground, have also been known to flip a bird or two. And it's a bipartisan phenomenon. Dinkins is a Democrat. But there's an infamous video, posted by Salon.com in 2004, of President George W. Bush (while he was governor of Texas), preparing to appear on camera, shooting the bird, then laughing and calling the gesture "just a one-finger victory salute." And one of the most famous finger givers of all time was another Republican, Vice President Nelson Rockefeller, who gleefully flipped off hippie hecklers during a 1976 campaign rally in Binghamton, N.Y. 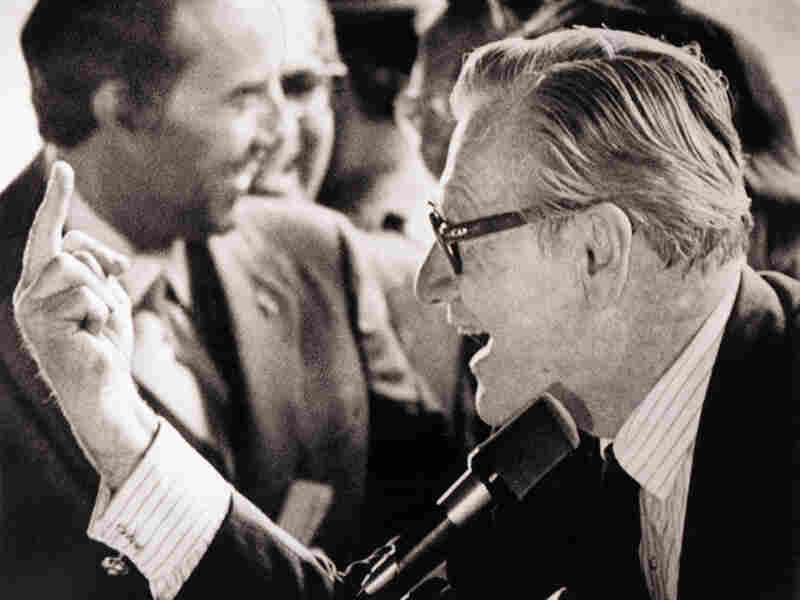 Rockefeller (with then Sen. Bob Dole in the background), showing hippie hecklers what he thought of them in 1976. Bettmann/Corbis hide caption 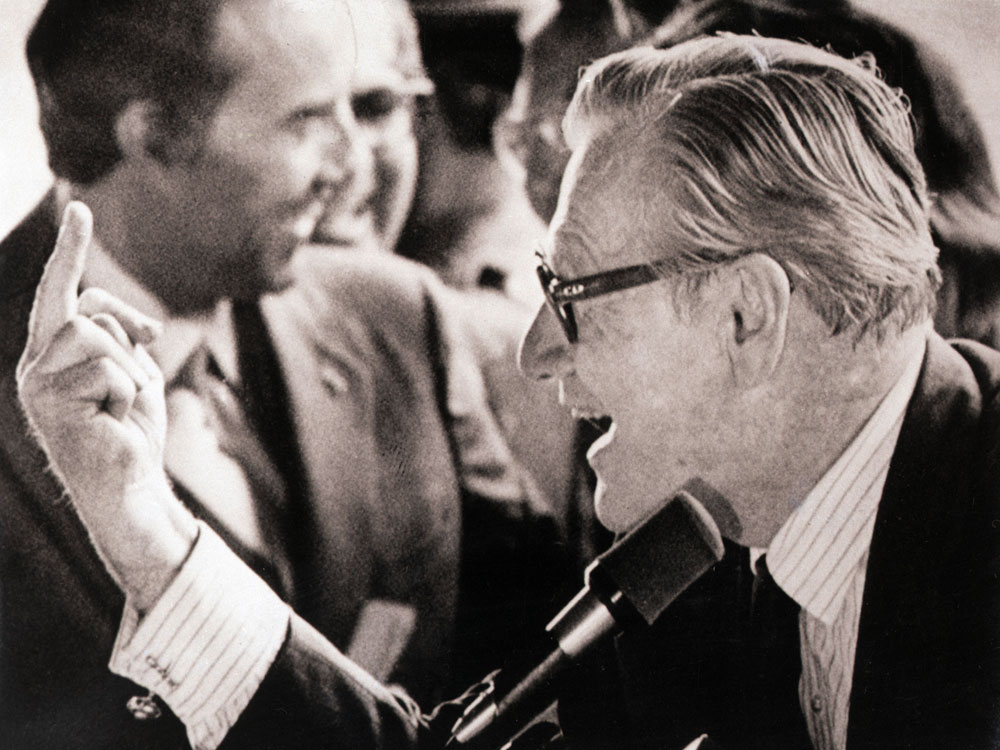 Rockefeller (with then Sen. Bob Dole in the background), showing hippie hecklers what he thought of them in 1976.

At the time, Rockefeller's finger flashing was scandalous. Writing about the moment 20 years later, Michael Oricchio of the San Jose Mercury News said the action became known euphemistically as "the Rockefeller gesture."

Oricchio also gave a thumbnail history of "the finger." The gesture goes back at least a couple of thousand years. In ancient Rome it was known as "the digitus impudicus" which meant the "impudent finger" or "dirty finger." In the United States the practice was first reported in the late 19th century.

Shooting "the bird," says Lesley Withers, "has been our most insulting gesture for some time."

She says, "I can't think of another gesture that is as well known and is more insulting in American culture, though others might be more shocking. Mooning, while also insulting, carries the risk of legal repercussions, as it also constitutes indecent exposure when used in public. That difference may explain why it, unlike 'the bird,' still retains its shock value."

So what next? What if "giving the finger" is becoming so ordinary that it's losing its sting? Mark L. Knapp, professor emeritus of communications at the University of Texas at Austin and a longtime chronicler of human behavior, says, "If a group of people become inured to the finger gesture … my guess is that you'd have to give the finger with more force or make a dramatic facial expression to go with it."

Or perhaps, he suggests, people who are really ticked off and can't keep their hands in their pockets and their anger in check should "give the finger with both hands."

Doubling down on the digitus impudicus, he says, just might "restore its emotional life."