Accessibility links
More People Buying Lottery Tickets Despite Recession Nationally, lottery sales were up $1 billion over the past year. More than half of states are now selling multistate lottery tickets -- which has increased sales as more people are lured by the chance to win a huge jackpot. Some buyers think they'll make it rich, while others find cheap entertainment in the $1 tickets. 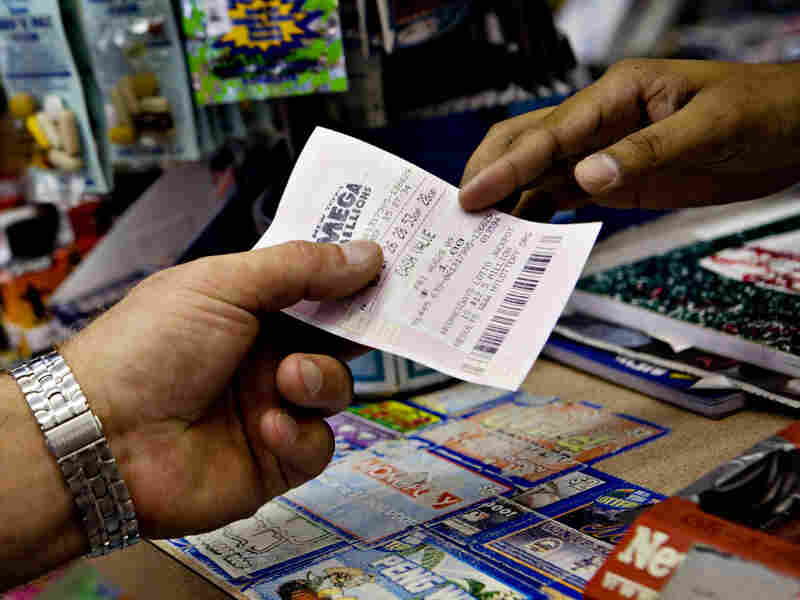 A salesman hands a customer a Mega Millions ticket in a New York deli last August. Despite the recession, national lottery sales were up $1 billion over the past year. Daniel Acker/Bloomberg via Getty Images hide caption 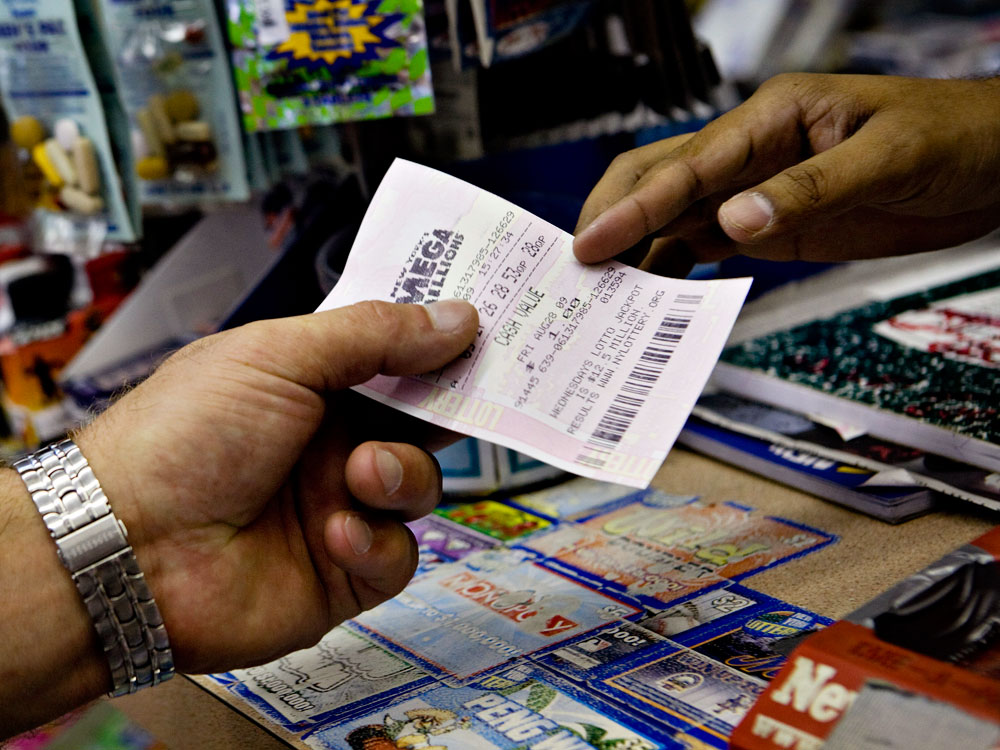 A salesman hands a customer a Mega Millions ticket in a New York deli last August. Despite the recession, national lottery sales were up $1 billion over the past year.

The recession has affected families in different ways. Some say they're cutting back on eating out. Others are not using their credit cards as much.

But one thing many are not cutting back on is buying lottery tickets. It seems the lottery is one industry that is almost recession-proof.

A Goal Of Making It Rich

At a gas station and convenience store off Roswell Road in Atlanta, many say they play the lottery occasionally -- though not every week.

Rick Hankin says more people he knows are buying tickets, in spite of the recession.

"As a matter of fact, it's ironic because my mom, her house was being foreclosed on and she was buying more lottery tickets than she normally bought," he says. "And I was like, 'Snap out of it.' But we got her house taken care of."

Nationally, lottery sales were up $1 billion over the last year.

I feel like someday I'll walk in there and get that ticket and not pass out when I find out I won.

At another convenience store, many breeze in and out to buy quick picks or scratch-off tickets. Saran Phillips says the higher the jackpot, the more she plays. "Because I want to win," she says. "I feel like someday I'll walk in there and get that ticket and not pass out when I find out I won. And the rest: Woo-hoo! Shopping spree, maybe a house, possibly a business."

That goal of making it rich is one reason most state lotteries have held steady or shown revenue increases. Arkansas just began its lottery and has far exceeded projections. The state estimated it would take in half a million dollars a day but instead is raking in more than twice that.

"We estimate that conservatively about $100 million in Arkansas money was already going out of state to lotteries. So that money, we believe, has come home," says Julie Baldridge, a spokeswoman for the Arkansas Scholarship Lottery.

A Cheap Form Of Entertainment

More than half the states are now selling multistate lottery tickets, including Mega Millions and Powerball games. And that has increased sales as more people are lured by the chance to win a huge jackpot.

"The jackpot games are extremely popular -- and that's the lotto games," says David Gale with the North American Association of State and Provincial Lotteries. Forty-three states and the District of Columbia have lotteries, and Gale says people are still playing the games, even during the recession.

"They probably have less discretionary dollars left over at the end of their budget so they're probably looking for cheaper forms of entertainment," he says. "Lottery tickets typically cost a dollar. The other reason is because it's such an inexpensive product that it's probably not one of the first things that's cut from their regular monthly budget."

Gale also says most people approve of lotteries because they provide billions of dollars to state budgets and to retailers who receive commissions. He says last year $60 billion was returned to states that are all facing stiff budget deficits and looking for ways to raise money.

Not All Lotteries Raking It In

But not all lotteries are doing well. In West Virginia, total lottery revenue was down about 10 percent in the latest budget year. Officials there blame the recession and competition from video lotteries in surrounding states.

In Georgia, the lottery is doing well and provided $884 million for the state in the past year for college scholarships and prekindergarten programs. Even during the recession, states continue to add lottery games and look for new ways to promote them.