Accessibility links
Marines Need To Regain 'Maritime Soul,' Gates Says For the past decade, the Marine Corps has been fighting in the deserts of Iraq and Afghanistan. Defense Secretary Robert Gates says the U.S. doesn't need a second land Army. The Marines must be able to get ashore quickly and tackle small guerrilla wars that will be common in the coming decades. 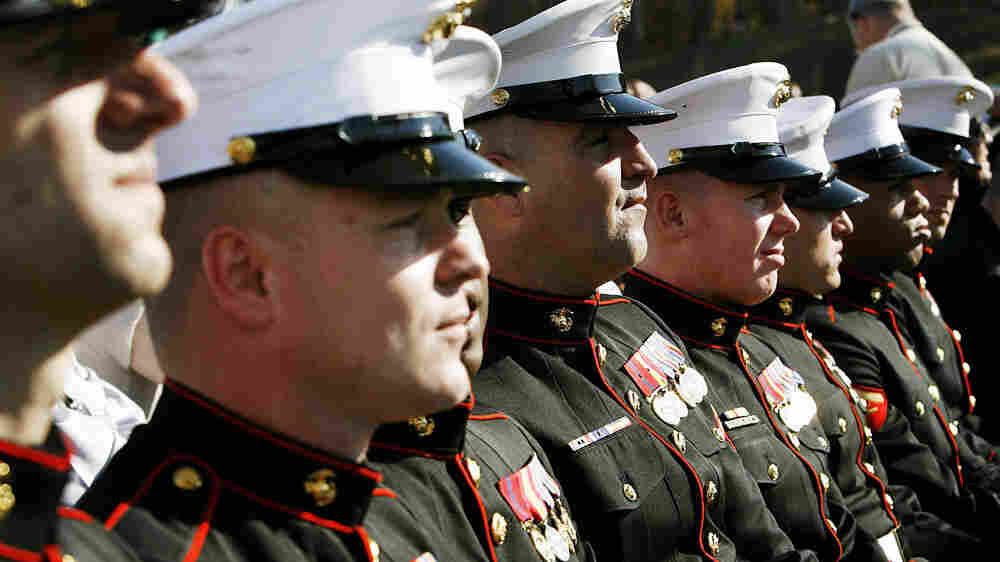 U.S. Marines wait for the beginning of the dedication ceremony of the National Museum of the Marine Corps in November 2006 in Quantico, Va. For more than 200 years, the Marine Corps has been hitting the beaches. But over the past decade, the Marines have operated like a smaller Army in Iraq and Afghanistan, far from the water's edge. Chip Somodevilla/Getty Images hide caption 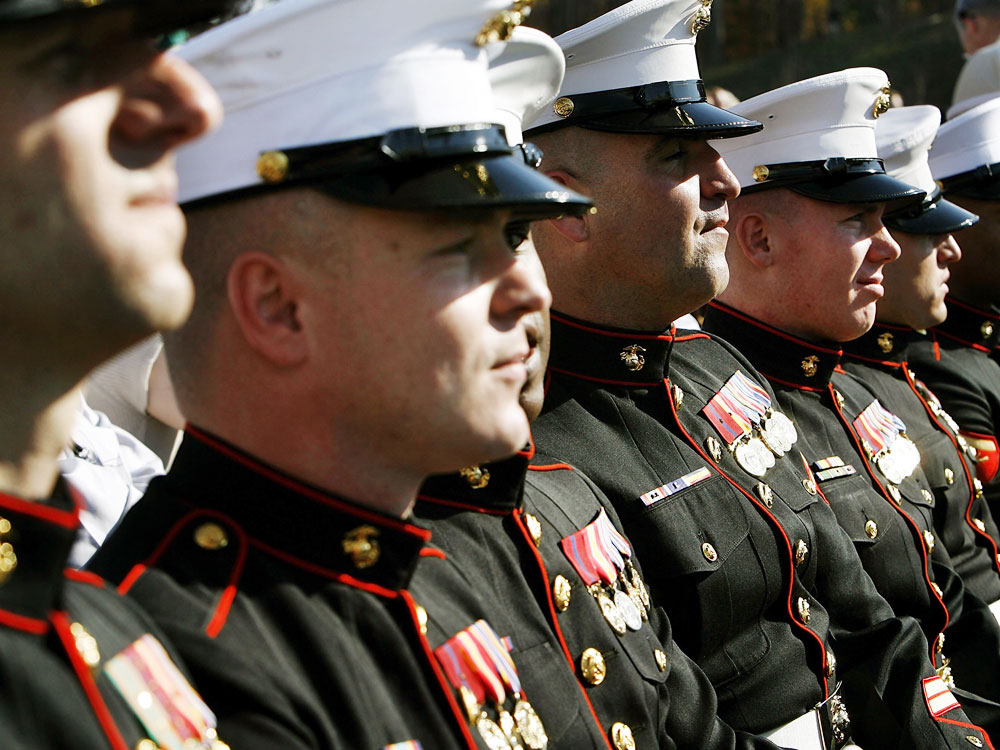 U.S. Marines wait for the beginning of the dedication ceremony of the National Museum of the Marine Corps in November 2006 in Quantico, Va. For more than 200 years, the Marine Corps has been hitting the beaches. But over the past decade, the Marines have operated like a smaller Army in Iraq and Afghanistan, far from the water's edge.

For more than 200 years, the Marine Corps has prided itself on dramatic amphibious landings.

That ability is enshrined in the first lines of the Marine Corps hymn, "From the halls of Montezuma to the shores of Tripoli," celebrating 19th century landings in Mexico and Libya. Marines went on to storm the beaches in places like Tarawa in World War II, Inchon in Korea and Da Nang in Vietnam. They were often called "Soldiers of the Sea."

But for the past decade, Marines have fought in the deserts of Iraq and Afghanistan. Gen. James Conway, commandant of the Corps, says there is a generation of Marine officers who have never stepped aboard a ship.

As a result, the Marine Corps has earned a different nickname.

"The Marines in Iraq and Afghanistan have functioned for years as a so-called second land Army," Defense Secretary Robert Gates said recently, speaking to the Marines' Memorial Association in San Francisco. "Fundamentally, the Marines do not want to be -- nor does America need -- another land army."

No one in the Pentagon is proposing to do away with the Marine Corps, as the Truman administration did just after World War II, suggesting that it was a redundant force.

America needs the Marine Corps, Gates said, but the Marines must preserve what he calls their "maritime soul."

They must be able to get ashore quickly and tackle the small guerilla wars that will be common in the coming decades, Gates said. And he says the Marines are among the best in handling that complex blend of fighting and rebuilding known as counterinsurgency. 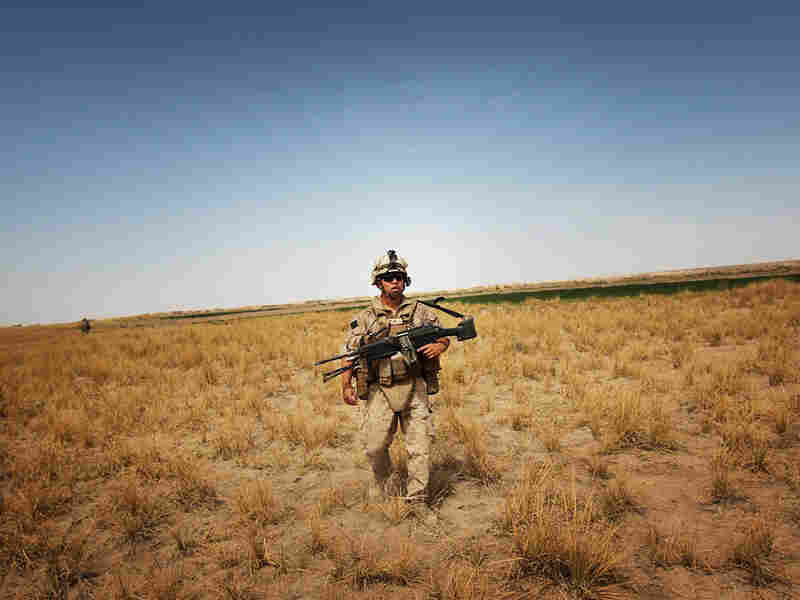 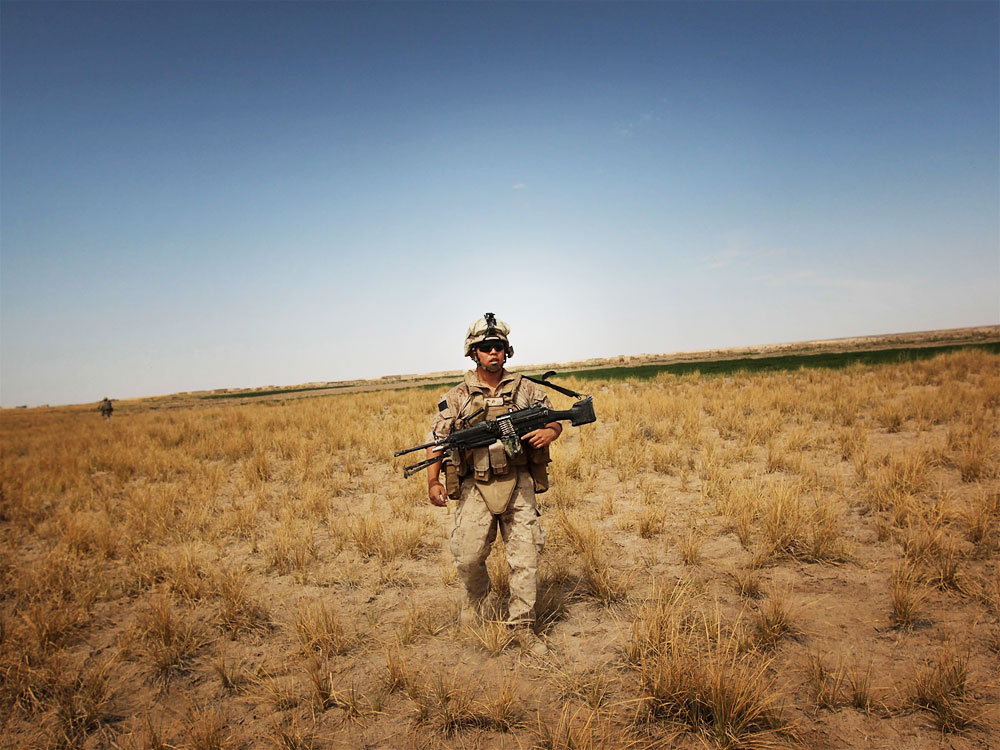 U.S. Marine Lance Cpl. Josh Yang marches through rural scrubland near Khan Neshin in Helmand Province, Afghanistan, in March. Defense Secretary Robert Gates says the Marine Corps has gotten away from its "maritime soul" while working in the desert.

"The counterinsurgency skills the Marines developed during this past decade, combined with the agility and esprit honed over two centuries, well positioned the Corps, in my view, to be at the tip of the spear in the future when the U.S. military is likely to confront a range of irregular and hybrid conflicts," Gates said.

Now, top Marine officials are figuring out just how they'll be at the tip of the spear.

Among them is Lt. Gen. George Flynn. He says the Marines' amphibious operations of the future will not be like the massive operations of the past. Fighting insurgents or guerillas is not like taking on a large standing army.

"We need to be able to project forces from the sea under uncertain conditions," Flynn said. "Are they going to be on the scale of Inchon or Iwo Jima? I don't think so."

How Big Should The Marine Corps Be?

At the center of the debate is how big the Marine Corps should be. The Marine Corps now stands at 202,000. That number reflects the increase of some 25,000 Marines in recent years to handle repeated deployments to Iraq and Afghanistan.

Some analysts say the Marine Corps may be trimmed by tens of thousands as both wars wind down in the coming years. Flynn says there's no sense yet how big the Marine Corps should be, until you answer this question: What jobs do you want the Marines to handle?

"What do you need to do to be able to execute, if you will, the national security strategy that we've been directed to execute?" Flynn said. "It gets you to the number of Marines you need to do it, it gets you to a different type of equipment. So rather than a number target, we want to focus on capabilities."

That's not just a capability to fight, says Flynn, but to assist in humanitarian catastrophes.

"Natural disasters that may occur in, let's say Haiti, or the tsunami relief, or more recently in Pakistan," Flynn said.

The other key question is how the Marines will get ashore in the future. The Marines want to replace their aging amphibious troop carrier designed some 40 years ago with a new one called the Expeditionary Fighting Vehicle.

But a recent government report questions whether the tank-like vehicle should be built, because of its performance failures and increased costs. Each vehicle costs about $24 million, nearly twice its original price tag.

"That's one that I think is primed to be cut," said Todd Harrison, a defense analyst with the Center for Strategic and Budgetary Assessments.

"The Marine Corps needs it. They say they need it if they want to maintain the capability of an amphibious assault," Harrison said. "But the fact of the matter is we haven't done that in a contested environment since Korea."

We need to be able to project forces from the sea under uncertain conditions. Are they going to be on the scale of Inchon or Iwo Jima? I don't think so.

Gates asks whether amphibious assaults are even possible anymore, given the growing availability of accurate, long-range missiles that are able to strike ships 60 miles at sea.

Flynn says that the Marines also come ashore by aircraft. But planes don't have the space for supplies and equipment that ships do. So the Marines need some type of armored vehicle that can drive to a beach.

"We need the capability," Flynn said. "We need to have an amphibious tractor to be able to do the things that we're being asked to do."

Conway, the Marines' top officer, says the Expeditionary Fighting Vehicle will soon be going through a series of operational tests.

"You know, the program is under continuous scrutiny," Conway recently told reporters. "It has been a beleaguered program, I think it's probably fair to say. But at this point, I think everybody's anxious to see how it performs."

The Marines say all these questions about the size of their force and the equipment they will use will all have to be worked out. And they don't seem worried.

Their incoming top officer, Gen. Jim Amos, recently told an audience that the Marine Corps has long been adept at quickly solving what he called "complex" and "nasty" security problems.

"Marines see plenty of work in the future," Amos said.