Accessibility links
Outsourced Call Centers Return, To U.S. Homes For years, Americans have had their customer service phone calls handled by people overseas. But the rising costs of foreign labor have led a number of firms to bring call centers back to the U.S., and they're hiring more and more people to work right in their own homes. 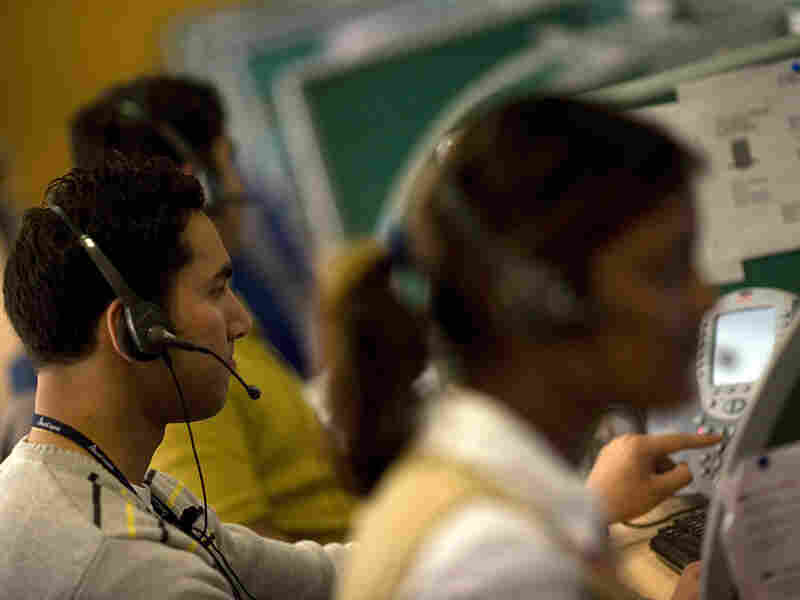 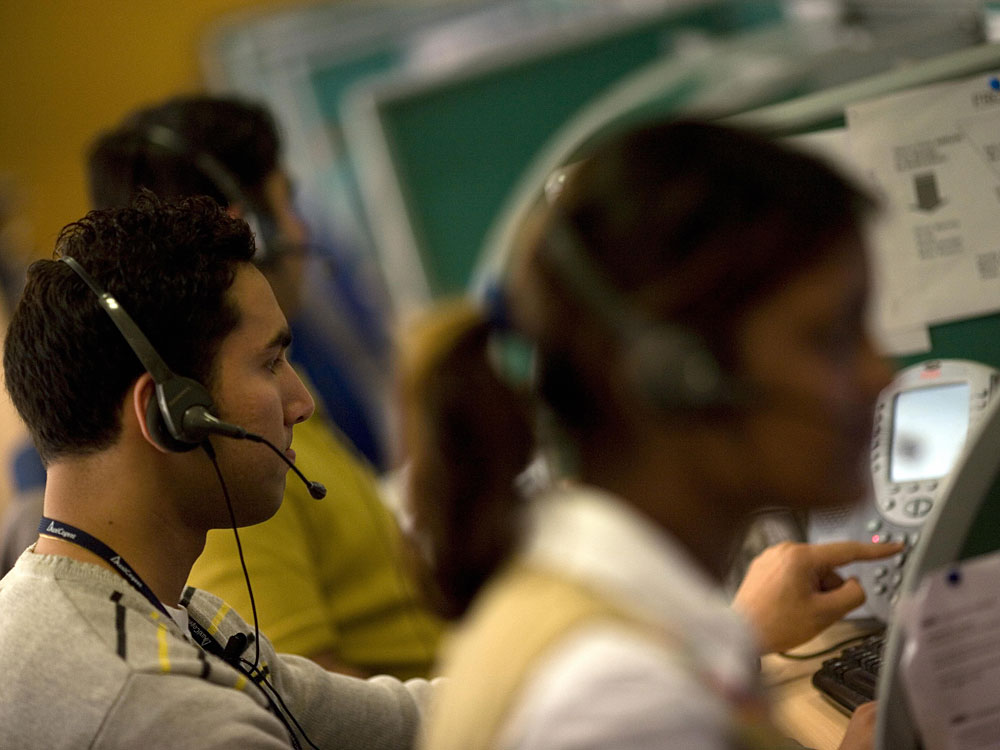 Indian workers answer telephone calls at a call center on the outskirts of New Delhi in 2008. Increasingly, American companies are employing U.S. workers to handle customer service calls in their own homes.

Maureen Quigley-Hogan is the next generation of call center worker.

Wearing pink slippers and sitting at her desk in her home office in Virginia, she takes a call from a woman in New Jersey who has a question about her credit card bill.

Quigley-Hogan was unemployed for 10 years because she couldn't hold down a traditional job, she says. She has rheumatoid arthritis and fibromyalgia, a disease that causes severe fatigue.

"It was hard to get to a job," Quigley-Hogan says. "The idea of going through a regular schedule of getting up and getting ready for work, I would be exhausted."

She worked in customer service for more than 20 years, so two years ago, she was thrilled to land this job where she can work from home.

American customers say they have more trouble getting inquiries resolved efficiently when they're routed to call centers outside the U.S.

The Contact Center Satisfaction Index is based on online surveys of more than 1,500 adults. Respondents called a contact center within the past month and spoke with a customer service representative. CFI Group used the American Customer Satisfaction Index methodology to conduct the research.

For years, Americans have had their phone calls about credit card bills and broken cell phones handled by people in the Philippines or India. But American firms are starting to bring call centers back to the U.S. -- and this time around, they are hiring more people to work in their own homes.

Ten years ago, it made a lot of sense to outsource these jobs overseas. But that's changing. Increasingly, companies that want to outsource their customer service jobs are happy with these domestic arrangements.

High inflation and double-digit annual raises in some sectors are pushing up the cost of labor in India. At the same time wages in the U.S. are falling and companies are rethinking the trade-offs associated with outsourcing.

Richard Crespin, director of the Human Resources Outsourcing Association, says when companies decide whether to outsource overseas they have to weigh the costs as well as "the inconvenience of having something distant from you and not close in proximity -- what I would call the pain-in-the-neck factor."

He says when wages drop in the company's home economy, those companies are less likely to outsource these jobs to other countries.

Experts say outsourcing is still accelerating for jobs in IT services and manufacturing. Phil Fersht, an outsourcing analyst, says even before the recession started, companies were starting to realize that offshoring wasn't the best option for other services.

In some cases, workers in India are making only about 15 percent less than workers in Nebraska, he says. That's the threshold where companies start thinking about whether it's worth it to hire an American worker instead of a foreign one.

Who's Taking Your Call?

American consumers expressed varying levels of satisfaction with call centers depending on whether the center is perceived to be overseas or in the U.S., according to a new report by the CFI Group. Here, a look at some of the findings:

— Callers said one of the biggest disparities between foreign and American call centers was the ease of understanding the customer service agent.

Home workers, such as Quigley-Hogan, represent one of the cheapest models for customer service. There are an estimated 60,000 people doing call center work from home.

"It provides a lower cost point than other traditional means of onshore customer service," says Chris Carrington, who runs Alpine Access, the Denver-based company that Quigley-Hogan works for. Carrington says the low overhead of having home-based workers allows him to charge 20 percent less for the same services provided by brick-and-mortar call centers in the U.S.

"We don't have big buildings and we don't have all of that infrastructure cost, and so we're able to pay our people more and as well as lower our price for the customers we serve," he says.

Even with these cost-cutting measures, American workers are still the more expensive option. But industry watchers say so-called home sourcing will continue to grow as companies look for quality that used to be harder to afford.