Accessibility links
Bucking The Trend: Primary Care Doc Practices Solo There's a catastrophic shortage of primary care doctors who provide basic health care. And the need is expected to grow as more people receive coverage under the new health law. Dr. Cathy Crute is one doctor who is holding on to her solo practice in Maine. 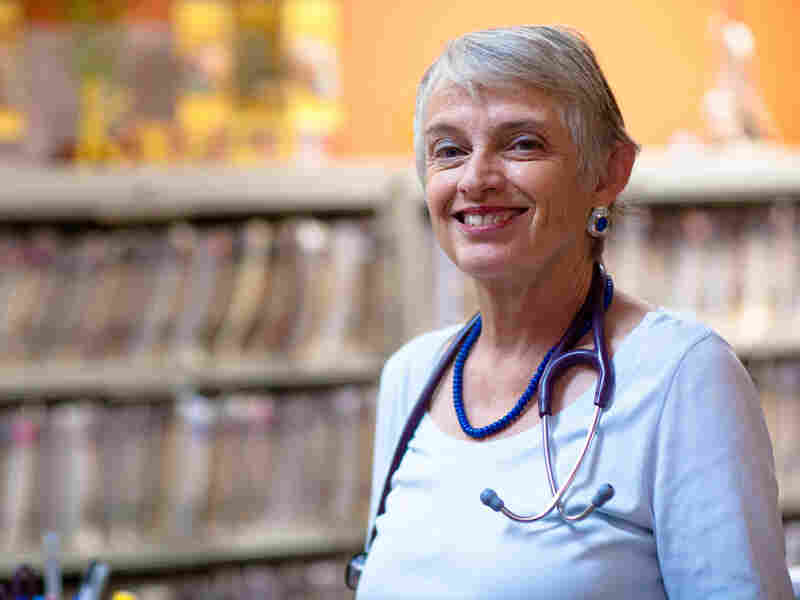 Dr. Cathy Crute, who has her own practice in Maine, says she brings a personal touch to primary care. Emilie Sommer for NPR hide caption 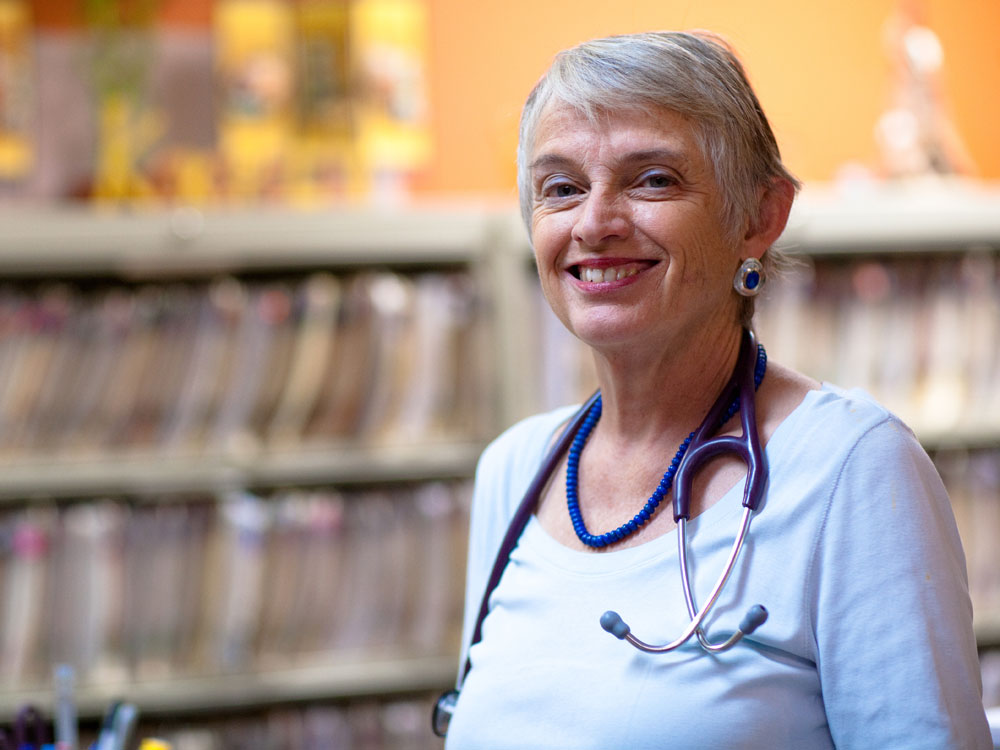 Dr. Cathy Crute, who has her own practice in Maine, says she brings a personal touch to primary care.

Conventional wisdom is that the age-old model of a single doctor serving patients out of a small office is rapidly going extinct. Doctors need to evolve or die. That means fancy new computerized medical systems and bigger groups to handle the overhead.

But Cathy Crute wants to get one thing straight from the get-go: She is not a dinosaur.

"No, no. I think patients love a small practice," she says from her rather Spartan office. "My receptionist can recognize a lot of patients' voices over the phone. They know who they're talking to every time. They don't have to go through a whole chain of command."

And the patients in the waiting room of her Portland, Maine, office seem to agree with that assessment.

About This Series: Primary Care Under Pressure

Many health experts are predicting a major shortage of primary caregivers in the near future.

A major reason is the graying of the massive baby boom generation: By 2030, 70 million Americans — 1 of every 5 — will be over age 65. And seniors need and use more medical care.

The new health law will also add to the demand for one-on-one care. By 2019, an estimated 32 million more Americans will have health insurance than have it now.

And for many patients, the shortage is already a reality.

Sixty-five million Americans live in areas designated by the federal government as having a shortage of health professionals. And a 2008 survey found that more than a fifth of Medicare patients and nearly a third of patients with private insurance reported an unwanted delay in getting an appointment for routine care.

Yet fewer medical students than ever are choosing primary care as their profession. Of the 24,000 medical students who entered residency programs this year, according to the New England Journal of Medicine, between 16 and 18 percent are likely to end up practicing primary care, which includes general internal medicine, pediatrics and family medicine.

Money is obviously a big reason medical students opt to become specialists rather than generalists. According to the 2010 survey by the Medical Group Management Association, the median primary care doctor salary in 2009 was $191,401. The median dermatologist's salary was $385,088, while the median salary for a cardiologist was $457,310.

For students graduating with medical school debt often in the six figures, that's not an insignificant difference.

But there are other reasons medical students shy away from primary care.

"When you survey medical students when they enter medical school, a very high percentage are interested in primary care," says Alain Montegut, vice president for primary care development at Martin's Point Health Care in Maine. "Then they lose that interest over that four years because they're not exposed to it. They don't have the role models, and the payment system is geared toward specialty care."

There is also the perception that primary care doctors work longer hours and have less job satisfaction than other types of doctors.

Health-policy makers are now trying to address all of those factors in efforts to "reinvent" primary care around the nation.

The new health law boosts payments for primary care — not just for doctors, but also for nurses and physician assistants who are also key primary caregivers, particularly in rural areas. It also expands programs that help repay student loans for health professionals who agree to practice in areas with shortages of health personnel.

Many states and health organizations are also experimenting with new ways to organize primary care practices. One that is gaining popularity is known as the "patient-centered medical home." The idea is to have health care providers — doctors, nurses and even social workers or nutritionists — work in teams to give patients a single place to get most of their medical needs tended to and coordinated. The idea is to take some of the pressure off overworked doctors and make care more efficient, cheaper and more pleasant for the patients.

This series will examine some of the pressures on the primary care system — and some of the potential solutions.

"I just think it's better service to come to the same person all the time and have one person overlooking you," says Laurie Warhol, from nearby Waterboro. She's been coming to Crute for more than a decade. "I think they know you better. They know your problems better. You don't have to remind them of everything all the time."

Patient Mike Greenleaf says he likes not just the doctor, but the entire atmosphere of the practice. "The staff's great, and they know you on an individual basis. And it just makes you feel that much better than if you just go sit in a room full of people and have someone call your name that doesn't know you," he said.

Crute actually came to her solo practice late in her career. She was one of the first doctors to become a certified family practitioner in the 1970s. She worked in a small group for 10 years -- and, later, a larger one -- before she realized that wasn't where she was comfortable.

After talking with some friends who were practicing solo, but covering for each other on nights and weekends, she decided to strike out on her own. "It was like, 'Yeah, I guess I can do it, too,' " she said.

That was 10 years ago. Since then, she's built a tight, efficient little team around her. So efficient, in fact, that Crute works only 3 1/2 days a week. She gets in around 8:15 a.m. and says she rarely leaves the office after 5:30 p.m.

But Asali, who chats between answering phones and greeting patients on the receptionist's day off, concedes her job is a challenge. "It's definitely a juggling act without having the overhead of a larger practice helping us," she says. "It's a game week to week, making sure we've got enough patients on the schedule."

Crute, however, says as long as the bills get paid, she's OK. She says she's definitely not in this for the money. "I'm driving a 10-year-old car," she admits with a laugh.

What Keeps Crute Up At Night

One thing she does wish, however, is that she and her staff could spend less time on insurance company bureaucracy.

"We have a part-time person just doing referrals," she says. "We also spend a tremendous amount of time on the phone with prior authorization for medications," which is medical speak for getting permission to prescribe a specific drug.

But what really keeps Crute up at night is what will happen to her practice -- and her patients -- when she retires. She's 63, and she says she plans to work for only about three more years.

So she's spending some of her time trying to recruit her replacement. Among her targets: the family practice residents currently in training at the nearby Maine Medical Center. She has all their photos hanging on the bulletin board in her office. But she knows that finding one to take on a solo practice won't be easy.

"It's probably going to have to be someone who doesn't have a huge debt," she says.

More From 'Primary Care Under Pressure'

That doesn't leave a very large pool of young doctors finishing their medical training. And she's competing for those residents with local hospitals and huge doctor groups like Martin's Point, located across town. Some on her staff derisively call it "Walmart." But Walmart or not, those employers can offer something she can't -- some certainty that they can begin to pay back their medical school loans.

"That's probably the biggest roadblock to having a small practice," Crute says. "Because I can't guarantee somebody a salary coming out of residency."

So for her patients and for Cathy Crute, the clock is ticking.

Why Picking A Doctor Is Harder Than Ever Aug. 3, 2010
Doctors Without Borders Challenges Wealthy Nations To Sustain AIDS Funding May 28, 2010