Accessibility links
Home Sale Woes May Rewrite Economic Playbook In past recessions, home sales helped lead the economy out of trouble. But this time, the economy may have to pull home sales out of the woods, rather than the other way around. 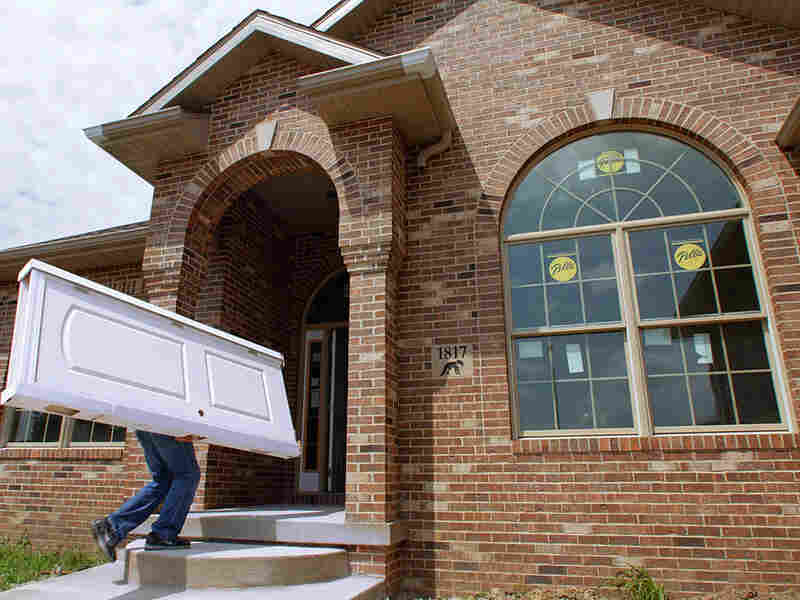 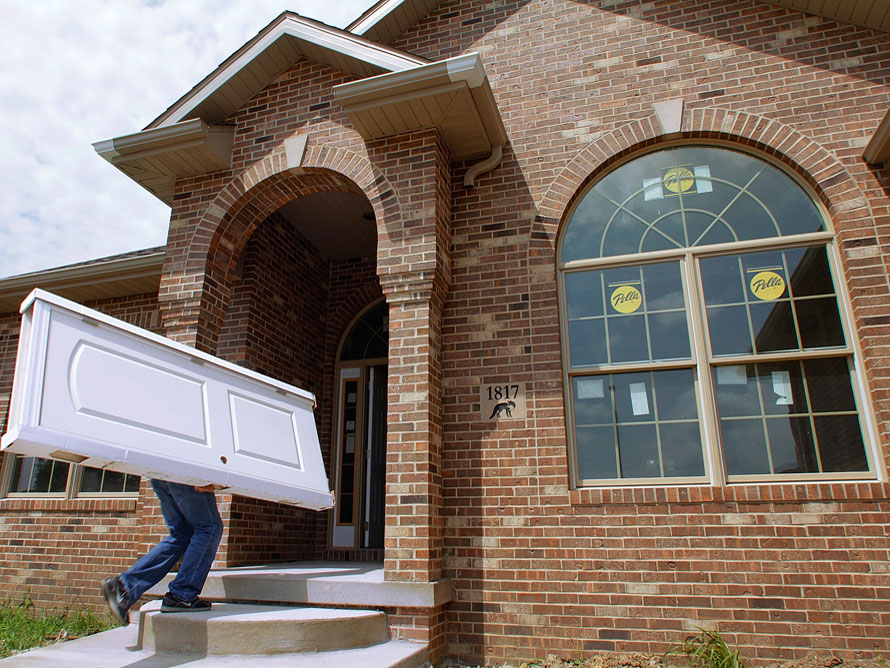 Construction worker Brian Stocks delivers doors July 15 to a new home under construction in Springfield, Ill. Homebuilder confidence dropped for the third straight month in August as the struggling economy and a flood of cheap foreclosed properties kept people from buying new homes.

Economists used to believe that an improvement in the housing market helps lead the way out of recession. But two sets of dismal numbers for the sector this week have twisted conventional wisdom.

The Commerce Department reported Wednesday that new-home sales had fallen 12.4 percent month to month in July, to a seasonally adjusted 276,000 units -- the slowest sales pace on record dating back to 1963. That report came a day after the National Association of Realtors said sales of existing homes had fallen 27 percent for the same month -- the worst showing in 15 years.

It's enough to "rewrite the playbook," said Bernard Markstein, chief economist with the National Association of Home Builders.

"This time around, it's going to have to be the economy that pulls the housing sector out of recession, instead of the other way around," Markstein said.

Last month, many economists factored in the hit housing would take as a result of the abrupt end of the government's buyer tax credit, which expired on April 30. But by July, the effects of that should have largely worn off, said Patrick Newport, an economist who tracks the housing sector for IHS Global Insight.

"The demand for housing is just very weak and with the expiration of the tax credit, it's becoming apparent just how weak it is," Newport told NPR.

Several factors are interrelated. High unemployment has dashed consumer confidence. Skittish consumers are reluctant to tie up their money in a 30-year mortgage. And the banks -- stung by their lending practices during the go-go years that ended abruptly in 2006 -- may have let the pendulum swing back too far in the opposite direction.

"I think it's related to confidence and ... employment growth. What really drives housing demand is job growth," Newport said.

Gus Faucher, director of economics for Moody's Economy.com, agrees. "People are anxious right now and they are thinking that perhaps this isn't a good time to by a new house," he told NPR. "They are going to wait until the economy picks up and they're sure they are going to have a job in six months."

For Marge McCreesh, an agent with Re/Max Elite Realty in Baltimore, the biggest battle is getting mortgage lenders to move the process along. "Good, rock-solid buyers are having a hard time getting money right now," said McCreesh, who has been in the business for 25 years. "Some people I can't help."

Tight lending practices have also hurt builders, who the NAHB's Markstein said are getting turned down for "viable projects" in which "the math all works out."

He said the lenders will eventually need to realize that they can't make money without taking some degree of risk. "I'm not talking about a return to the crazy times when you walked through the door and immediately got a loan," he said, referring to the once-common practice among some lenders of requiring little or no documentation for income and assets. "Nobody wants to go back to those days, but we do need to see a return to sensible lending practices."

Newport said a measure called the household formation rate tells a little about where the market is and where it is likely heading.

Under normal conditions, about 1.5 million new households are formed per year to absorb population growth. Instead, that figure has been flat in recent months. "There's been a lot of doubling up and because of that, household formation has been flat," said Newport.

Doubling up means "you have a scenario where the son or daughter in their 30s has lost a job and moves back in with Mom and Dad," said Markstein.

The good news for the housing market is that scenario can't last forever.

"We need job growth and once we start seeing job growth, people will start leaving those homes and 'undoubling,' " said Newport.

Faucher of Moody's Economy.com is optimistic that things will turn around for the housing market, but a few rough months are still ahead.

"It's going to take a combination of stronger demand and better confidence for households to be convinced that it's a good time to buy," he said. "But I think we'll see things start to improve in the spring of next year."