Accessibility links
Oil Boom Under Way In North Dakota In the past year, the number of oil drilling rigs has tripled and now stands at about 130. New technology has made previously unprofitable oil reserves there profitable.

In the past year, the number of oil drilling rigs has tripled and now stands at about 130. New technology has made previously unprofitable oil reserves there profitable.

We're going to hear now from a part of the country where an oil boom has pretty much staved off the economic downturn. North Dakota has the lowest unemployment rate in the nation: 3.6 percent for July. That's in large part because the state has doubled its oil production in just four years.

JEFF BRADY: Head out to the wheat fields south of Stanley, and the peace and quiet folks around here value is interrupted.

Whiting Petroleum owns this tall drilling rig and plans to drill about 400 wells in the region. It can take 20 days to drill just one, according to the company's Blaine Hoffman.

BRADY: Hoffmann is a North Dakota native, and he's seen oil booms before. This one started in 2006. The number of drilling rigs in the state has steadily increased to more than 140. Each rig needs a crew and plenty of supplies, which Hoffmann says helps North Dakota's economy.

Mr. HOFFMAN: We've been kind of oblivious to what's been going on out there. Unfortunately, there's a lot of hardship in other states, but we have not seen that. Things have been good here for us.

BRADY: Oil was first discovered in North Dakota's Bakken Formation in 1951. But it's locked away deep underground in shale that doesn't allow the oil to flow freely.

In 2006, crews started using two technologies: extended-reach horizontal drilling and hydraulic fracturing. Now, they can break up that shale underground so oil is more easily released.

Ron Ness is president of the North Dakota Petroleum Council.

BRADY: But Ness says even with the newer technologies, more than 90 percent of the oil in the ground is left behind in the Bakken Formation.

Mr. NESS: This Bakken is so tight, it's like a tombstone or the cement in your driveway, and as the great minds of the future continue to look at technologies, we think we'll get more and more of that oil out of the ground.

BRADY: But some of the oil industry's technologies are controversial. Hydraulic fracturing has come under increasing scrutiny, especially in the more populous Northeastern U.S., where it's used to drill for natural gas.

Many there worry the thousands of gallons of chemicals used for each job could be polluting groundwater. Environmentalists and other critics have similar concerns about using hydraulic fracturing for oil production.

Around Stanley though, residents are more focused on the economic benefits hydraulic fracturing has brought them.

BRADY: There's plenty of new construction and some, like Betty Harstad(ph), now get royalty payments. She has one well on her farm outside town.

Ms. BETTY HARSTAD: So for farmers it was a nice gift because farming isn't all that economical. There's, you know, a lot of stress with it. So it relieved the stress of some of the farmers in the area that were able to receive royalties.

BRADY: The boom also has attracted more residents to this once-sleepy town. Christie Moore's(ph) husband is a crane operator and they've been following oil and gas booms in Wyoming and now here.

Ms. CHRISTIE MOORE: Moving four times in three years is hectic, but it's better than sitting home crying because you ain't go no money.

BRADY: Lack of money isn't a problem for North Dakota. While other states grapple with tough budget decisions, the state government here likely will have more than a $700 million surplus next year. And that's with a tax decrease and increased spending. 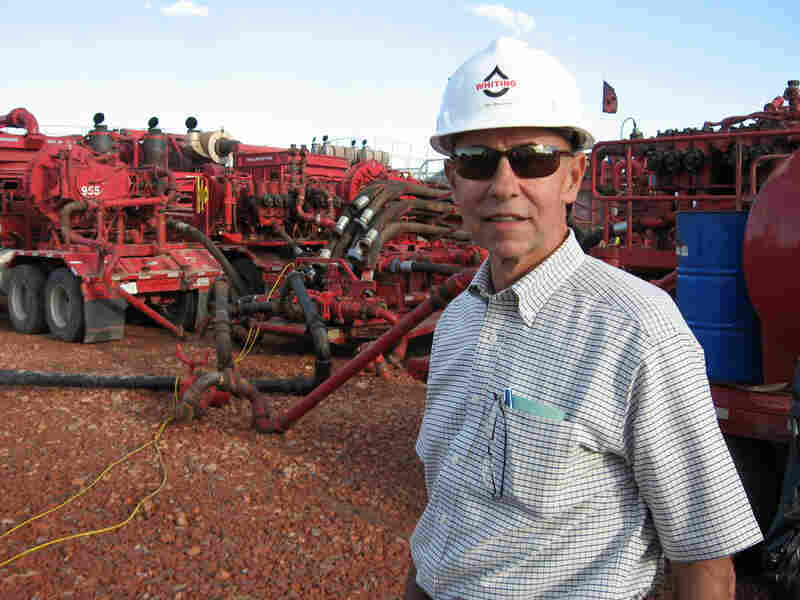 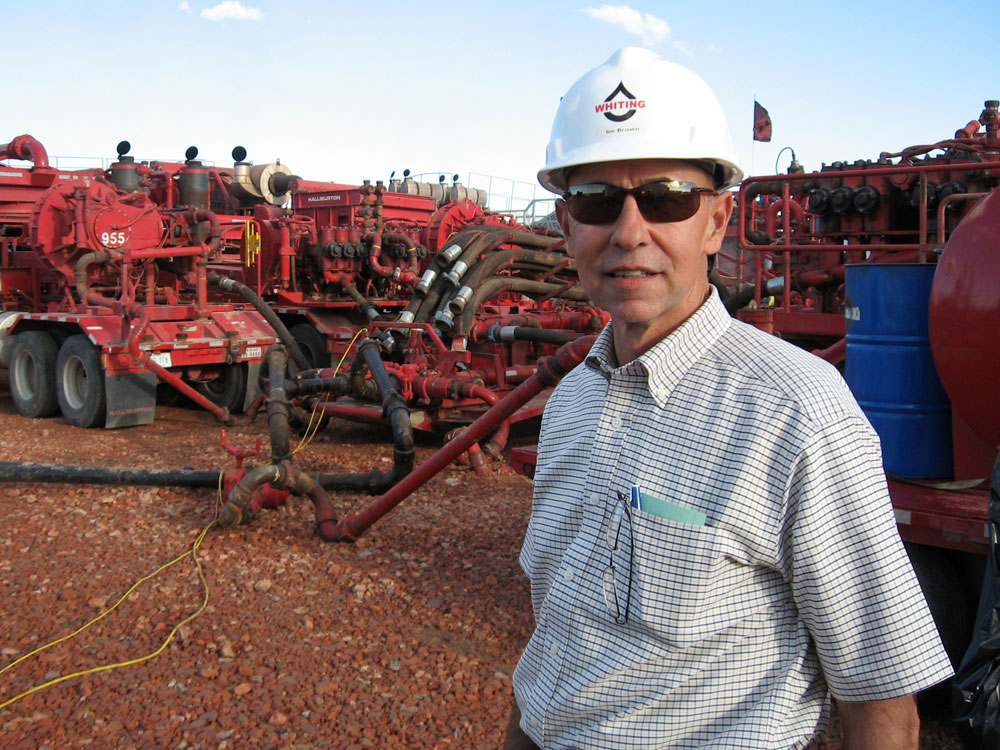 Jim Brown, senior vice president of Whiting Petroleum. Fourteen of the company's Denver-based rigs have drilled over 100 wells in the Bakken Formation, which covers a huge area in North Dakota, Montana and Saskatchewan.

Every day the United States goes through another 20 million barrels of oil. Finding enough crude to supply the country's oil habit is difficult because much of the oil that's easy to get to is gone. Now companies are extracting oil in places that are expensive to drill and raise concerns about safety and the environment. BP's disastrous oil spill in the Gulf of Mexico is the most obvious example.

Out on the rolling prairies of North Dakota -- and just about everywhere else -- oil doesn't bubble up out of the ground anymore. You have to go in and force it out.

Jim Brown knows the difficulties of modern-day drilling; he's senior vice president of Denver-based Whiting Petroleum. His company plans to drill more than 383 wells as part of the surge in oil drilling in western North Dakota.

The crude is locked away in a layer of sediment 2 miles underground. Not only did his crew drill down that far; they took a sharp turn and drilled another 2 miles horizontally through the sediment. Now they'll use a controversial process called hydraulic fracturing to create a series of small cracks underground to free the oil.

"This total job, we'll pump about 40,000 barrels of fluid and about 4 million pounds of sand in this well," Brown says, standing near his company’s Hagey 12-13H well outside Stanley, N.D.

Brown says fracturing the sediment will boost oil production about tenfold for the first month the well is operating.

"I've been in this business for over 35 years and we are doing something here today that we did not have the technology to do seven years ago," he says.

Hydraulic fracturing -- or frac'ing -- also is used for natural gas, and it's controversial. The fluid is mostly water, but it also contains about one-half percent chemicals. Despite industry assurances, environmental groups worry frac'ing is polluting groundwater, and they want more regulation. Some even want an outright ban. But without this technology, the boom in North Dakota wouldn't be happening.

Tyler Priest, clinical assistant professor and director of global studies at the University of Houston

New technology has changed oil drilling in the Gulf of Mexico too. As seen in the wake of BP's blown-out well in the Gulf, companies have sophisticated technology like remote-controlled submarines. That means they can explore for oil in places humans can't even go. Sometimes the projects resemble a space mission.

"The space program and the offshore industry have long shared technologies and learned from each other," says Tyler Priest, clinical assistant professor and director of global studies at the University of Houston.

In 1996 NASA launched a probe to Mars, and that same year Shell launched a drilling platform in 3,000 feet of water in the Gulf of Mexico. "The difference being that Shell's platform cost more than three times as much as NASA's Mars Pathfinder, and arguably involved more sophisticated technology and more sophisticated remote engineering," Priest says.

Now companies are drilling in 10,000 feet of water. The cost creates a new floor for the price of oil -- meaning don't expect $2-per-gallon gasoline to return anytime soon.

Still, the technology that makes this possible is impressive, but the developments are weighted heavily to the production side of the business. 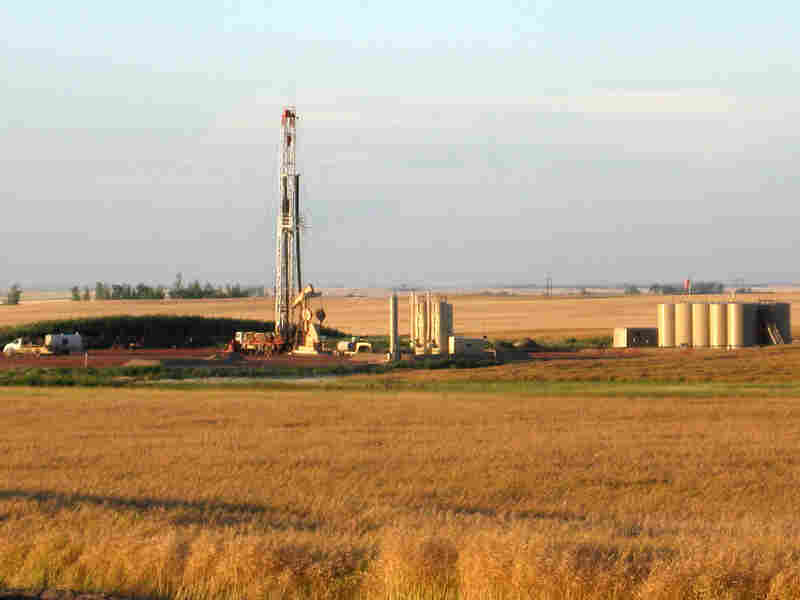 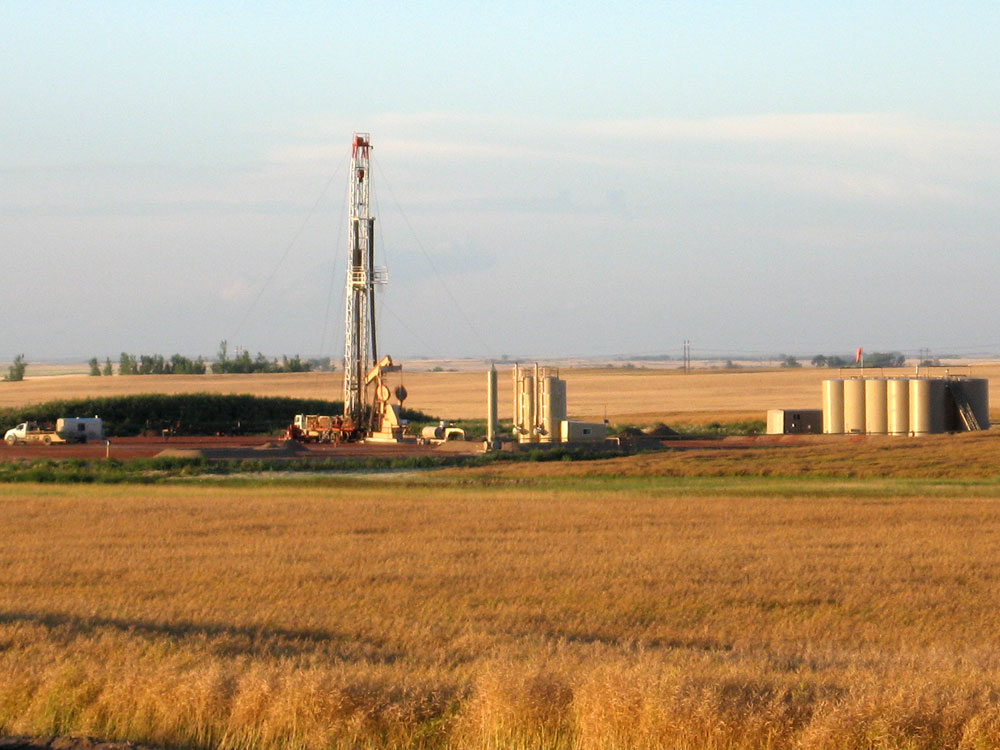 An oil drilling rig stands amid a farmer's field near Stanley, N.D.

"The concern we have is that the technology to contain and then clean up a spill has not kept pace with the increased technology to drill for oil," says Sarah Chasis, senior attorney and director of the National Resources Defense Council’s Ocean Initiative. Chasis says the federal government needs to figure out the best way to respond to a low-probability, high-cost event like the Gulf spill.

Former Shell Oil President John Hofmeister prefers to focus on the low-probability side of that equation -- and he thinks companies should brag more about their history. "The fact that you can count on one hand the kind of blowouts that have occurred in the face of these tens of thousands of wells is a pretty remarkable testimony to the safety and the risk management that the companies provide," Hofmeister says.

Hofmeister has started a nonprofit group to prompt more discussion about energy policy and the oil industry. He says it's time the public had a better understanding of what it takes to provide those 20 million barrels of oil Americans use every day.