Accessibility links
Housing Market Woes Bring Familial Strife A bleak housing market makes people fret about more than their wallets: Families also suffer the consequences. One couple broke off their engagement, but the current value of their home has kept them living together. Another family has been separated by 900 miles for 18 months because the father left for work and their house isn't selling. 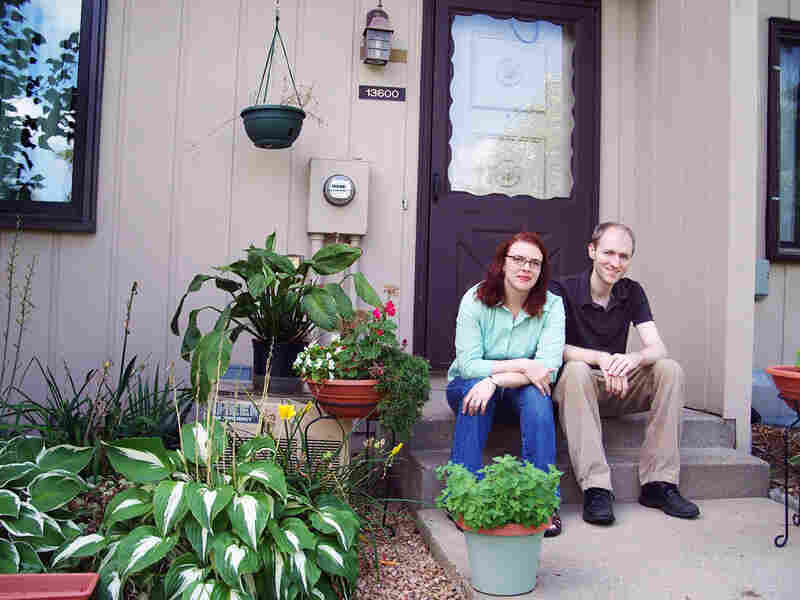 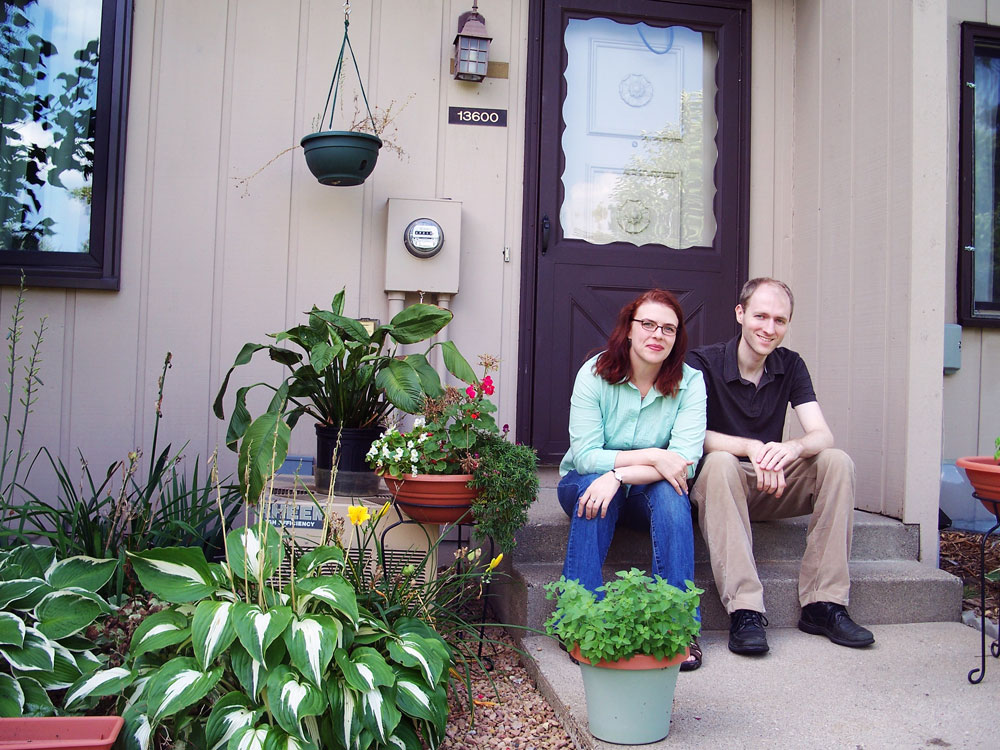 Kelly Christensen and her ex-fiance, Joel Nerenberg, sit outside their home in Burnsville, Minn. Despite their broken engagement, the two are living together because they can't afford to sell their house for what it's worth now.

Until recently, homeownership was celebrated as a hallmark of upward social mobility. Today, many millions of people who owe more than their homes are worth feel it's become quite the opposite. It prevents many people from being able to seek a better job. And in many cases, it's taking a harsh emotional toll on families who find themselves stuck.

Among those frozen in place is Kelly Christensen, who was set to marry her longtime love, Joel Nerenberg. They bought a house in Burnsville, Minn., three years ago. They had wedding invitations printed. Then they broke up.

Two years later, they still own their home. Christensen's wedding dress now hangs in her ex-fiance's closet. He lives across the hall.

"Every time I'd come home, it was heartbreak," Christensen says. It was both awkward and painful to mourn the loss of a shared future, yet still share a joint fate because they could not afford to sell their home, which still continues to lose value.

Tell Us Your Story

Is your inability to sell your home affecting your life? Tell us about your experience.

Buyers are demanding too much without putting into consideration ... the situation of the seller — Rebecca Lee Varaday
Austin, Texas

Christensen and Nerenberg have made peace -- with themselves, and with each other. Today, the two are still connected in all ways except marriage. They share a bank account for the house. They fix things together. They serve as each others' emergency contact. They're friends -- and they even try to encourage the other's dating life, such as it is.

"In the process of seeing someone new, when do you bring this up?" Nerenberg says.

"Is this a first-date deal breaker? Or do you wait until your third date and bring that up nonchalantly?" Christensen asks, by way of answer. Neither has had serious relationships since breaking up.

Christensen and Nerenberg weren't always sanguine about their continuing co-habitation. Once, Christensen moved to a friend's house for two weeks -- only to realize she couldn't afford her half of the mortgage and rent. Another time, Nerenberg packed up his car, planning to seek better jobs in California. He later unpacked, not wanting to leave Christensen alone to deal with the house.

And the issue of the house haunts them daily.

"Sometimes I see pictures of when we lived in an apartment together. And I think, 'Oh, if we still lived there, I could just drive away,' " Nerenberg says. "Right. Now."

Several states away, Stephanie Blair is also stuck in her home, but with very different consequences.

Blair lives in Montrose, Colo. A year-and-a-half ago, her husband lost his construction-related job and moved 900 miles away to take a job in Texas. She stayed behind with their two children to try to sell their home.

"We find that 18 months later, we still have a house to sell," Blair says. "He's been living in an RV in Texas, hoping that someday we'll be able to join him. Our realtors recently told us that there's just no way that our house is going to sell, and we're stuck."

The real estate agent told Blair the only hope would be to slash the $400,000 home price in half -- a huge loss they can't afford to take. Blair is considering renting it, though that might only cover half of the mortgage.

She's also discovered that the house trap has all sorts of other hidden costs: Plane tickets are expensive; so is maintaining two separate homes. And Blair had to give up her part-time work because her husband wasn't around to look after the kids.

"Families are used to helping each other out, and we're just not able to do that from 900 miles away," she says.

Kristina Glad Peterson wants to sell her Riverside, Calif., home. Her husband wants a better job. And they both want to start a family, but not until they can live closer to their Midwestern families. All of that is off the table because their current house has lost $40,000 in value.

"I constantly think about it," Peterson says. "I was just looking at the numbers this weekend, and I have to tell myself, if we can just hunker down for three to five years, which sounds like an incredibly long period of time, hopefully the amount that we owe on our house will go lower, and the value of the house will grow higher, and we can break close to even and move on out of here."

But Peterson knows she's not alone. All around her, houses are for rent and for sale. And there are few takers.