Accessibility links
Glenn Beck Comes To D.C., Controversy Follows The conservative radio show host and Fox News Channel personality says the scheduling and Lincoln Memorial location of his "Restoring Honor" rally on Saturday, the anniversary of Martin Luther King Jr.'s seminal 1963 "I Have a Dream" speech, was a divine coincidence. Critics doubt that.

Tens of thousands of Glenn Beck fans and Tea Party supporters are expected to descend on the National Mall in Washington, D.C., Saturday for an event the conservative talk show host has promoted as a celebration of America's "heroes and heritage." 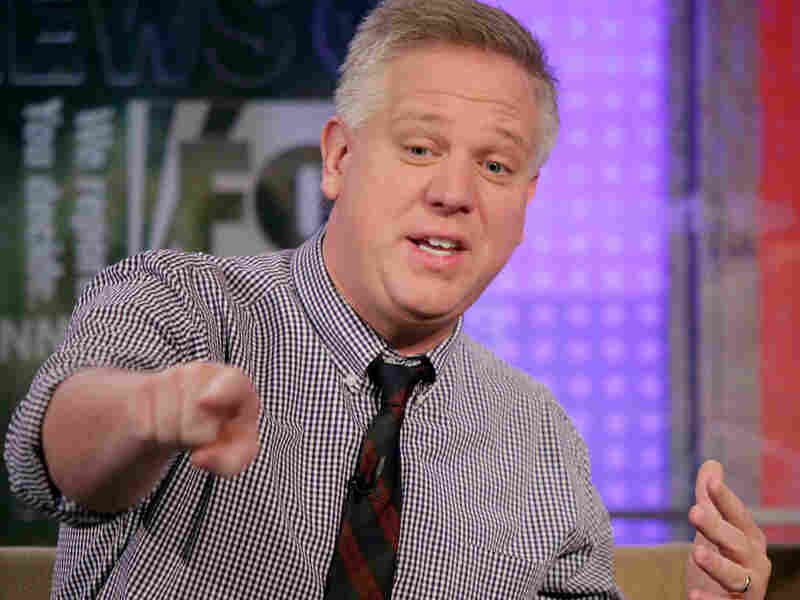 Beck, on the set of Fox & Friends in May. Richard Drew/AP hide caption 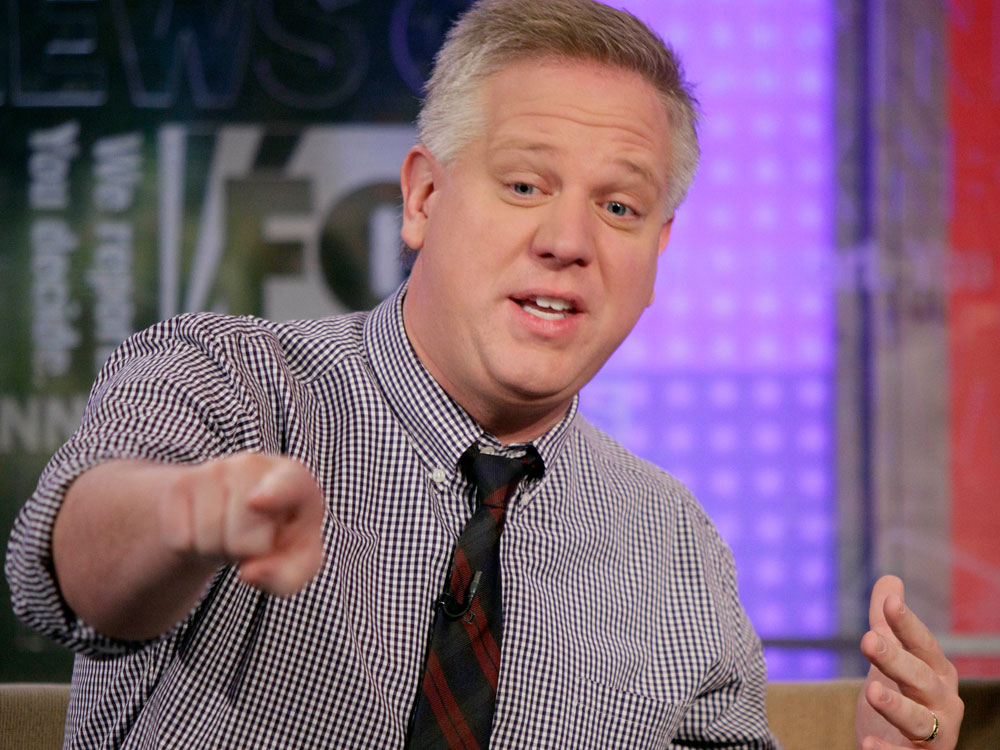 Beck, on the set of Fox & Friends in May.

But as is usually the case with the histrionic Fox News Channel host and national radio personality, his actions have not come without controversy.

A countermarch is being planned at a different location in Washington to protest Beck's decision to schedule his event on the same site and on the 47th anniversary of civil rights hero Martin Luther King Jr.'s seminal "I Have a Dream" speech.

And the timing of Beck's rally, which includes a planned appearance by 2008 Republican vice presidential nominee Sarah Palin, is also being criticized by some Tea Party leaders concerned it will depress attendance at their planned Sept. 12 organization-building rallies in Washington; St. Louis; and Sacramento, Calif.

"I hope they have a wonderful time, but I just don't get why he's having this and why now," says Andrew Ian Dodge, Maine coordinator for the Tea Party Patriots, who has dubbed Saturday's event "Beckapalooza." 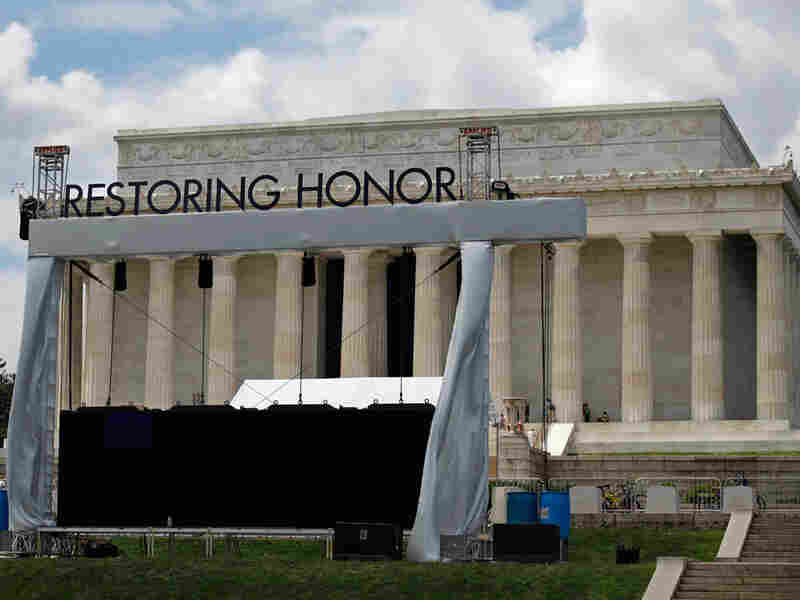 The rally's theme: "Restoring Honor." The stage has been set in front of the Lincoln Memorial. Alex Brandon/AP hide caption 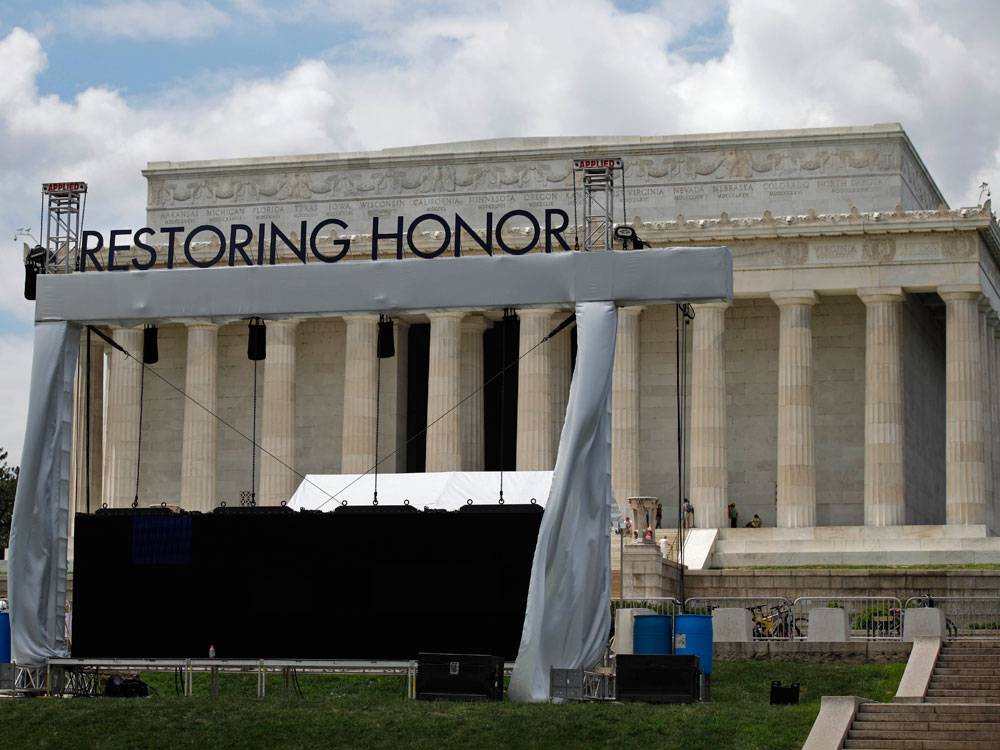 The rally's theme: "Restoring Honor." The stage has been set in front of the Lincoln Memorial.

"Is this just to increase Brand Beck?" he asks.

Just what Beck may have to say about all of that Saturday at an event he says is "nonpolitical" and not affiliated with the Tea Party movement, is anyone's guess.

But odds are good he will address criticism over the timing of his event. 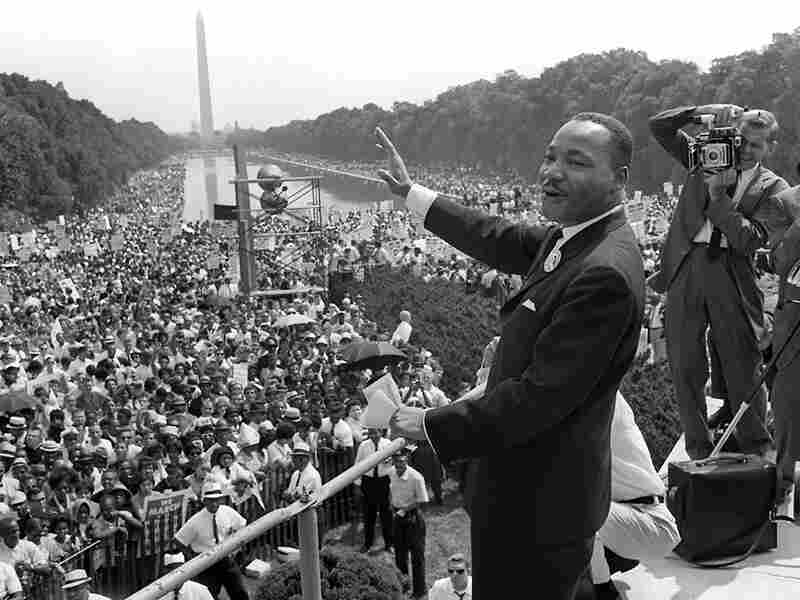 Martin Luther King Jr., Aug. 28, 1963 — the day he delivered his "I Have a Dream" speech at the Lincoln Memorial. AFP/Getty Images hide caption 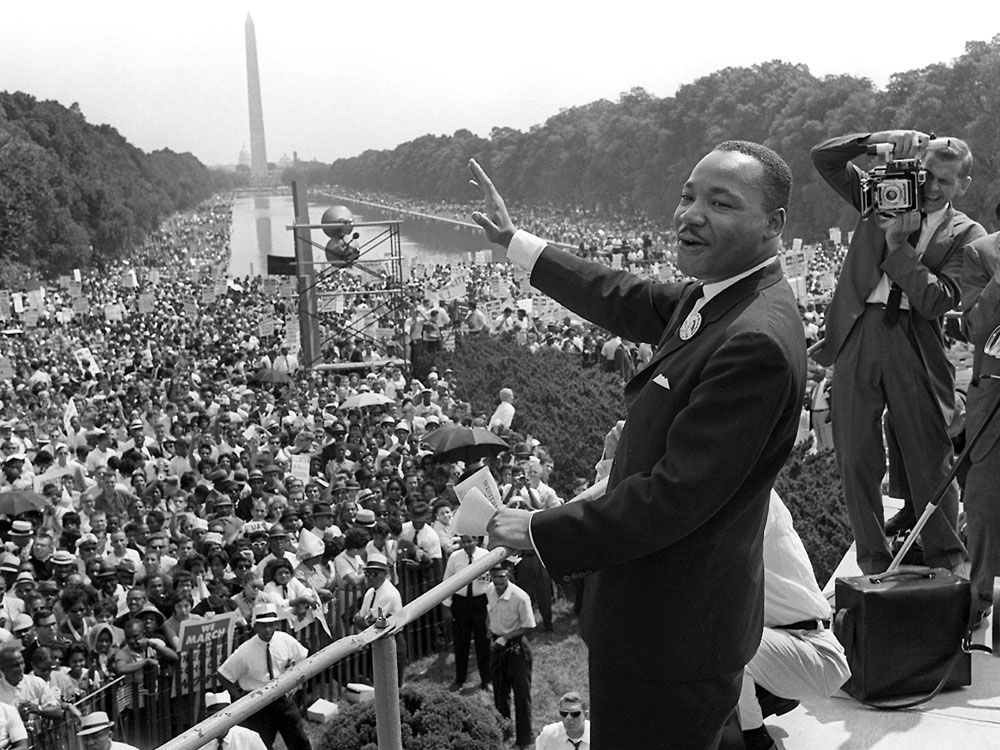 Beck has repeatedly said that he was dumbstruck when he realized that he had requested his rally permit for the anniversary of King's 1963 speech during the March on Washington for Jobs and Freedom.

It must have been "divine providence" that he unwittingly settled on that day, he told his radio audience. He later said he was out to "reclaim" the civil rights movement.

Baloney, says Alexander Zaitchik, author of the recent book Common Nonsense: Glenn Beck and the Triumph of Ignorance, who acknowledges that he takes a cynical view of the talk show host's motivations.

Zaitchik recalls listening to Beck last November talk about the difficulty in securing a permit for the Aug. 28 date because of its historic significance.

"He only later claimed it was divine providence," Zaitchik says. "He has certainly tried to jump on the 'coincidence' and claim the civil rights legacy for himself."

For those who have watched or, like Zaitchik, researched, Beck's career, the civil rights mantle doesn't settle easily.

"This is the guy who has a whole history, going back in Top 40 radio, of using racist jokes, racist humor, making fun of police brutality, and with a very deep hatred for black social justice activists," Zaitchik says. Beck stood by his claim that Obama is a "racist" and has frequently referred to the president's initiatives -- including health care -- as "reparations." 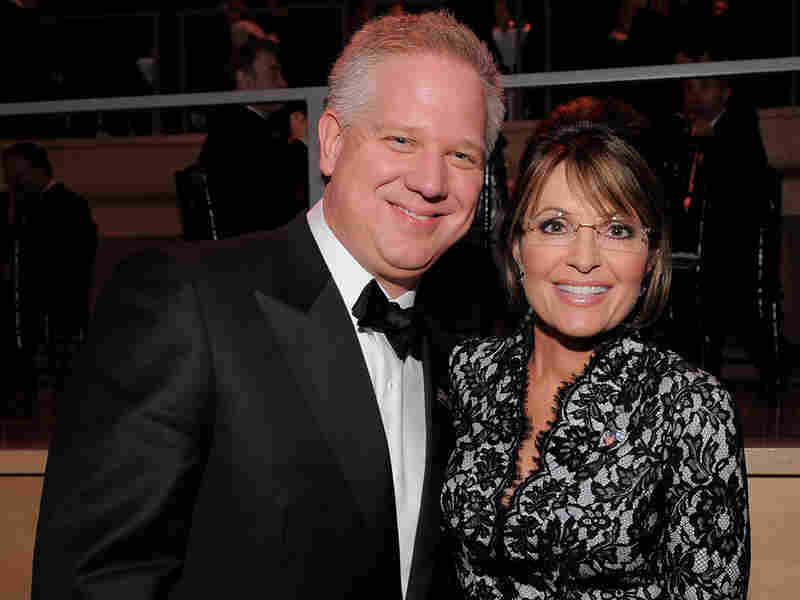 Beck and Sarah Palin were on Time magazine's 2010 list of the world's 100 most influential people. She's expected to speak at Saturday's rally. Jemal Countess/Getty Images for Time Inc. hide caption 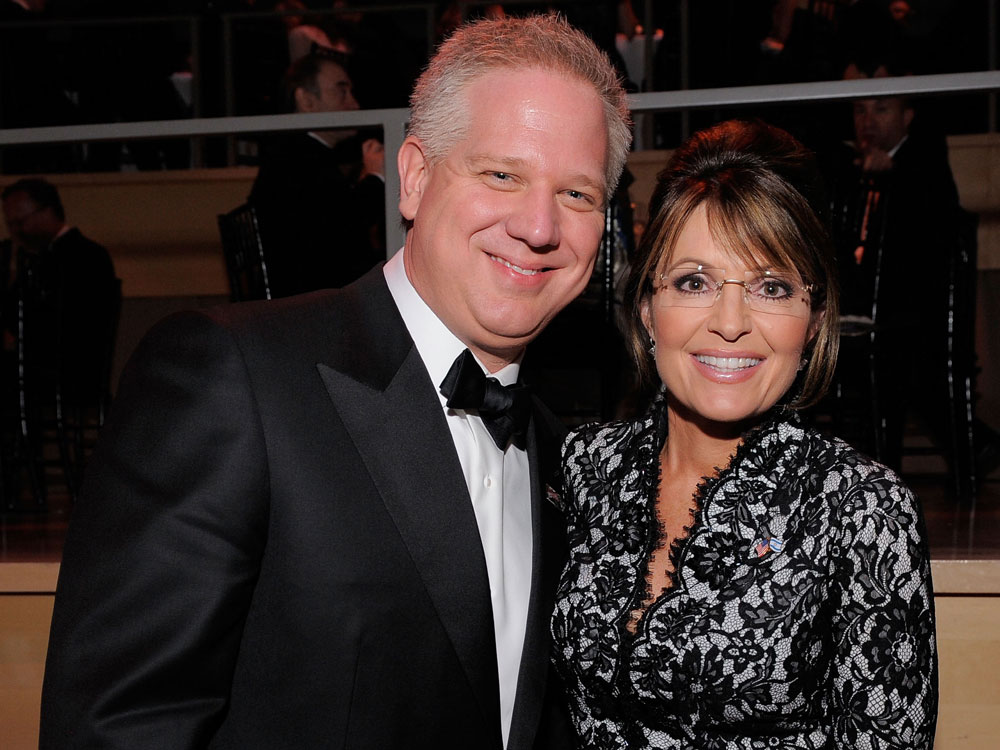 Beck and Sarah Palin were on Time magazine's 2010 list of the world's 100 most influential people. She's expected to speak at Saturday's rally.

Though National Tea Party Federation co-founder Mark Skoda says he sees no problem with the timing of the rally -- "some are just trying to connote that Martin Luther King owned that date," he argues -- other Tea Party supporters such as Dodge say the timing is unnecessarily provocative.

Civil rights leaders like D.C. City Councilman Harry "Tommy" Thomas Jr. have organized the "Reclaim the Dream" countermarch in a bid to blunt the symbolism of Beck’s Lincoln Memorial event. "We can't allow another group to skillfully use that day, and use the greatest orator and his speech, to promote their political ideals," Thomas says.

"This has been purposefully done -- it is hypocrisy at its highest degree," he argues, calling it "just another tactic of divisive behavior to keep people apart."

On a recent program, Beck said that the countermarch organizers, including the Rev. Al Sharpton, "have no idea what's going to be said or done onstage and they’re protesting it already."

Zaitchik says he doesn't view Saturday's event as primarily to honor heroes, military and otherwise, but as the fulfillment of Beck's long-held dream of holding an event on the National Mall.

In 2003, Beck held gatherings he called "Rally for America" around the country with the stated purpose of honoring troops, but he didn't have a gathering on the Mall. During last year's so-called 9/12 Tea Party rally, inspired by Beck's "9-12 Project" (a compilation of the host's post-Sept. 11 "principles and values") he was prevented by Fox from joining the gathering on the Mall.

"Now he’s finally getting his moment on the National Mall," Zaitchik says. "I view this through a prism of his business -- he's in a very competitive media world with many distractions and this will enable him to be the topic of conversation."

There are obviously alternative views, like those held by the National Tea Party Federation's Skoda.

The rally is a reflection, Skoda says, of Beck's commitment to activism and his role in "being a champion for getting back to what our founders understood."

"He’s really been talking about praying for the nations and about getting back to what our Founding Fathers knew -- that our rights are God-given, from our creator," Skoda adds.

Glenn Beck on why he's holding his Restoring Honor rally Saturday in Washington. (Video above.)

"Hi. I’m Glenn Beck. You might know me as the guy on television, or radio ... or the author.

"I want to speak to you just as a fellow American that is concerned about the direction of our country. And this has nothing to do with politics. This has everything to do with ... who are we?

"We’re not the people that we’ve allowed ourselves to become.

"People say all the time as they're trying to fix Washington — we need a George Washington, or we need a Thomas Jefferson, or a Ben Franklin.

"I haven’t seen them. But then I realized, it’s because we haven’t grown them in an awfully long time.

"I have a 5-year-old son. His name is Rafe. We were reading one night before he went to bed. And I said to him: 'Boy, that guy was a real hero, wasn’t he?'

"My son looked at me, just totally puzzled; he said, 'No.'

"Join me in Washington on Aug. 28 as I bring you some examples of people living today that are doing remarkable things that your children need to see, that you need to see. You need to see people who have flaws but are working hard every day to conquer them.

"You can look down at your child and say something that I’ve never said to mine — I don’t want my child to be president of the United States because I don’t even know what that means anymore.

And though Skoda is quick to say that Beck’s rally isn’t a religious gathering, the talk show host has added a Friday night event, America's Divine Destiny, in space rented at the Kennedy Center.

Beck says he's been "reaching out to the biggest names in faith for the last year."

"[I] have asked them to help me put differences aside and to reach out with one another, so," Beck says, paraphrasing from The Navy Hymn, "we can remind people to get down on their knees for our brethren's shield in our danger's hour."

The rally comes at a time when Beck, a Mormon, has been taking a more religious tone in his on-air commentary.

Friday's Divine Destiny event, he says, will provide an "inspiring look at the role faith played in the founding of America and the role it will play again in its destiny." In announcing the event, Beck invoked the emergence of a "modern day Black Robe Regiment."

That reference harks back to the American Revolution, when the phrase "black regiment" was used by the British to refer to "dissenting clergy" -- heirs of the old Puritans, not the Church of England -- who supported the Revolution from the pulpit, according to Jon Butler, a professor of American studies, history and religious studies at Yale University.

Though historians continue to argue over the importance of clergy in the American Revolution, Butler says that invoking them now is an "ironic twist on the general Tea Party emphasis." Why? The Puritan churches in America were supported by tax monies, he says, in contrast to Britain, where they still dissented from the Church of England.

But some of Beck's rhetoric has begun to rankle some of his conservative Christian fans.

In a column this week posted on the conservative RenewAmerica website, Marsha West counted herself as a Beck supporter, saying that he "sheds light on what's going on under our noses in the White House and in the hallowed halls of Congress." But she wrote that she's uncomfortable that "Glenn's passing himself off as a Christian." Added West, in a comment sure to offend some: "Mormon beliefs do not line up with Scripture yet they insist on calling themselves Christian when they clearly are not."

It may fuel a new fault line that Zaitchik says he sees developing in the Tea Party between hard-core fiscal conservatives and conservative Christians who have also been attracted to the movement.

Fault line or no, the man who will ascend to the steps of the Lincoln Memorial, a force in the Tea Party movement and a major national political celebrity, is not to be underestimated -- even, says Zaitchik, if it’s significant that more conservatives, including evangelicals, "are calling bulls- - - on him."

"A lot of people have bet against Beck and lost," Zaitchik says. "He has built an empire, and one more complicated than just counting his sponsors on Fox."