Accessibility links
Trapped Miners To Take A Role In Their Own Rescue Thirty-three miners trapped for three weeks inside a mine in northern Chile were told Thursday it could take weeks to free them. To keep them healthy and sane in the meantime, activities are planned -- and they will soon get a chance to help drill themselves out. 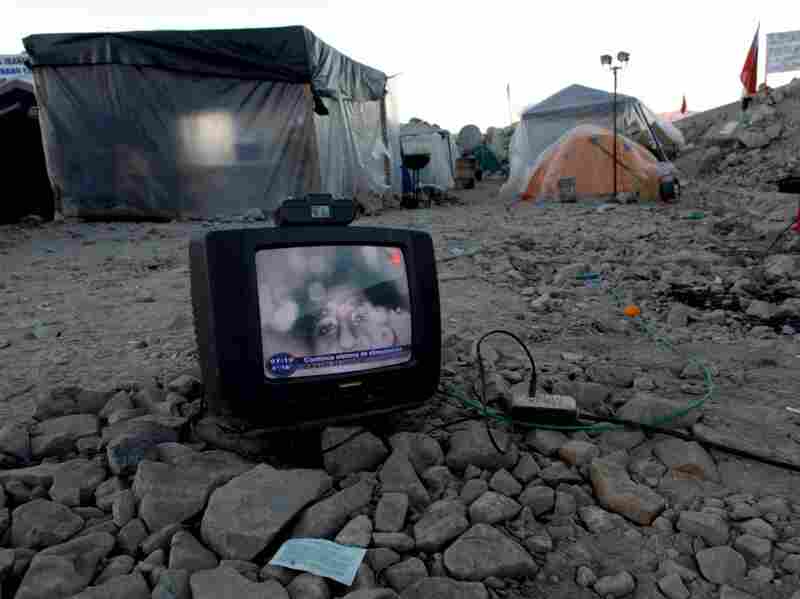 Florencio Avalos, one of the 33 trapped miners, is seen on a TV set near the collapsed San Jose Mine in Copiapo, Chile, on Thursday. Natacha Pisarenko/AP hide caption 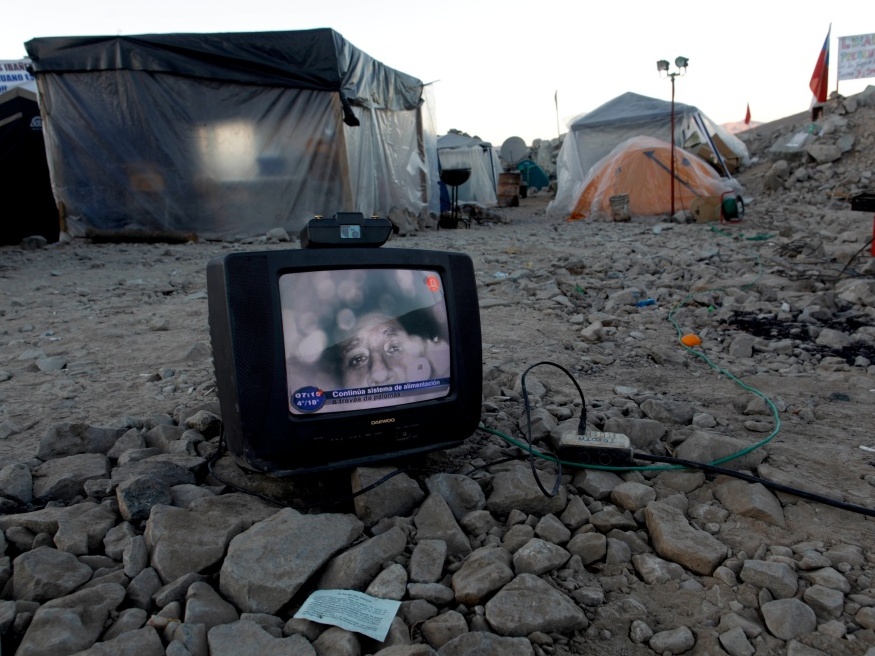 Florencio Avalos, one of the 33 trapped miners, is seen on a TV set near the collapsed San Jose Mine in Copiapo, Chile, on Thursday.

Thirty-three miners trapped for three weeks inside a mine in northern Chile were told Thursday that it could take weeks to rescue them. Now the challenge is not just how to get them out, but how to keep them healthy and sane in the meantime.

Long, thin packets of food, medicine and letters are going down to the miners through a narrow passage in the San Jose Mine, which was built without an adequate emergency exit. The packets are nicknamed "doves," though they look like giant, 5-foot-long pencils. Soon the miners will also get walkie-talkies. But the men have lots of time on their hands, and it's important that they stay active to avoid getting sick or depressed.

"They have approximately 2.5 kilometers of tunnels free of debris, which gives them a place to exercise in," says Miguel Fort, a government engineer helping with the rescue effort. "And they're already divided into three work groups to take care of things like clean-up and organization, water and improving ventilation."

In fact, Hugo Olmos, a professor in the mining department at the University of Atacama who has been participating in the design of a rescue plan, says the miners will actually be helping dig themselves out.

"With a drill, we'll first get down to the miners," he says, "and then they will have an important task, because we'll be sending down another drill in pieces, which is for drilling upward. They will have to put it together and operate it."

It's going to be a complex, difficult process. The machine might break, and the miners will have to learn to build and run equipment they're unfamiliar with. But they'll have tools and instructions sent down, too. Olmos says he believes it will help the miners psychologically to know that they're working to get themselves out.

He says the rescue could take far less than four months if the government opts to simultaneously undertake a second, more risky plan.

"In 10 days, it will have been a month since the accident, and the earth should have stabilized itself," Olmos says. "We could potentially keep an eye on its geothermic activity and go into the mine again to see if we can connect with the people inside." 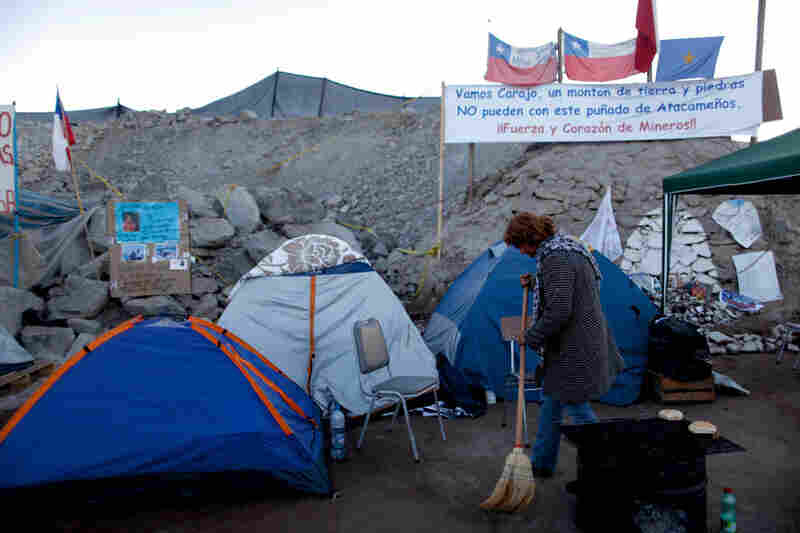 Lilian Ramirez, wife of miner Mario Gomez, sweeps outside the tent she set up near the collapsed mine. Natacha Pisarenko/AP hide caption

Olmos basically is suggesting treating the mine like a sleeping animal, monitoring its vitals for signs of movement, while rescuers carefully venture in the old mine shaft to see if they can get to the trapped miners.

Lilian Ramirez doesn't know about this alternative plan yet, but even so, she believes her husband will be rescued much sooner than the government has projected. Ramirez thinks her husband might get out before Sept. 18, Chilean Independence Day.

Whether it's three weeks or three months before rescue workers reach the miners, Ramirez plans on staying at the site, living out of a tent and washing outdoors until she's reunited with her husband.

"I'm staying here. This is where I feel closest to my husband and the other miners," she says.