Accessibility links
Some Katrina Evacuees Long For What They Lost When the thousands of people fled New Orleans after the storm, they scattered all over the country, with Houston receiving the biggest influx of evacuees. For some families the transition to a new city was easy though bittersweet. Still, others struggled to plant roots. 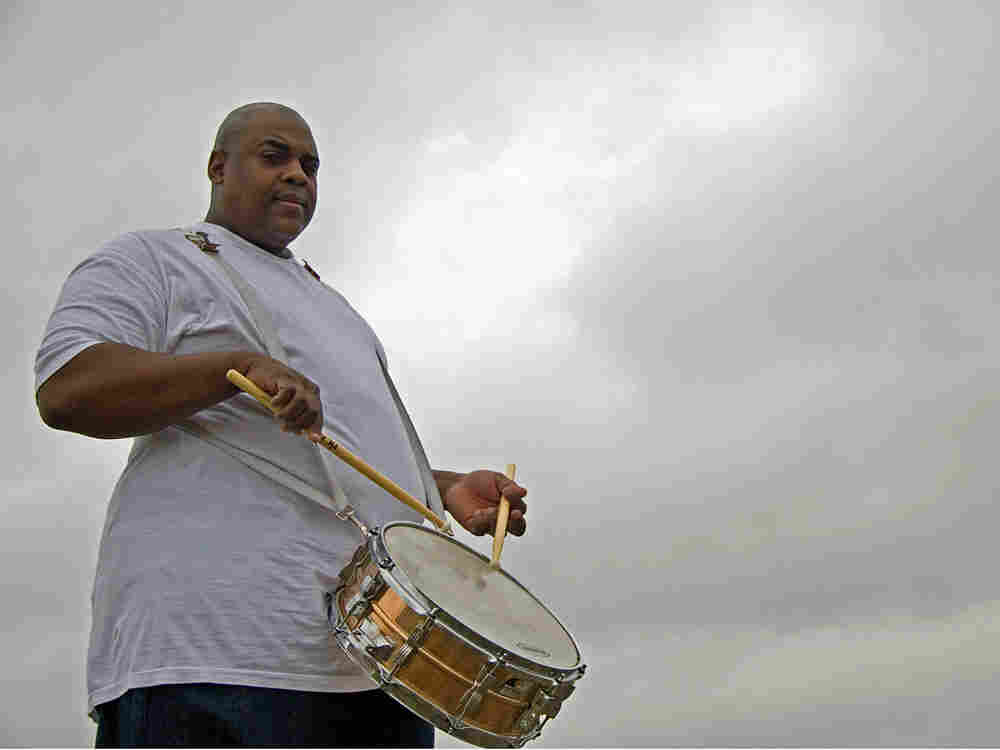 Lumar C. LeBlanc was photographed for the Surviving Katrina and Rita in Houston project installation, "Who We Are." LeBlanc was interviewed by Dallas McNamara, a fellow Katrina evacuee, on Jan. 21, 2007. Dallas McNamara hide caption 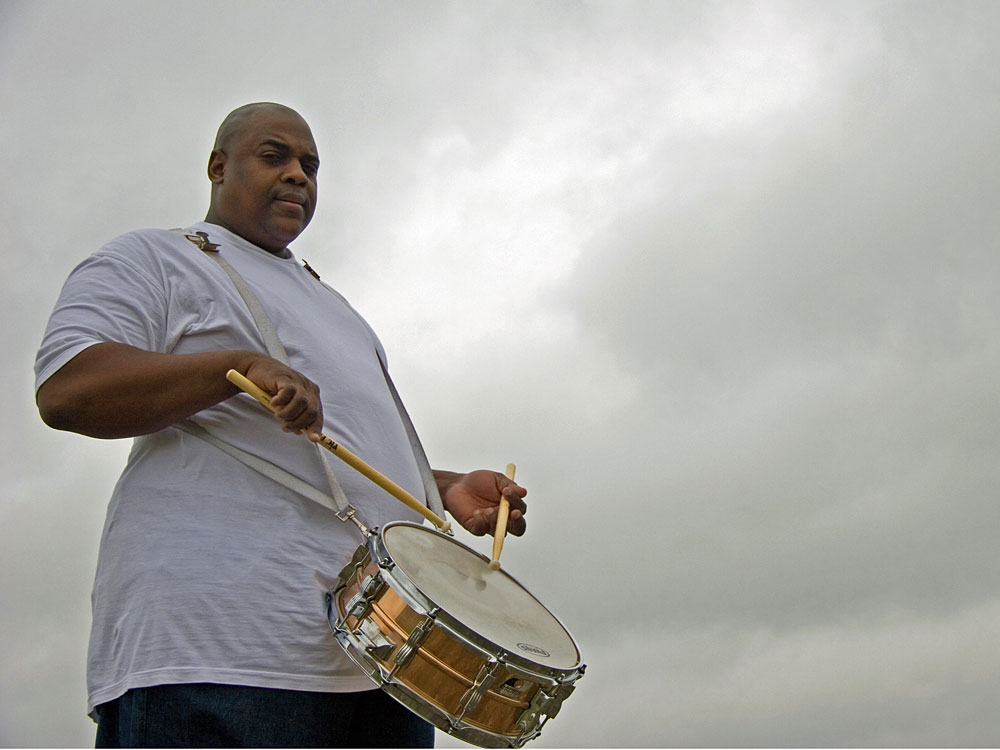 Lumar C. LeBlanc was photographed for the Surviving Katrina and Rita in Houston project installation, "Who We Are." LeBlanc was interviewed by Dallas McNamara, a fellow Katrina evacuee, on Jan. 21, 2007.

Five years ago Hurricane Katrina made landfall, setting in motion an epic disaster and sending thousands of people fleeing.

Houston -- 350 miles east of New Orleans -- was a refuge for many people. The Astrodome became a massive shelter and thousands of families opened their homes, to friends and strangers alike.

Many New Orleanians have stayed in Houston, while remaining firmly attached to the city they left.

For snare drummer and band leader Lumar Christopher LeBlanc III, life was sweet before the storm.

"Oh man, it was a paradise for me especially," LeBlanc says. "Five years ago, prior to Katrina? Oh, I was playing music, taking care of my kids and my wife ... eating good food, enjoying good music, seeing good people."

There are few things in the world that can spread smiles, boogieness and pure unadulterated joy like a seven-piece New Orleans brass band.

But Hurricane Katrina drowned the Soul Rebels' instruments, if not the band members, who fled to Houston with their families.

I just want to find a job, get back in school and start fresh.

The story of the Soul Rebels casts an interesting light on the plight of Katrina evacuees. Before the storm, Lumar LeBlanc and his band lived regular middle-class lives. He had a day job teaching middle school and at night they played New Orleans and toured some around the country. But after Katrina the nation's arts world came running. Those people not only had money; they bought the band new instruments; they had influence and connections.

"After Katrina, we skyrocketed more, the popularity of Soul Rebels, due to exposure," he says. "The Grammy organization, movie stars, Brad Pitt. They kind of found us."

The Soul Rebels became more well known than they'd ever been and began touring across the country. In fact, LeBlanc doesn't have to teach anymore. And his children liked the schools in Houston; they said they didn't want to go back. His wife got her same job in Houston with the same big hospital corporation she'd worked for in New Orleans. Their insurance company paid off the mortgage in the 9th Ward, but there was no money to raise the ruined house off the ground and rebuild it like FEMA demanded; that would have been an additional $150,000.

Then FEMA said it would help the LeBlancs buy a new house in Houston.

"Don't tell me why, but that's what they offered," Lumar LeBlanc says. "So I obliged with that and that's how I bought my home in Houston."

The house in New Orleans? LeBlanc says it's still a mess: "It's boarded up, it's just a shell. It was a brick home so the outside looks fine."

And so like tens of thousands of other former New Orleanians, the LeBlanc family will stay in Houston. Lumar LeBlanc drives back to New Orleans every week, carpooling with another band member who also lives in Houston now. And LeBlanc has started a new band here called The Hustlers.

LeBlanc says it's slow going in Houston. Zydeco's what's popular there, not second-line soul. The Hustlers are trying to change that a little.

But of course, not everyone has had the happy experience the LeBlanc family has enjoyed.

Three years ago, Lorenthia Richardson was living in a three-bedroom apartment with three other women -- all relatives -- and their 14 children. Twelve of them had come, all crammed together, in a Pontiac Grand Am.

At the time Richardson was single, no children of her own, a nursing student. When we met her in 2007 she'd just discovered her cousin and her four young children in a Houston homeless shelter. In the living room, her cousin, Donna Rodriguez, fell into Richardson's arms and wept out two years of misery.

In the ensuing three years, it's been a long hard journey for Richardson and her family. Eventually, the housing money in Houston ran out and they moved to Kansas City to be with other family.

But three months ago Richardson decided to move back to Texas. A Houston organizer who'd watched her struggle and who admired her spunk found money to help Richardson move into an apartment near a nursing school. She was a 25-year-old with a bright future when she left New Orleans that day, her sporty Grand Am crammed full of misery. But that's over with. Richardson says she's come back to Houston to make a life, for herself.

"I just don't want to lay down and say, 'You know what this didn't work so I'm just going to give up.' I don't want to give up. So when Mr. Linwood Johnson called up and said, 'There's hope and I have helped you to regain housing, do you want it?' I accepted, and that's my goal, I just want to find a job, get back in school and start fresh," she says.

"You know they're dying for nurses. And I'm dying to be one."

'It's Not The Same Here'

Twenty-year-old Felicia Lipp was born and raised in New Orleans. She, her brother, mother and father lived in Vista Park, just down the street from the London Avenue Canal, which broke. The neighborhood went under. Felicia remembers what it was like before the levees broke.

"We would sit in the street and all of the neighborhood moms would talk. And we would play kickball out in the street," she says. "And it's not the same here, everybody kind of keeps to themselves." 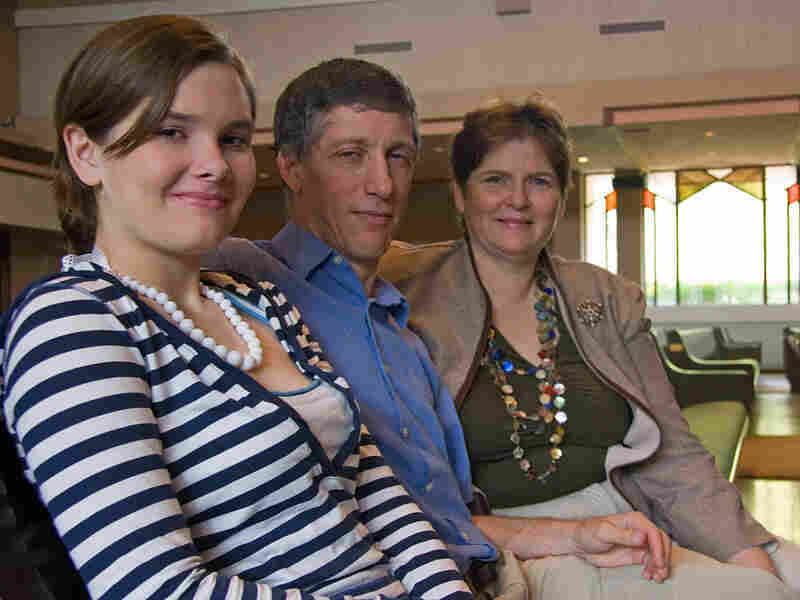 Felicia Lipp (left), her father, Stephen, and her mother, Nancy,were photographed for the Surviving Katrina and Rita in Houston project installation, Who We Are, in early 2007. Dallas McNamara hide caption 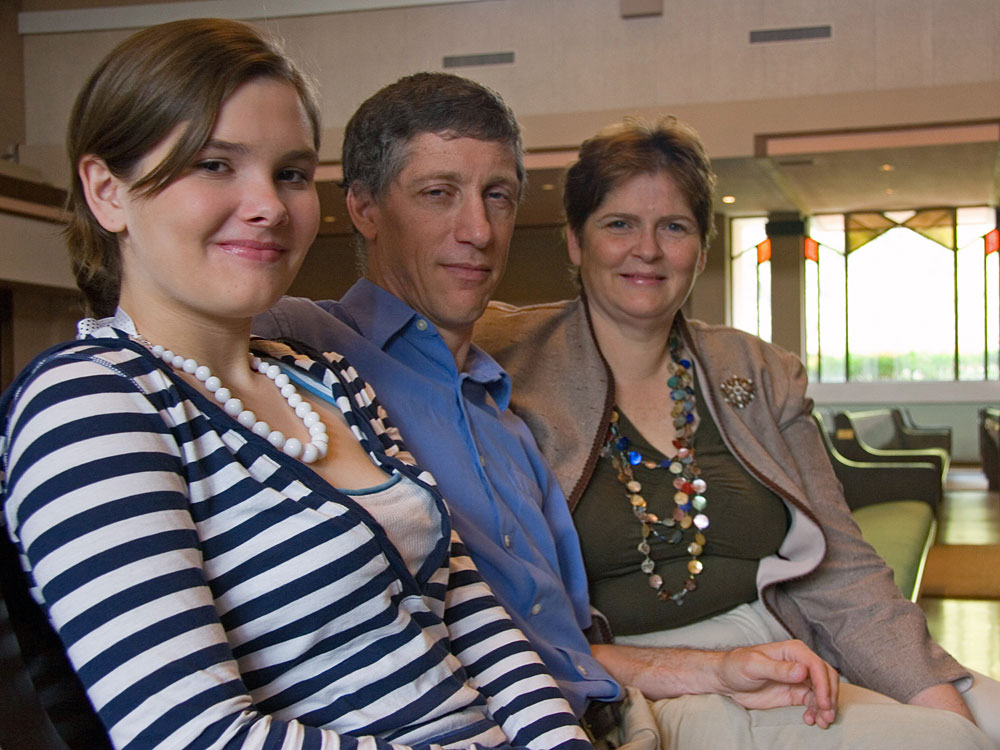 Felicia Lipp (left), her father, Stephen, and her mother, Nancy,were photographed for the Surviving Katrina and Rita in Houston project installation, Who We Are, in early 2007.

The Lipps live in Katy, Texas, a well-known Houston suburb. The Lipp family decided quickly there was no going back. Five weeks after Katrina, with the help of relatives who lived in Katy, they'd bought the house they now live in. For those who are not from New Orleans, it almost impossible to understand the power and allure of what life could be like there. Stephen Lipps was a successful programming engineer in New Orleans; he's an even more successful programming engineer in Houston. But life is different.

"Oh, today's Mardi Gras! And everybody looks at you and says, 'And that means, what?' And you're like, 'No, that means everything!' And they say, 'No that doesn't mean anything.' And that's always been a strange feeling for me," he says.

"You know things couldn't go back to normal, like you felt like something was wrong, you're just kind of stuck and you can't get out of there. And you just have to know the truth, that this is where you have to be and there's no other choice."

But it's not all just loss. Felicia says that when she got to Katy public schools, she was a high school sophomore; she had to work much harder. And that paid off -- now Felicia's a rising sophomore at Texas Women's University, getting a degree in music.

For her mother, Nancy Lipp, who left behind her teaching position at New Orleans University, what's she's found in Texas is meaningful, too.

"Little things. I just told everybody I know that I lost all my cookbooks. If you have any you don't need give to me and I have a whole shelf full of them. And it's sweet, it's sweet. Is this home? I don't know. Yeah. Yes its home, it's home. But I'm being purely pragmatic," she says.

For the evacuees in Houston life goes on, but it will never be the same. The best they can do is now is try bring a little New Orleans to Texas.