Accessibility links
With Salmonella, It's A Chicken-Or-Egg Conundrum Eggs have been getting a bad rap lately as the number of people being made sick by eggs contaminated with salmonella continues to rise. But eggs themselves -- if they come from a healthy bird -- are remarkably resistant to contamination. 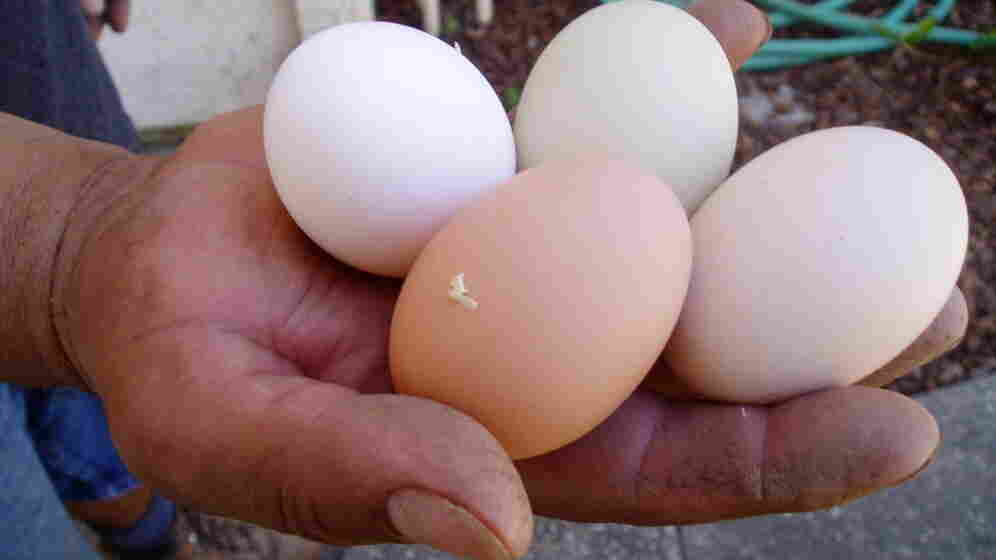 Eggs themselves are remarkably resistant to germs like salmonella. The shell and proteins in the egg white normally do a good job of fending off pathogens. But eggs laid by a bird infected with salmonella will likely be infected, too. Courtesy of John Ingraham hide caption

Eggs have been getting a bad rap lately as the number of people being made sick by eggs contaminated with salmonella continues to rise.  But from an egg's point of view all of this is a bit unfair.   Eggs get contaminated because the hen that's laying them is infected. Eggs themselves -- if they come from a healthy bird -- are remarkably resistant to contamination.

John Ingraham is particularly interested in how eggs stay microbe-free. He is a microbiologist and a chicken owner, and he happens to be my grandfather. He has spent years exploring the world of tiny organisms and so-called "retirement" hasn't changed that.

About a dozen chickens strut and peck in a large chicken coop tucked in between the clothes line and the gleaming pool in Ingraham's back yard in suburban Sacramento. They're quite vocal, and Ingraham points out the distinctive cackle that means one has laid an egg. They sound quite proud of the accomplishment. 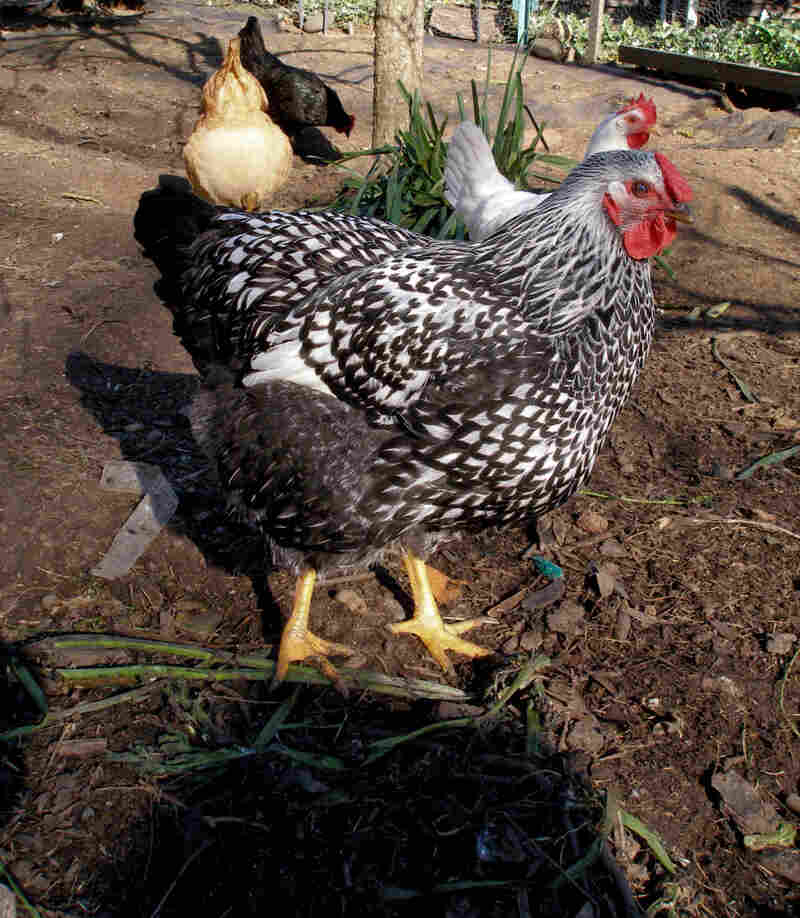 Microbes and the Egg

There are very few places in the world that are naturally germ-free, but eggs from a healthy bird are one of them.  Ingraham says they stay that way because of their chemical defenses. Bacteria may get through a crack in the shell and the membrane underneath, but then the egg white fights back. In the egg white, there are three proteins that are very effective at combating bacteria.

One of these is called lysozyme. It isn't just in egg whites -- it's also in tears, saliva and the drippy stuff that comes out of your nose. In fact, that's how it was discovered by Alexander Fleming (who also discovered penicillin) -- Fleming happened to notice that when drips from his nose fell onto certain bacteria, they died.

It's a pretty neat trick. Lysozyme breaks the wall of the bacteria. And since bacteria are under pressure -- like a balloon -- if you break the wall, they explode. Lysozyme doesn't work on everything, but it can pop a lot of bacteria.

It's a pretty effective system, but Ingraham says that several years ago there was an incident where a certain egg processor suddenly had all of its eggs go bad. "No one could figure out why, and it turned out they were washing their eggs in iron pans," he says. There was just more iron than the conalbumin could mop up, leaving plenty for the microbes.

We've been hearing some egg announcing cackles, so Ingraham reaches into the nest box and pulls out two very fresh eggs. The barnyard smell is unmistakable, and the eggs have a little sawdust stuck to them.  Ingraham says the eggs will stay microbe-free for several weeks, even at room temperature.

But don't we have to keep eggs in the refrigerator, and not eat things with raw eggs in them so we don't get exposed to salmonella?

Ingraham says if the egg comes from healthy chickens, like his, there's no problem. But as the current egg recall shows, chickens are notoriously susceptible to infection with salmonella. And if the chicken that's laying the egg is infected with salmonella, it's likely its eggs will be infected, too. That's why we're told to cook eggs and keep them cold -- cooking kills the bacteria and cool temperatures slows microbial growth and helps the eggs last longer.

"Even a broken egg can last quite a while if it's not cooked, but a cooked egg won't last very long because you've inactivated the proteins," Ingraham says.

"March Of The Microbes," by John Ingraham