Accessibility links
Movie Review - 'My Dog Tulip' - Dog, Mad Englishman Grow Old In A Waning Sun My Dog Tulip is an animated film, but it's no Disney-style heartwarmer about a boy and his canine pal. Instead it's a film for adults -- based on a memoir by a grumpy British writer who lived with an unruly German shepherd for 16 years -- that manages to be touching without getting overly sentimental. (Recommended) 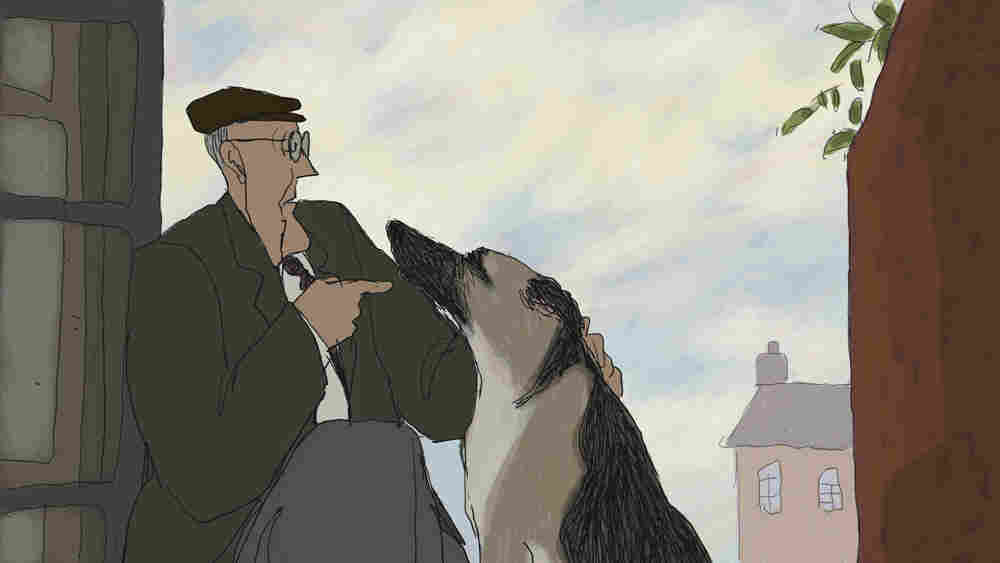 Man's Best Frenemy: J.R. Ackerley, voiced by Christopher Plummer, was a misfit loner who -- after getting fed up with his German shepherd's improper attachment to his trouser leg -- set out to find a species-appropriate mate for his pet. New Yorker Films hide caption

Its comfy title notwithstanding, the prodigious charms of My Dog Tulip are wholly other than those of a Disney-style boy-and-his-dog heartwarmer. For one thing, this goofily animated film is based on a memoir by J.R. Ackerley -- a mid-20th century British writer not known for his warm and fuzzy view of man or beast -- about his 16-year cohabitation, if that's the word for such an enthrallingly co-dependent love affair, with an unruly German shepherd he rescued from the less-than-tender mercies of her previous owner.

For another, a major source of creative inspiration in the movie is poop.

Given that Joe Ackerley was openly gay at a time when it didn't pay to pop one's head out of any closet, the movie's failure to disclose that Tulip's previous owner had also been Ackerley's lover might seem a coy omission. Yet My Dog Tulip is more preoccupied with canine sexuality than with the human variety -- and anyway, both book and film are about Ackerley's search after a lifetime of aborted romances for what he called "an ideal friend." And what a matched pair of misfit loners he and Tulip are -- both abused and neglected in their youth, both uneasy with the niceties of English bourgeois life, and each, in his way, exquisitely attuned to the detritus beneath the veneer of polite society. 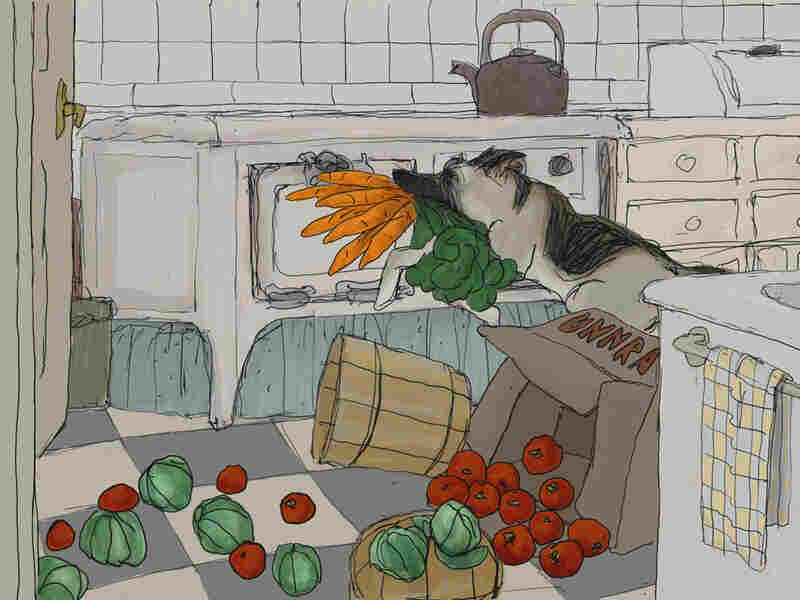 Who Let The Dog Out? Like many onscreen dogs, Tulip is rambunctious -- but her story is a somewhat more mature one than, say, the tale of Marley and Me. New Yorker Films hide caption 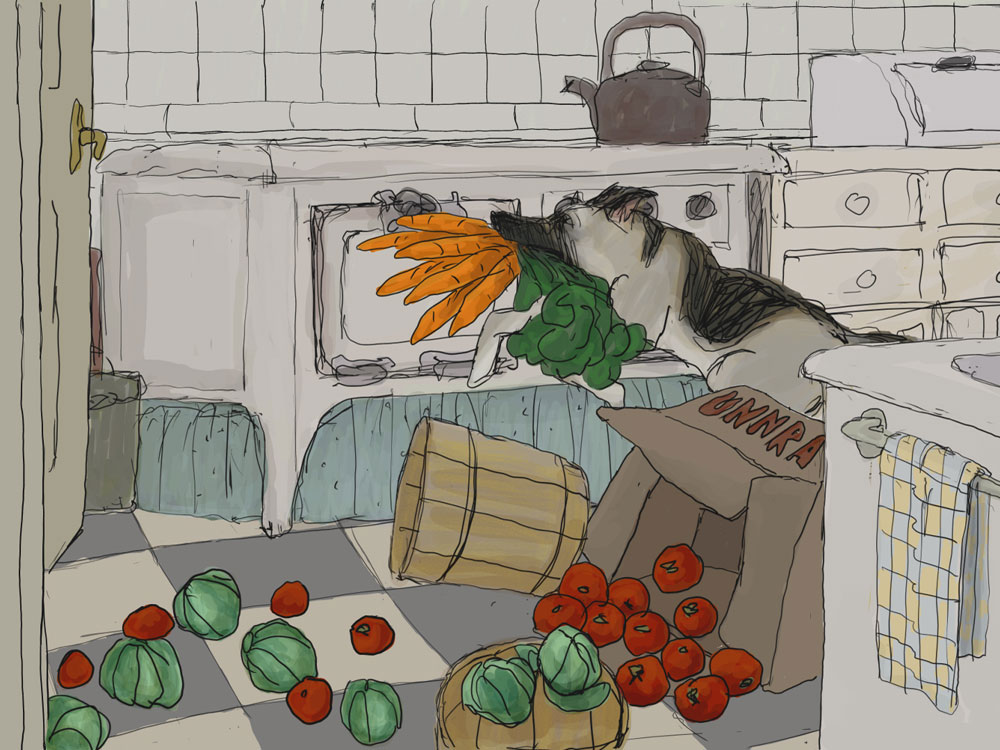 Who Let The Dog Out? Like many onscreen dogs, Tulip is rambunctious -- but her story is a somewhat more mature one than, say, the tale of Marley and Me.

Ackerley belonged to a generation of English writers -- as the editor of the BBC magazine The Listener, he fostered the early careers of Philip Larkin, W.H. Auden and Christopher Isherwood -- who understood that a visit to the corner greengrocer was all it took to uncover the bizarre, often hostile passions that are often fondly euphemized by Anglophile foreigners as British "eccentricity." And in the course of trying to find a species-appropriate mate for his pet, who herself has eyes only for her master's flapping trouser leg, Joe encounters a gallery of weird enablers as haplessly incompetent as he is. Among them are a retired army officer who keeps a sofa available for a quiet snooze on every floor of his country home, along with Joe's itinerant sister Nancy, a passive aggressor -- hilariously voiced by the late Lynn Redgrave, to whom the film is dedicated -- who "saw herself as a member of the household, while I saw her as a dependable kennel maid."

Enter excrement, both material and psychic: Hand-animated on a computer by directors Paul and Sandra Fierlinger, with swift black-and-white line drawings and gorgeously colored elaborations of Ackerley's cluttered Putney habitat, My Dog Tulip takes a warm and whimsical -- but aptly unsentimental -- view of Tulip's frequent fecal additions to the rubbish-strewn Thames-side landscape. Its aesthetics have nothing to do with the scenic: Here, beauty lies more in the hissing cloud of steam emitted by a train lumbering into a station than in the bucolic pleasures of the English countryside. (Indeed, there is retrospective menace in the butterflies flitting innocently around the rose-strewn suburban garden of a malevolent veterinarian.)

Voiced in a wonderfully dry wheeze by Christopher Plummer (the economical screenplay is by Paul Fierlinger), the self-deprecating Ackerley, who's depicted as tall, balding and shapeless, is as clear-eyed about his own faults -- an enduring ambivalence toward women tops the list -- as he is unsparing of others'. So expect no golden uplift here: Ackerley may be candid about his adoration of Tulip, but his subject is the crucible of love, devotion and betrayal that burns through all relationships, human and otherwise.

In the touching conclusion, in which Tulip finds her own way to carnal pleasure and Ackerley must decide how to dispose of the result, there comes a sad meditation on what he sees as a fundamental flaw in human relations: the desire to bend others to our own wills, when we might do better to honor theirs. (Recommended)