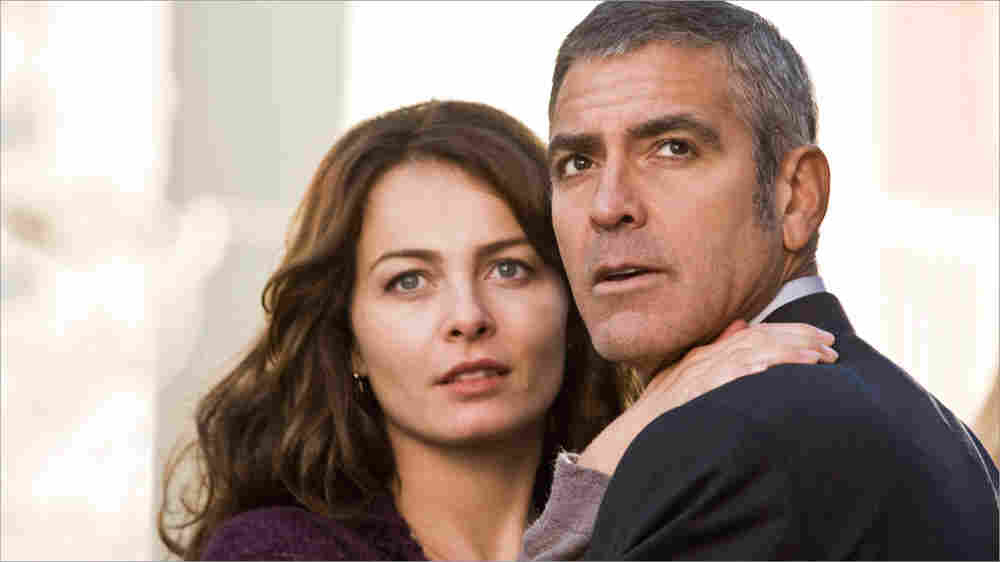 Love Story: Jack (George Clooney) is an American assassin whose job typically requires him to be a loner on the go. He falls for Clara (Violante Placido) while on an Italian retreat. Giles Keyte/Focus Features hide caption

'I Was Looking For You'

George Clooney is no stranger to big summer blockbusters, but here it is early fall, and he's appearing in a very different kind of film. The American is a bleak and atmospheric art-house thriller that's more of an aesthetic experience than an emotional one. If Robert Bresson, the austere French minimalist, had directed a James Bond film, it might have turned out like this.

Clooney plays Jack, a top-of-the-line American assassin facing a crisis. (If you're a big-deal killing machine, apparently, your life doesn't stay tranquil for long.) Jack is a different, more removed character than audiences are used to seeing Clooney play, a man all but unreachable behind his dark glasses. It's an interior performance that completely avoids the actor's usual high-wattage smile and suave good humor.

Director Anton Corbijn is a former photographer, so every frame of The American is impeccably composed and beautifully shot. This exceptionally high level of craft is satisfying, but it can involve us emotionally for only so long. Schematic tendencies in the script, meanwhile, stop us from caring about this film as much as it cares about itself.

Soon enough Jack gets an assignment. He doesn't have to kill anybody; he simply has to construct a high-quality weapon for another assassin, a mysterious woman.

Jack also has time for a steamy liaison with the gorgeous Clara, the latest in a long line of stunningly beautiful movieland women who just happen to be working as prostitutes in out of the way bordellos. Who knew?

But if Jack's girlfriend brings some life to his existence -- and to the movie -- don't get your hopes up. For while many of its elements whet our appetite and make the film worth seeing, The American doesn't manage to deliver a fully satisfying meal.