Accessibility links
Paying A Local Price For I-95's Global Promise Interstates changed the way we think about cities. The highways helped create the suburbs, the megalopolis and the 90-minute commute.  In return, Interstate 95 demanded sacrifices that changed some communities forever. 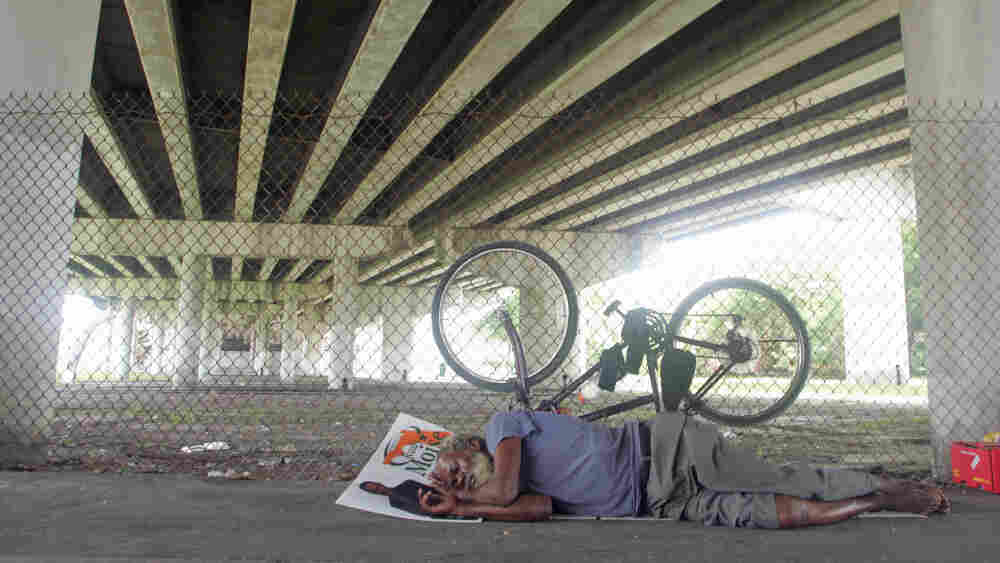 After the interstate system was built, planners, developers and commuters found it was not just a good way to travel between states, but also within them -- from city to city, from home to work, or maybe just a few blocks.

Interstates changed the way we think about cities. They helped create the suburbs, the megalopolis and the 90-minute commute.  They helped decide how communities would grow. But in return, Interstate 95 demanded sacrifices that changed communities forever.

If you drive north on I-95 in Florida from Miami, you'll eventually cross the Loxahatchee River and be in Martin County. That's where much of the sprawl and development-on-steroids that Florida is known for suddenly ends.

Maggy Hurchalla is proud to note that the Loxahatchee River is much the same as it was a century ago.  Standing on the riverbank, she describes it as "truly wild, beautiful, cypress-lined. Dark brown is the river, golden is the sand. To have that left at the top, just above the Gold Coast in South Florida, is a miracle."

Hurchalla says that's not just happenstance. She was a county commissioner in Martin County for 20 years and spent much of that time fighting with developers and pro-growth advocates over a single pressing question: Where should I-95 be built?

The section of I-95 in Martin County was the last segment of the interstate to be completed in Florida -- in part because of the battle over where it should run.

The original plan called for the interstate to run east near the coast, a route she says would have taken a toll on established neighborhoods and the Loxahatchee.  "You would have destroyed those oxbows and turns over a long piece of the river," she says. "As far as it being a beautiful, wild place -- it wouldn't have been."

Five Decades Of Growth Along I-95

The population in counties near Interstate 95 grew from about 40 million in 1960 to 64 million in 2008. Counties in Florida and Northern Virginia grew the most in terms of population and persons per square mile.

The analysis includes 206 counties that lie within 20 miles of the interstate.

A deal brokered by then-Gov. Bob Graham moved I-95's route several miles west -- crossing the Loxahatchee in a rural area where it had a minimal impact.

But in Florida and up the East Coast, that approach to building the interstate was the exception, not the rule.  Hurchalla says Martin County officials did something else that helped preserve the area's rural character.  They restricted growth -- both commercial and residential development -- near the county's I-95 interchanges.

"We have had two or three major developments over the years that have been turned down; that wanted to be I-95 cities," she says. "That kind of thing has happened all up and down the interstates of the world. It generally makes the interstates so they're not good for interstate travel anymore."

Growth That's Yet To Be Paid For

Just north, in adjacent St. Lucie County, deliberations about where to build I-95 took a different course.  There, I-95's route was largely determined by developers. Michael Busha, of the Treasure Coast Regional Planning Council, says when I-95 was being planned, developers from St. Lucie County successfully lobbied to build it far to the west, through area that had been farmland.

"They wanted an edge road -- or a 'ring road,' the planner called it -- so there would be access," Busha says. "And also, a really nice address. A new address for business and housing in the western portions of the city."

Today, 15 years after it was completed, I-95 is no longer on the edge of the city of Port St. Lucie; it runs right through the middle. After it was built, developers asked the city to annex 42 square miles west of I-95 for commercial and residential development.

It's a story that's played out up and down I-95 over the past 50 years from Maine to Florida. A federally funded highway system, designed for interstate commerce and national security, was embraced by local governments, planners and developers as a roadmap for growth.

In cities like Miami, I-95 also was used as a tool for urban redevelopment -- reshaping the city, or at least those parts of it which authorities felt needed reshaping.

One of those areas was Miami's historic black neighborhood, Overtown. In the 1940s and '50s, Overtown was a bustling neighborhood, the commercial and social center of Miami's black community. But when city, state and federal officials began looking for a route for the new federal highway, none of that mattered.

Marvin Dunn has studied Overtown and the impact of I-95. He's a retired professor from Florida International University and author of Black Miami in the 20th Century. 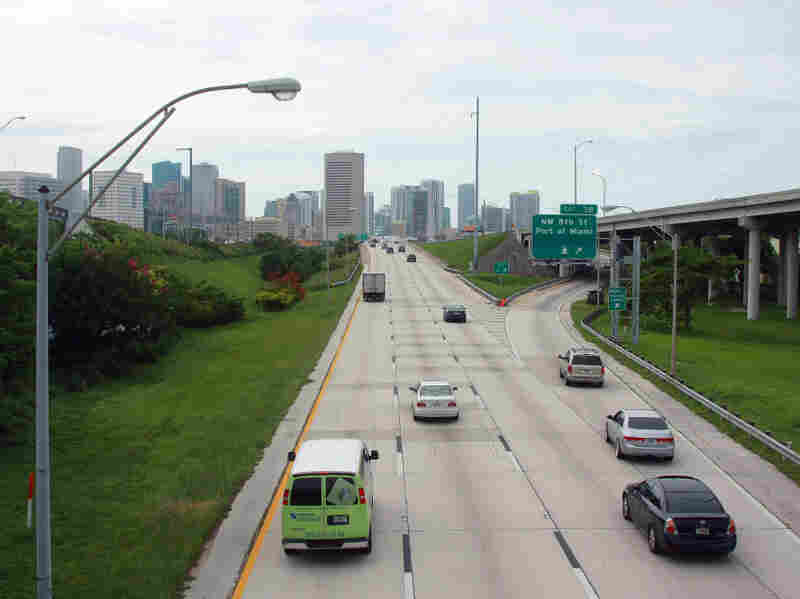 Cities like Miami used I-95 as a tool for urban redevelopment, reshaping the city -- or at least the parts of the city that authorities felt needed reshaping. Tom Ervin For NPR hide caption

"They had two choices," he says. "They could have brought the interstate straight down the old railroad track, which was vacant property in the industrial section of the community, which would have amounted to very little displacement of the population. The white, downtown business establishment didn't want that."

At the time, Dunn says even many black residents agreed that I-95 and urban redevelopment could be good for the community.  What residents hadn't expected, though, was how much of the community would be transformed for the road.

Twenty square blocks of Overtown were taken for one interchange alone, displacing some 10,000 people.  When I-95 was completed in the early 1960s, a thriving community of 40,000 had been reduced to one quarter of its size.

Something similar happened when I-95 was routed through Jacksonville's black neighborhoods.  It happened in Camden, New Jersey, too, and Nashville, Kansas City and Birmingham -- all cities where black neighborhoods were demolished when expressways came through.

Today, with an organic garden, a historic designation and some new businesses, Overtown is struggling for a comeback. But it will always be in the shadow of the interstate -- literally. I-95 passes on trestles overhead.  While he drives on the highway almost daily, Dunn says that pains him a little.  "It's a public amenity we all use with little appreciation for the cost involved in getting it."

And that might be something else to think about the next time you're tooling along on I-95 or another of the nation's interstates.  Did Americans shape the interstate highway system into what it is today, or did it shape us?