Accessibility links
How Losing Is A Profitable Game In Baseball You'd think times would be pretty tough for the last-place Pittsburgh Pirates, but the worst team in baseball has figured out a winning strategy for making money. 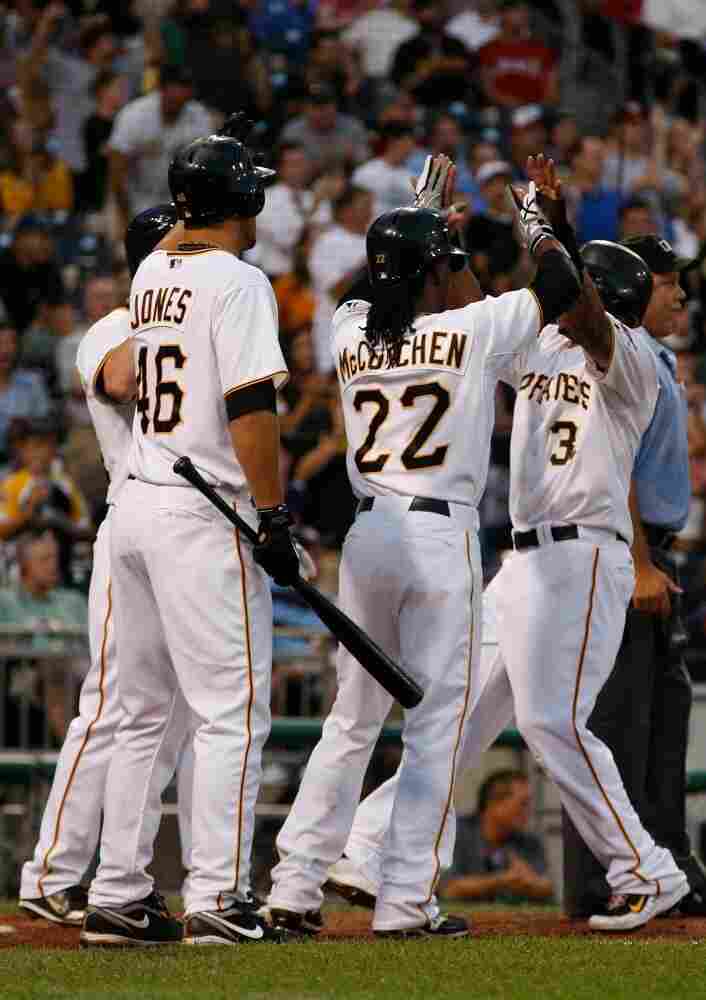 Pittsburgh Pirates players celebrate after scoring against the St. Louis Cardinals on Wednesday. It was a rare win for the team with the worst record in baseball this year. Jared Wickerham/Getty Images hide caption

You'd think times would be pretty tough for the last-place Pittsburgh Pirates, but the worst team in baseball has figured out a winning strategy for making money.

At 43-85, they're at the bottom of Major League Baseball standings, but that's nothing new. They haven't had a winning season since 1992.

But David Berri, a sports economist at Southern Utah University, says that while the Pirates' win column may be in the red, their bank account is eye-patch black.

"They appear to be putting profits ahead of winning," he tells NPR's Audie Cornish, describing some financial documents leaked to The Associated Press that detail the team's 2007-2008 finances. According to those documents, the Pirates made nearly $29.4 million in profit in 2007 and 2008.

For a team that received $39 million from MLB revenue-sharing in 2008, Berri says, that sort of profit indicates that the Pirates' owners aren't spending their money on better players -- they're pocketing it instead.

Revenue sharing works by funneling profits from highly competitive teams -- think the Yankees or the Dodgers -- down to gutter-dwelling clubs like the Pirates, who are, in theory, supposed to spend it on better players.

"What these documents show is that the Pirates looked at the baseball landscape and essentially said, 'Well, you're giving us about $40 million a year. ... That really wouldn't be enough to close the gap with the Yankees or the Dodgers, so rather than spend the money on players, we're just going to keep it.'"

Berri says there's a "general agreement" in baseball that teams will spend revenue-sharing money constructively, but no rules directing how the money is actually spent.

The premise of revenue-sharing is that a rising tide lifts all boats. Consistently bad teams like the Pirates do not draw as many fans when they play on the road, since fewer people will attend a game they know is going to be a blowout. Home teams, as a result, sell fewer tickets.

But Berri says the Pirates lack the incentive to spend money trying to become more competitive when they can be profitable losers.

For their part, the Pirates say they've made some changes since the years covered in the leaked documents.  They cite profits of only $5.9 million in 2009.

Still, Berri says, "There clearly is an incentive problem here. You would think that, going forward, baseball owners are going to be saying, 'We need to be thinking about how this money is being distributed.'"