Accessibility links
'As The World' Stops Turning, Are Soaps Dead? Forty years ago, there were 18 soap operas airing on the major networks; today, there are only six. Next month there will be one fewer when As the World Turns signs off after more than five decades on the air. Why don't we watch them anymore? 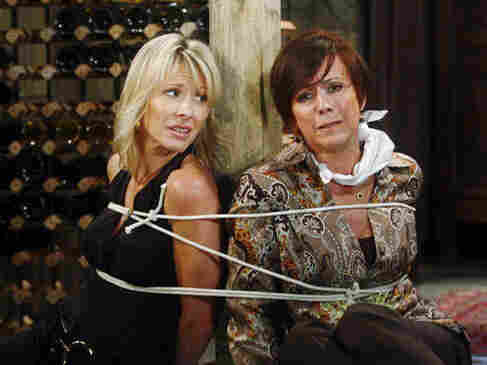 Emily and Barbara, played by Kelley Menighan Hensley and Colleen Zenk, spend some of their last broadcast time together on As the World Turns. CBS.com hide caption

Hardly anyone these days admits to watching soap operas, but they once dominated the daytime TV schedules.  Forty years ago, there were 18 soaps airing on the major networks; today, there are only six. Next month there will be one fewer when As the World Turns signs off after more than five decades on the air.

Peter Brash, a staff writer for As the World Turns, tells NPR's Audie Cornish that the soaps are really victims of their own success. "The serialized format has spread out just about everywhere you look," he says. Four decades ago, most shows presented a self-contained story every week. But now, "it's all branded to hook you in, to tune in tomorrow."

That means you can get your drama fix any time. You don't have to sit at home all day and devote five hours a week to keeping up with all the illicit affairs, car wrecks, secret babies and evil twins with amnesia.  Brash says the soaps were all about women -- but hardly any women are watching anymore.

Reality television isn't helping either, Brash says. "They're soap operas in themselves They're just -- real. So the audience is savvy enough to know they're watching one that's real -- 'Oh, she's really pulling her hair,' and 'Oh my god, she might hurt her" -- and one that's staged. So which one becomes more compelling?"

Brash has written some compelling story lines of his own in 30 years of writing for soaps. "Once, I was responsible for having two naked people fall from a meteor shower. They seemed to be from another planet, and they ran around naked one summer in Salem. I probably should have told the audience right away that the mad scientist in town had just put them up in a rocket ship and they really weren't aliens. It's always better if the audience is in on the joke in that way."

Traditional soaps -- naked mystery aliens and all -- may be on the wane, but Brash says their influence is felt all over the television dial.  "Soap operas are kind of lending their DNA to the rest of the entertainment media world, and that includes dramatic and reality [shows].  So I don't think it's a dead medium; it's just morphing into different things."