Accessibility links
On The National Mall, Divisions Kept In Check Washington, D.C., became a crossroads of American politics Saturday, when two rallies represented two very different ideas of what this country should be. At Glenn Beck's conservative rally, a church picnic atmosphere pervaded. Meanwhile attendees at Al Sharpton's gathering insisted they weren't there to disrupt.

The National Mall in Washington, D.C., became a crossroads of American politics Saturday. Two rallies represented two very different ideas of what this country is and should be. Tens of thousands of conservatives gathered to honor the military and Christian values, while a much smaller group demonstrated in honor of the 47th anniversary of Martin Luther King Jr.'s March on Washington.

Fox News personality Glenn Beck has brought together small-government Tea Party activists and traditionalist social conservatives with this message: "We simply must remember who we were, who we've been, who we can be -- not what we've allowed ourselves to become."

And though Beck insisted the event he hosted at the Lincoln Memorial was not about politics, he enlisted the support of a pretty popular Republican: Sarah Palin.

"May this day be the change point!" she told the roaring crowd. "Look around you, you're not alone! You are Americans!"

The crowd packed in around the reflecting pool and spilled out over half the National Mall, almost to the Washington Monument. Couples planted their folding chairs and families grabbed space under trees. As far as Washington demonstrations go, it was calm and genial, almost like a massive church picnic.

Betty Fitzgerald, who came down from Morton, Pa., wore a button on her lapel with a photo of Beck.

She said the day was not about politics, but about values.

"I guess maybe just to be a better person, and be good to your friends and neighbors ... and ... that kind of stuff always chokes me up a little," she said.

Fitzgerald and others said those values do inform their politics. And there were quite a few Tea Party activists in the crowd.

Joe Alek made the trek from Cinnaminson, N.J., with this message for elected officials: "You know, so we're not going to buy the lies anymore. Every politician wants us to buy in to them so that they stay in power. That's going to stop."

They're going to have to stand for something, he said, and keep to the Constitution.

"And when they don't follow that, they're out," he said. "Republicans and Democrats -- don't matter." 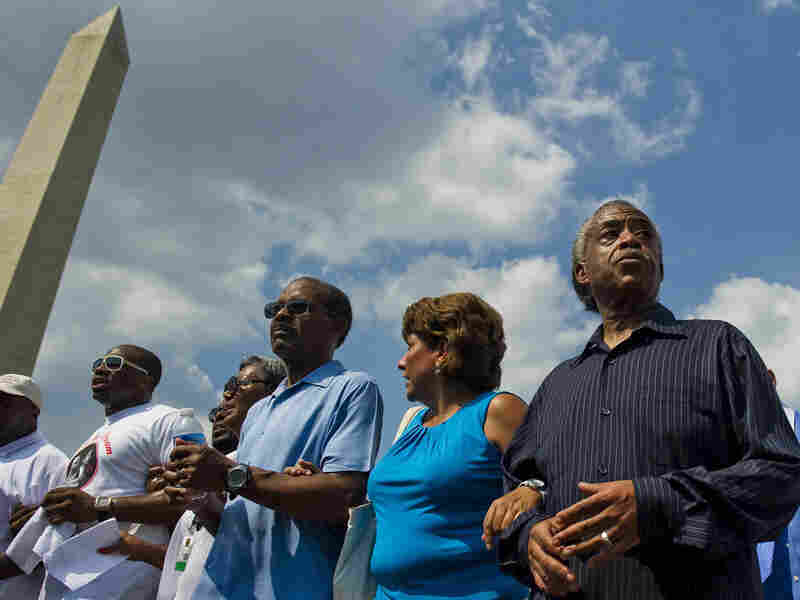 The Rev. Al Sharpton (right) walks with others past the Washington Monument to the Martin Luther King Jr. memorial site in Washington, D.C., on Saturday. The march commemorates the 47th anniversary of King's "I have a dream" speech. Jim Watson/Getty Images hide caption 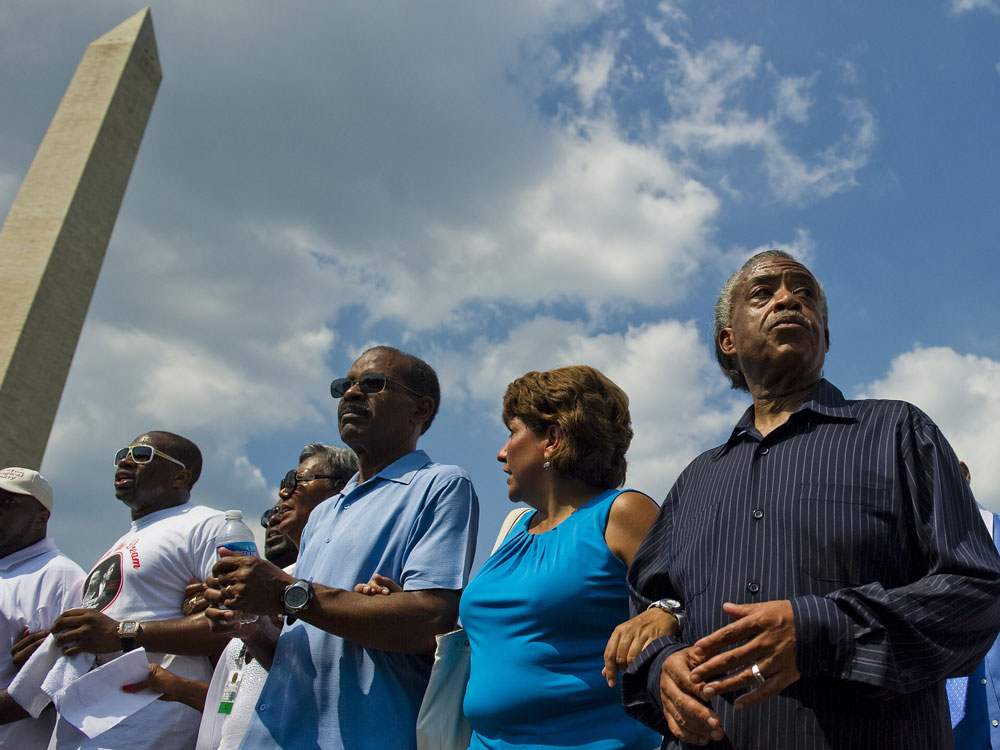 The Rev. Al Sharpton (right) walks with others past the Washington Monument to the Martin Luther King Jr. memorial site in Washington, D.C., on Saturday. The march commemorates the 47th anniversary of King's "I have a dream" speech.

The other rally in Washington on Saturday was hastily organized after black leaders realized Beck's event would take place on the date -- and at the same site -- of King's "I have a dream speech" 47 years ago. But demonstrator John Cook of Matawan, N.J., said they weren't trying to disrupt the conservative rally.

"You know, it's not about division; it's about us trying to reclaim the dream that Martin Luther King had 47 years ago," he said, "because a lot of the things that he spoke about have not been achieved today."

And when ralliers did cross paths later in the day, both sides were careful and polite.

It was a day that Cheri Newell said she won't ever forget. After a long bus trip from Valparaiso, Ind., she said it was worth it to be with Beck and the huge crowd of conservatives who were moved by his message.