Accessibility links
Entrepreneurs Fuel Post-Katrina Business Boom Oil and gas fuel the engines of employment and industry in New Orleans, but one legacy of Katrina may change that -- a surprising surge in entrepreneurs. The latest numbers show that 450 out of every 100,000 New Orleans adults have started a business since the storm. That's 40 percent higher than the national rate. But there's still a significant wealth gap between rich and poor. 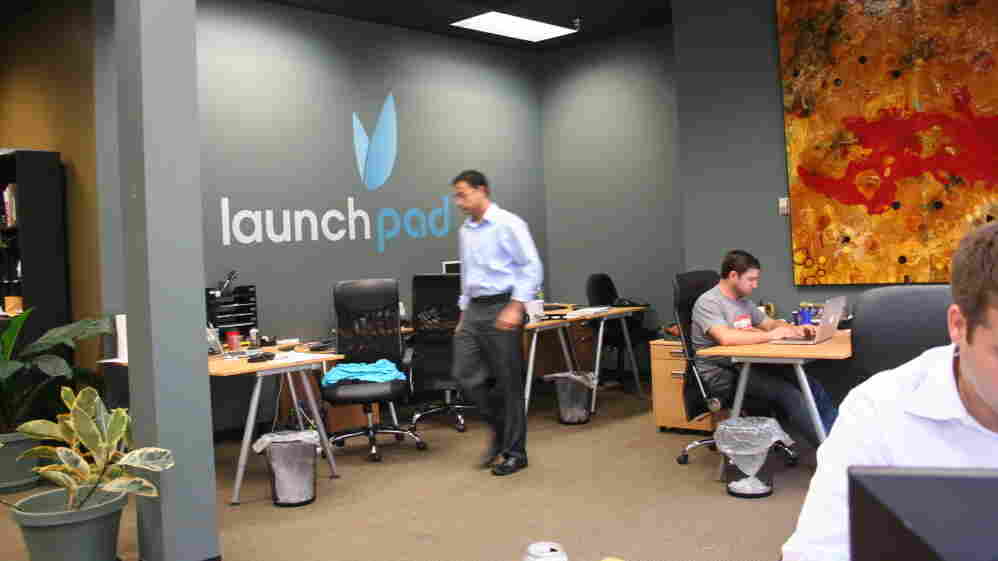 President Obama marked the anniversary of Hurricane Katrina on Sunday with a visit to New Orleans. His message: The Gulf Coast will not be forgotten, especially in the face of yet another disaster, the BP oil spill.

Oil and gas fuel the engines of employment and industry in New Orleans, but one legacy of Katrina could shift that focus -- a surprising surge in entrepreneurs.

Not long after the storm, New Orleans native Robbie Vitrano started a pizza place in the recovering neighborhood of Broadmoor. It's not just any pizza place: It's a health-conscious, probiotic, 10-grain crust, healthy pizza place.

Naked Pizza, as it's called, is a hit, and it's expanding rapidly. The first franchise outside New Orleans just opened, in Miami Beach, Fla. And 300 more are in development, in places as far away as Dubai.

How did such a success spring from a flood-ridden neighborhood? Vitrano says Katrina forced those who remained to step up.

A New Way Of Doing Business

"I don't think the recognition was there prior to Katrina about how important starting an economic base that wasn't oil and gas or tourism or what we have always done," says another local businessman, Chris Schulz.

"I'd say there was more of a complacency when it comes to economic development," Schulz says. "We didn't have that sense of urgency that we have had now."

Schulz is co-founder of Launch Pad, a company that offers low-rent office space for high-tech startups, complete with a phone, fax and yoga classes. It's warehoused in a space called the Intellectual Property Building, one of several startup hubs born after the storm. This growing business network, combined with pumped-up state tax breaks, has drawn young entrepreneurs from all over the country -- and the world.

There was always a baseline of this kind of talent in New Orleans, Schulz says, but those people weren't always connected to the business community.

"Any of the barriers to building a career for yourself that have traditionally existed -- all that type of stuff is gone. The community has become so much more welcome," he says.

Entrepreneurship By The Numbers

The boom in entrepreneurs is evident in the numbers collected by the Greater New Orleans Community Data Center.

Co-director Alison Plyer says that since the storm, 450 of every 100,000 adults in New Orleans have started a business. That's 40 percent higher than the national rate.

"I think that there's been a lot of small-scale entrepreneurial opportunities -- in construction and even debris hauling at first," Plyer says. "But there's also been some really innovative entrepreneurship that's happened here."

She says a huge influx of federal rebuilding money has helped insulate New Orleans from the depths of the recession experienced elsewhere in the country.

"The country lost 4.5 percent of all jobs," she says. "We lost just 1 percent of jobs. ... That buoyed our economy while the rest of the country was really floundering."

For people at the bottom of the economic ladder, though, things have been tougher. Plyer says the income gap between rich and poor has widened.

The average African-American household in the city makes $32,000 a year, she says -- 45 percent less than the average white household.

Business Booms, But Not For Locals

There's a wealth gap in the business community as well, according to Todd Higgins, who works out of the Center for Community and Workforce Development at the Urban League of Greater new Orleans. "It's a false positive on many magazine articles that they've written about the entrepreneur explosion here, because I guarantee the people that they talked to are people that came from somewhere else," he says.

"When you ask a local from the area, 'How do you feel about it?', they'll tell you they don't get the support. They don't get the help," Higgins says. "So it's almost like, 'I'll bring somebody in from elsewhere and give them all the resources they need, but my own people? I'll let them suffer a little longer.' "

Women- and minority-owned businesses are still struggling in New Orleans, especially the ones based in neighborhoods where the storm hit hardest.

"You can't force a bank to do anything," Higgins says. "If it don't want to loan any money to an African-American, it's not going to do it. It's always about those who know how to get funding, how to grow your business, and giving it to a group of people that come from Connecticut, New York.

"You know, the mom-and-pop stores that really keep it going have been family members who have started a business and just passed it on generation to generation," he continues. "But after the storm, it was difficult for anybody to get funding from any one of the local banks.

"When it gets down to making a banker to go out of his four walls to go into a small, established mom-and-pop business, it's almost near impossible."

Angele VonDerPool agrees. She's the program director of the Urban League's Women's Business Resource Center. VonDerPool says that for all of New Orleans to capitalize on the bright points in its economy, growth and inclusion should be the goal.

"It is five years post-Katrina, but it still has not changed," she says. "It's still a fight in the trenches for development, redevelopment, revitalization. So continue to look at New Orleans, I'd say, just as if Katrina happened last year. Because it's still a battle."