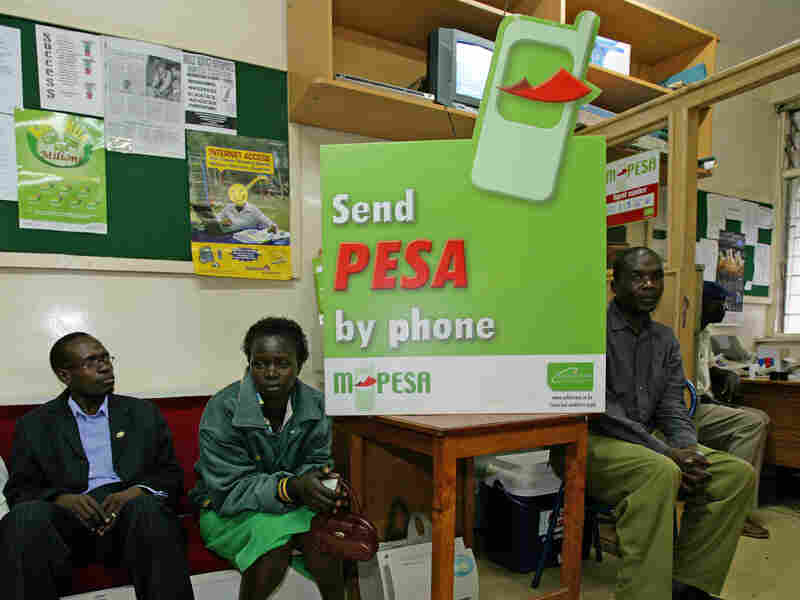 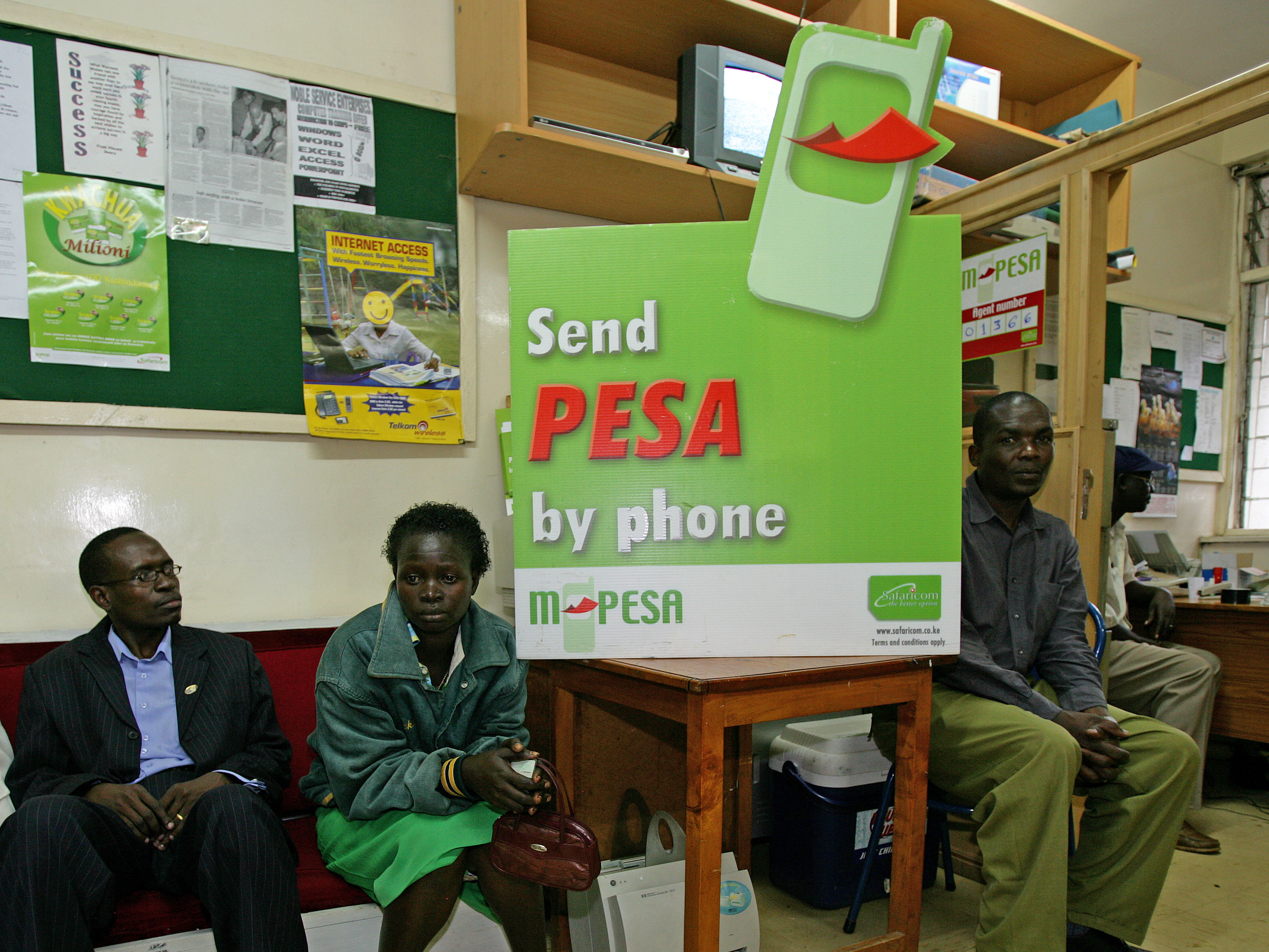 The M-PESA cell phone finance company offers clients financial transfers and withdrawals via mobile phones. The spontaneous and unplanned explosion of m-banking in the developing world has gone well beyond expectations.

Jamie Zimmerman is director and Jamie Holmes is program associate of the Global Assets Project at the New America Foundation.

As recently as two years ago, mobile banking in the developing world was an object of skepticism among financial insiders. While proponents argued that cell phones could revolutionize personal finance in poorer countries, regulators warned of money laundering and most bankers worried that low customer balances wouldn't be worth the transaction costs. Many thought of "m-banking" as a niche product that, at most, could maintain the loyalty of existing traditional bank customers. Few imagined it might bring savings, credit, and liquidity to those who don't belong to a bank in the first place.

Now, however, the doubters have been proved entirely wrong. The spontaneous and unplanned explosion of m-banking in the developing world has gone well beyond expectations. And the effects for development could be monumental.

M-banking began with the widespread use of prepaid cell-phone airtime as an informal currency. Migrant laborers across the developing world would text the serial numbers on prepaid airtime cards to loved ones elsewhere in the country; the recipients of the text messages would then sell the serial numbers to local mobile airtime vendors in exchange for cash, minus a small commission. By remotely selling their airtime this way, laborers were able to avoid taking long bus rides home to the countryside to hand over cash in person.

Three years ago, Safaricom, the Kenyan subsidiary of Vodafone, launched "M-Pesa," a mobile money-transfer service that essentially allowed vendors of mobile airtime cards -- there are apparently 100,000 such vendors in the country -- to institutionalize what they had been doing informally. M-Pesa wasn't the first service of this kind, but it has become the most successful by far. Today, M-Pesa has roughly 10 million customers in Kenya, 40 percent of the adult population. It's the top vehicle for money transfers in the country, with $10 million a day in transactions. Safaricom posted record profits in 2009, some $250 million. Other m-banking products that have met with surprising success are Celpay in Zambia and Gcash and Smart Money in the Philippines.

In May, Safaricom took it one step further, partnering with Equity Bank and offering M-Kesho, an interest-bearing savings account, to all M-Pesa users. Subscribers can now use their cell phones to transfer money from their M-Pesa accounts -- using Safaricom's existing network of nearly 20,000 licensed card vendors -- into their M-Kesho accounts. M-Kesho users are also able to access mobile microinsurance and microloan products. By registering SIM cards that double as individualized account numbers, Equity Bank is seeing 8,000 new customers each day, and its CEO, James Mwangi, recently predicted that, in mere months, Kenya "will be the most-banked country in Africa and the developing world."

M-bankers worldwide already use their mobile accounts as de facto savings accounts simply by keeping cash credit: A 2008 survey found that 75 percent of M-Pesa users were already using their mobile accounts to store money. Respondents found the service over five times safer as a vehicle for savings than traditional methods like keeping the money at home. In fact, more than 95 percent found the service not only safer but faster, more convenient, easier to use, and cheaper.

These developments foreshadow a range of exciting opportunities in servicing the low-income unbanked and reducing the corruption associated with loans and financing in the developing world. With nearly 5 billion mobile subscribers in the world and airtime vendors far exceeding developing-world bank branches, it shouldn't be a surprise that M-Pesa has already inspired 60 copycat businesses across the globe.

By 2012, mobile banking operators could see nearly $8 billion in revenue just by expanding their services to the currently unbanked, according to an estimate by the Consultative Group to Assist the Poor (CGAP). In the developed world, m-banking is gaining traction in Australia, Britain, Korea, and Singapore, as well as in the United States. But only in the developing world does m-banking have such extraordinary ancillary potential. M-banking is the best opportunity yet to deliver financial services to the 1 billion people in the world who don't have a bank account, but do have a cell phone.

The effects of m-banking on the developing world are likely to be huge. The quality and reach of a country's financial services are "crucial determinants of economic growth," as Ross Levine, an economist at Brown University, once wrote. In one study of the impact of financial access on poverty in India, economists Robin Burgess and Rohini Pande estimated that every "1 percent increase in the number of rural locations banked per capita reduced rural poverty by 0.42 percent" and increased economic productivity by 0.34 percent. The potential positive economic effects in Kenya alone are striking: this year, Safaricom projects it will transfer the equivalent of 20 percent of Kenya's GDP through M-Pesa. One scholar who has studied M-Pesa, Olga Morawczynski of the University of Edinburgh, estimates that rural households that are mobile money subscribers see their incomes increase 5 to 30 percent. And though an increase in income is often only a short-term poverty solution, savings and asset-building, as encouraged by programs like M-Kesho, move people toward sustainable economic independence in the long term. Plus, the interest on loans through such programs is usually far lower than what you'd get with an informal moneylender, meaning that the risk of accruing debt is minimal.

There are downsides, of course. Some rural women have complained that their husbands working in the cities, now able to transfer them funds electronically, make far fewer visits back home. Increased demand, also, has strained the ability of some rural agents to keep enough cash on hand for withdrawals. And the successful expansion of m-banking still faces some serious infrastructural and regulatory hurdles, though aid donors -- like the Bill and Melinda Gates Foundation, which has invested heavily in m-banking in places like Haiti -- have recognized the technology's immense potential.

No matter what happens, however, in the context of global development the financial success of m-banking is already one of the greatest success stories of recent years. As U.S. Secretary of State Hillary Clinton said in January, these technologies are "allowing billions of people to leapfrog into the 21st century after missing out on 20th-century breakthroughs." And all it takes is a keystroke.