Accessibility links
The Nation:The Next Frontier Of Drug Policy Reform A new law narrows the gap in cocaine sentencing and signals a shift in priorities. Ethan Nadelmann of The Nation argues the Fair Sentencing Act, signed by President Obama on August 3, is at once a historic victory and a major disappointment. 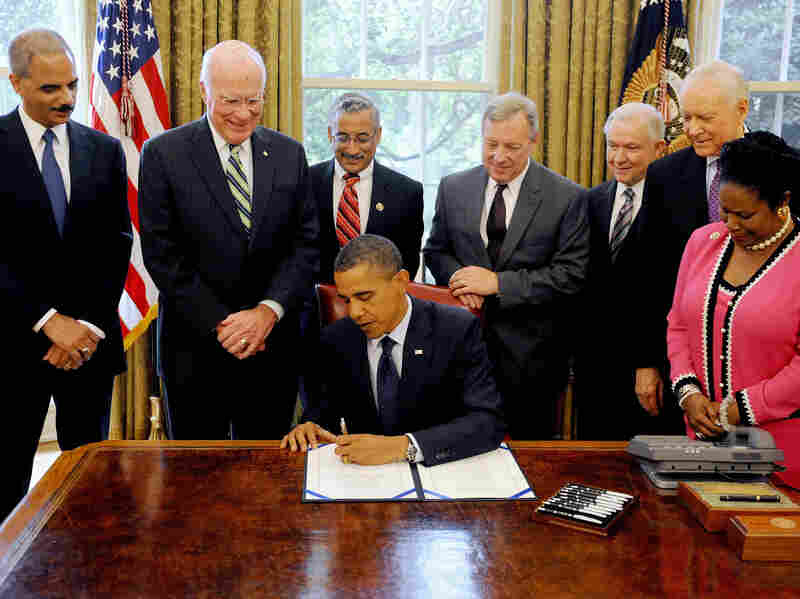 Ethan Nadelmann is the founder and executive director of the Drug Policy Alliance.

For those of us who fought long and hard to reform the notorious 100-to-one crack/powder cocaine disparity in federal law, the Fair Sentencing Act, signed by President Obama on August 3, is at once a historic victory and a major disappointment. It's both too little, too late and a big step forward.

The Anti-Drug Abuse Act of 1986, which punished the sale of five grams of crack cocaine the same as 500 grams of powder cocaine, reflected the bipartisan drug war hysteria of the day and was approved with virtually no consideration of scientific evidence or the fiscal and human consequences. The argument for reform has always been twofold: sending someone to federal prison for five years for selling the equivalent of a few sugar packets of cocaine is unreasonably harsh, and it disproportionately affects minorities (almost 80 percent of those sentenced are African-Americans, even though most users and sellers of crack are not black).

The new law increases the amount of crack cocaine that can result in a five-year sentence to 28 grams (i.e., an ounce), thereby reducing the crack/powder ratio to 18-to-1. It also eliminates the five-year mandatory minimum sentence for simple possession (without intent to distribute) of crack cocaine, thereby marking the first time since 1970 that Congress has repealed a mandatory minimum sentence.

What is the broader significance of the new law?

First, it's one more indication that Obama is making good on his commitment to roll back the drug war. Few reformers, including myself, would have bet that Obama would deliver -- in fair measure, and within eighteen months -- on all three of the pledges he made while running for president. He said he'd reverse the government's antagonism to state medical marijuana laws -- and he did, with the Justice Department announcing last fall that it would essentially defer to local authorities in determining whether medical marijuana facilities were operating legally. He also said he'd support ending the ban on federal funding for needle exchange programs to reduce HIV/AIDS -- and he did.

And he said he'd push to repeal the crack/powder disparity -- which he did. That commitment appeared on the White House website within 24 hours of his inauguration. Attorney General Eric Holder described it as a personal priority and a legacy issue for him. White House and Justice Department officials joined with Congressional Black Caucus (CBC) members and other top legislators to try to eliminate the disparity -- and then to achieve the best possible compromise.

To be sure, the Obama administration has been disappointing on other aspects of drug policy. Law enforcement and futile interdiction programs make up the large majority of drug war expenditures, as they have since the Reagan era. Politics continues to trump science, notably in blocking heroin maintenance, supervised injection facilities and other harm-reduction innovations that have proved highly successful abroad. And Obama's drug czar, Gil Kerlikowske, refuses to acknowledge any merit to the arguments for reforming marijuana policy. There's plenty of work left, but at least Obama made good on his specific commitments.

The argument for reform has always been twofold: sending someone to federal prison for five years for selling the equivalent of a few sugar packets of cocaine is unreasonably harsh, and it disproportionately affects minorities.

The victory also showed that traditional civil rights leaders are finally beginning to prioritize criminal justice reform. Black support for the late-'80s drug war helped legitimize the policies that led to the incarceration of millions of young African-Americans. The dawning realization of what they had wrought led the Rev. Jesse Jackson, Representative Charlie Rangel and then–SCLC president Joseph Lowery to start calling for reform of the crack/powder disparity in the early 1990s -- but it never became a priority for them, the NAACP, the Leadership Conference on Civil and Human Rights or the CBC. The key advocates for the past two decades have been organizations committed to broader drug and sentencing reform -- the ACLU, the Open Society Policy Center, the Sentencing Project, Families Against Mandatory Minimums and my organization, the Drug Policy Alliance.

Some would argue that sentencing reform is still a low priority for most civil rights organizations, but at least African-American leaders are beginning to own the issue. CBC members on the House Judiciary Committee -- including Bobby Scott, Sheila Jackson Lee, Maxine Waters, Mel Watt and chair John Conyers -- have pushed hard to repeal not just the crack/powder disparity but also mandatory minimum sentencing more generally. NAACP president Ben Jealous has described criminal justice reform as his top priority. And the Leadership Conference has at last stepped up to the plate.

Change is clearly afoot. Black legislators are often at the forefront of sentencing and other drug policy reform efforts in state capitals. Michelle Alexander's powerful new book, The New Jim Crow, in which she calls out civil rights organizations for failing to grasp that the drug war is accomplishing what Jim Crow once did, is stirring up much-needed debate. And the endorsement of California's marijuana legalization initiative, Proposition 19, by both Alice Huffman, the influential head of the California NAACP, and the National Black Police Association proves that courageous leadership is possible.

Perhaps most surprising was the apparent ease with which the crack/powder reform gained bipartisan support. Dick Durbin may have provided the key leadership in the Senate, where the bill passed by unanimous consent, but the reform would have died without help from Republicans like Jeff Sessions, Orrin Hatch and Lindsey Graham. Ditto in the House, where support from the libertarian Ron Paul and his Republican colleagues James Sensenbrenner and Dan Lungren, both longtime proponents of the drug war, trumped the opposition of Lamar Smith, the ranking Republican on the Judiciary Committee.

There's no telling what personal, political or philosophical considerations motivated these Republicans to abandon their party's obstructionist playbook. Hatch and others had advocated for clemency for a few victims of the harsh mandatory minimum laws. The law's costs and gross racial disproportionality may have offended core principles. Advocates in Congress and outside may have been persuasive. And certainly a surprising array of conservatives joined the call for reform, including Grover Norquist, the libertarian director of Americans for Tax Reform; Ward Connerly, the influential African-American opponent of affirmative action; and David Keene, chair of the American Conservative Union, which hosts the annual Conservative Political Action Conference. Also influential was Pat Nolan, the formerly incarcerated Republican state legislator from California, who spearheaded the campaign by Chuck Colson's Prison Fellowship and its criminal justice reform arm, Justice Fellowship, to sensitize evangelicals and other conservatives to the injustices of the law.

This outbreak of bipartisanship is unlikely to extend to other areas of drug policy and criminal justice reform. Indeed, Senator Tom Coburn, who provided crucial support on the crack/powder bill, is the principal obstacle to Jim Webb's proposal to create an independent commission on criminal justice policy. But the Republicans' support represents a tacit acknowledgment that the drug war has gone a bit overboard and that a brief moratorium on "tough on crime" rhetoric is warranted. Whether it provides a precedent for future cooperation remains to be seen.

So what's next on the agenda? The immediate priority is to make the crack/powder reform retroactive so that those already serving harsh sentences will be treated the same as those sentenced in the future. The second priority will likely be broader reform of mandatory minimum drug laws.

The third priority, I would argue, has to be national reform of marijuana prohibition laws. Arrests for marijuana possession, typically of tiny amounts, account for 44 percent of drug arrests nationwide and disproportionately affect African-Americans. Few are being sentenced to long prison terms, but most are acquiring criminal records that will handicap them for life. Forty percent of Americans, possibly more, now believe that marijuana should be legally regulated and taxed. (The same cannot be said of most other illicit drugs.) If California voters approve Prop 19 in November, the country will quickly find itself in the midst of an intense debate on marijuana policy. But even if they don't, the issue will continue to pop up on ballot initiatives and in state legislatures and Congress. As my colleague Jasmine Tyler said regarding the next frontier of drug policy reform and racial justice, "It's time to make marijuana 'the new crack.'"