Accessibility links
Our Storied Lives: Narrating, Navigating Adversity Shaun Parker moved from Menasha, Wis., to Los Angeles to pursue his dream to work in film. After nearly two decades of setbacks and stalling, Parker began crafting a new life story -- one that got a kick-start with an appearance at the storytelling series Mortified. 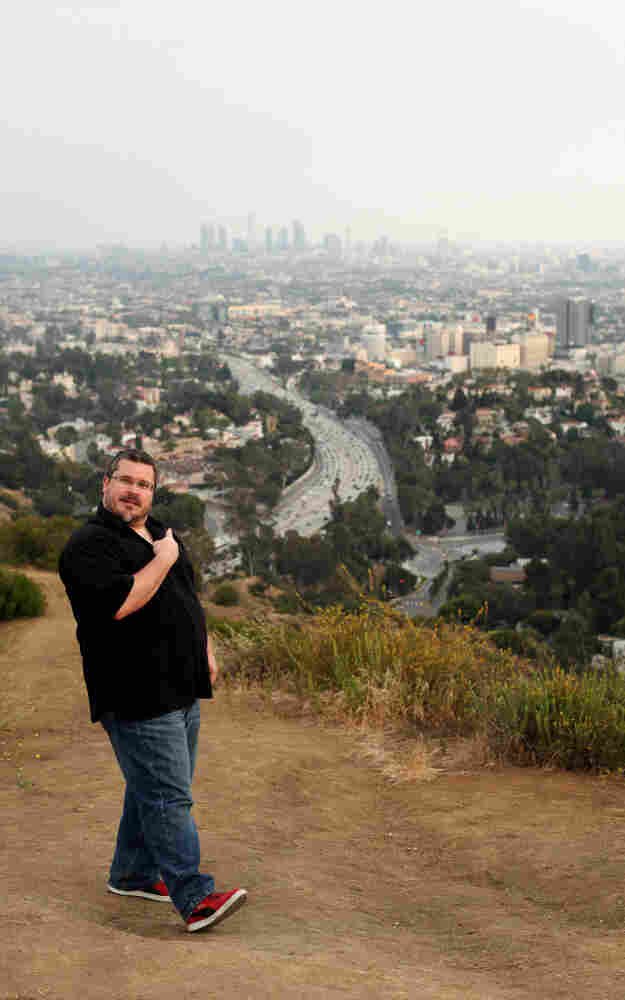 Shaun Parker moved from Menasha, Wis., to Los Angeles to pursue a career in film nearly 20 years after his initial plans were derailed by an illness in the family, but he never lost the determination to craft his own life story. At the end of his life, Parker says, he wants to be able to say, "I was part of something that moved you." Katie Falkenberg for NPR hide caption 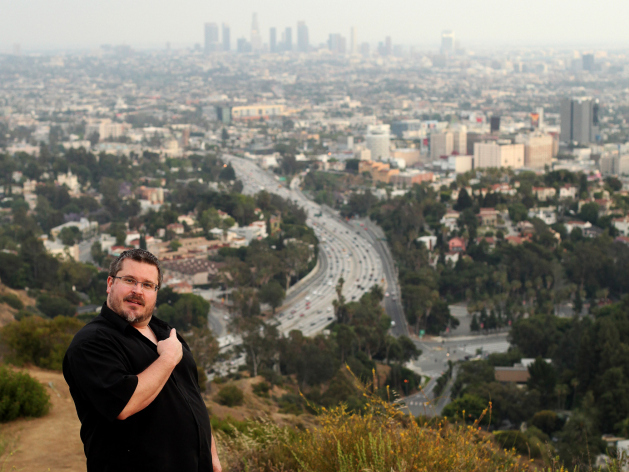 Shaun Parker moved from Menasha, Wis., to Los Angeles to pursue a career in film nearly 20 years after his initial plans were derailed by an illness in the family, but he never lost the determination to craft his own life story. At the end of his life, Parker says, he wants to be able to say, "I was part of something that moved you."

In Part 1, we met Shaun Parker, a man from Menasha, Wis., who as a teenager was fascinated with the movie Excalibur.

"Excalibur made me think that just like Arthur, I had a destiny," Parker says. That led him to seek true love -- his own Guinevere, King Arthur's queen -- in the form of a young woman named Heidi.

Nearly 20 years later, Parker is on a stage in Hollywood, telling the story of Heidi as part of a show called Mortified. The show features adults recounting painfully funny stories from adolescence. They often read from diaries or journals.

Mortified Executive Producer Neil Katcher says the show isn't just about humiliation -- the act of reliving a painful event through these stories is actually one way of coping with adversity.

"When we're children, we think that getting rejected by that crush would be the end," Katcher says. But it's not, he says, which is reassuring.

Onstage, Parker is showing an incredibly cheesy rock video he made for Heidi in which he professed his love to her. But instead of showing her the video, he sent her a love letter and she sent him one back. Rejected.

The audience is laughing and cringing because they see a bit of themselves in Parker. He's not Hollywood thin; he's real. And hearing a story from a regular guy like Parker helps us feel better about our own stories of humiliations. He survives. So will we.

The Story Veers Off Course

Whether we're watching Parker or Shakespeare, we use stories to gain a perspective on our own lives, says Antonio Damasio, a neuroscientist at the University of Southern California.

"At the end of a great big drama in which everybody dies, you know that you are not going to die," Damasio says. "But maybe you are going to take some lessons out of why on Earth poor Hamlet got into the trouble he got, and why he had to be turned into mincemeat."

So we do everything we can to make sure our own life stories turn out differently. The audience at Mortified loves that Parker uses his romantic failure as a springboard to leave Menasha and pursue a new destiny in Hollywood and a career in film. Almost every line is getting a laugh, and everyone is rooting for him.

At the storytelling series Mortified, performers dig through old diaries and love notes to find a glimpse into their ridiculous, self-centered, pathetic and comical adolescent lives. Then they get onstage and share it with an audience of complete strangers.

At a recent Mortified show, Shaun Parker shared the story of a love letter he sent to his teenage crush. Watch a clip from his performance below. We guarantee you'll be on the floor laughing. Or crying.

But then Parker's story takes an unexpected turn.

"Out of nowhere my dad got sick," he says, his voice suddenly choked with emotion. "And we were told time was precious. So I stayed where I was needed."

At this point, the 250 people watching Parker are totally silent. He isn't talking about being mortified anymore. He's talking about mortality.

Parker ran straight into a major problem faced by our species -- it's that we know we're going to die and we have to make that bearable. Damasio says that stories are one way we do that. We create stories about an afterlife or stories about things we do in this life that give it meaning: the businesses we build, the children we raise, the books we write, the good we do.

"All of these things are attempts by clever human beings to cope with fundamentally a rather bad deal, which is that you are alive, you enjoy your life and there are others that you love that can be lost," Damasio says.

Writing The Next Chapters

But there is another way stories help us survive when we're experiencing pain, he says. Because we know our own life is a story, we are able to look ahead to the part we haven't lived yet and start writing those chapters.

I remember distinctly feeling if nothing else ever happens for me out here, I have that moment that I stood in front of 250 strangers and I moved them.

"When I'm talking to someone who is discouraged or depressed, I tend to say, 'Don't let yourself be in this moment,' " Damasio says. " 'Try to think instead about the possible future and try to be literally pulled by that future. Imagine something that you would like to achieve.' "

And that's what Parker did. But as it turned out, the pain he had to face wasn't his father's death; his father's illness -- cancer -- actually went into remission.  The pain came from being stuck in Menasha instead of going to Hollywood.

This draft of his future kept him going during his years in Menasha. He did some improv work and learned video editing.  And one day, he started tinkering with that video love letter he'd made for Heidi when he was a teenager.

Part 1: Our Storied Lives: The Quest For 'Something More'

In the video, Parker is lip-syncing to a heavy metal song by White Lion called "Wait." Parker tells the audience at Mortified that he figured he could use his computer editing skills to finally make his lips match the words.

"When I finally put it all together, I realized something," he tells the audience. "The 'Wait' video wasn't necessarily a message for Heidi at all -- it was a message for me to be something greater than myself."

And that wasn't happening in Menasha. So at the age of 37, Shaun got in his car and headed west for the land of dreams and palm trees. And before long, he met Katcher and the other producers at Mortified. They helped Parker realize that the story he had to tell was his own.

Onstage at Mortified, Parker is coming to the end of his performance. He tells the audience: "Here I stand before you the newest and oldest production assistant of Fox Television's post-accounting division."

He then shows them "the final moments of the video that took nearly two decades to realize."

"The crowd just started cheering so loudly that you could feel the cheers sort of just shaking the whole room," Katcher says.

And Parker says that moment -- when he became a storyteller -- changed his life.

"I remember distinctly feeling if nothing else ever happens for me out here, I have that moment that I stood in front of 250 strangers and I moved them," he says.

Since then, that moment onstage has helped Parker accept the present -- one in which his father has died, one where he works as a clerk while looking for acting jobs, and one in which he lives in a shoebox apartment on Santa Monica Boulevard.

It's not much, but Parker thinks it's a pretty good place to start writing the next part of his life story.

The first part of this story aired Monday, Aug. 30, on Morning Edition.

This story was produced by Rebecca Davis and edited by Alison Richards.

'Mortified': Step 1, Exhume Your Past; Step 2, Share With All

If you've ever dug out your old diaries and read through them on a rainy afternoon, you'll know firsthand what ridiculous, pathetic, self-centered, comical and, yes, sympathetic creatures we all were as adolescents. Now imagine taking those words and reading them aloud in front of a roomful of strangers, exposing all your petty comments about schoolmates and the momentary crushes -- it makes you blush just thinking about it. Well, apparently there are folks all around the country who want to reveal their 12-year-old selves in public, and they do so, if chosen, for performances of a live show called Mortified.

The idea for Mortified started in the late 1990s when executive producer Dave Nadelberg ran across a love letter he'd written in high school but had never sent. Upon reading it and sharing it with friends, he realized the wealth of material these old diaries and journals hold -- material that almost never sees the light of day. So he and co-executive producer Neil Katcher formed Mortified in 2002 and started working with people willing to dig through their own unearthed material to present before an audience.

Fortunately for the audience, Mortified performers don't just stand up onstage and read raw, unedited material. Katcher says he and Nadelberg put people through a curating process. "It is much the same way that a documentary filmmaker or a museum curator might look at a collection of materials and fine-tune it down to a specific collection."

Working with diaries, love letters, poetry and photographs, they pull out the funniest bits and tie them all together into a sharply focused, 8-12 minute narrative. In the end, Katcher says, the experience can be cathartic for both the contributor and the audience -- to experience once again the comic tragedies that consumed us as adolescents and to be reminded that we have, in fact, survived even the most painful and embarrassing of life's events.