Accessibility links
Google Unveils System For Prioritizing E-Mail The company says the feature will help set priorities for a user's inbox and ease up that sense of information overload. Google says people who used the new system in its testing phase saved about a week's worth of time over the course of a year. 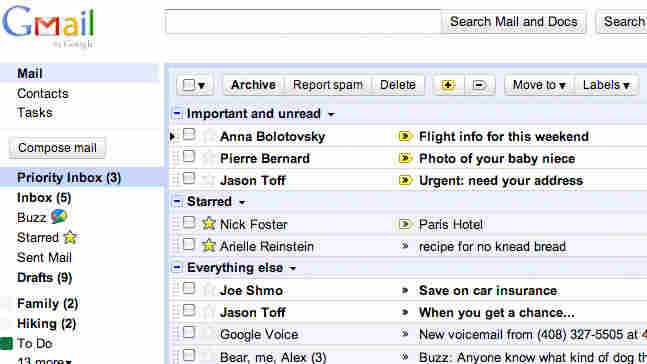 Google has created a new priority inbox system for its Gmail service. The new system sorts through your messages and puts the important ones in a separate box called Important. hide caption

If you feel like you can't deal with all the e-mail in your inbox, you are not alone. Market researchers say nearly 300 billion e-mails are sent each day. On average you will send and receive 110 messages daily. Google is releasing a feature Tuesday for its Gmail service that the company says will help set priorities for your inbox and ease up that sense of information overload.

Not sure which e-mail to read first? Wrong e-mails turn up in the spam box? The new Google system sorts through all of your messages and puts the important ones in a separate priority inbox.

People who used the new system in Google's testing saved about a week's worth of time over the course of a year, Glotzbach says.

"Any technology that can help people choose what's important and what isn't can be valuable if used in the right way," she says.

Got that? Egan said, "If used in the right way." Gmail may be able to learn based on your past actions, but what if you think too many things are important?

"When you're trying to manage your e-mail and your inbox, managing yourself is more important than managing all of those e-mails," Egan says.

Egan has seen some people get so obsessed with using time-management software that they waste even more time.

"They become a slave to the technology," she says, "and spend more time managing the technology than using it as an advantage to them."

The question is, how can you develop technology that gets around the human tendency to waste time? Dr. Michael Freed is working on an answer. He's a researcher at SRI, a nonprofit that does research for government and business. Freed wants your inbox to actually do tasks for you.

"What you'd like to experience is have your e-mail client say, 'Hey, looks like this message requires that you go change the sales forecast for Acme upwards by 15k for the third quarter. How about if I just go change cell c23 and make that change for you?' "

Freed says we are getting closer to the day when that will be possible. But he does see Google's new tool as an advance -- a step up from just having a spam box. Still, for some, says Freed, the best answer may be an old-fashioned human assistant who, at least for now, is likely to still have plenty of work to do.