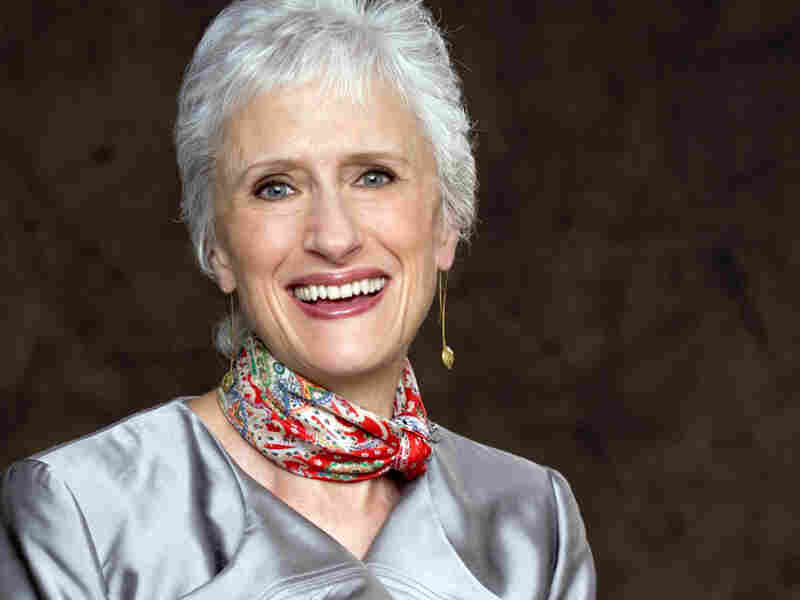 In 1982 Sara Paretsky challenged the mystery-writing genre by introducing a female detective who was both a thinker and a fighter. Steven E. Gross hide caption 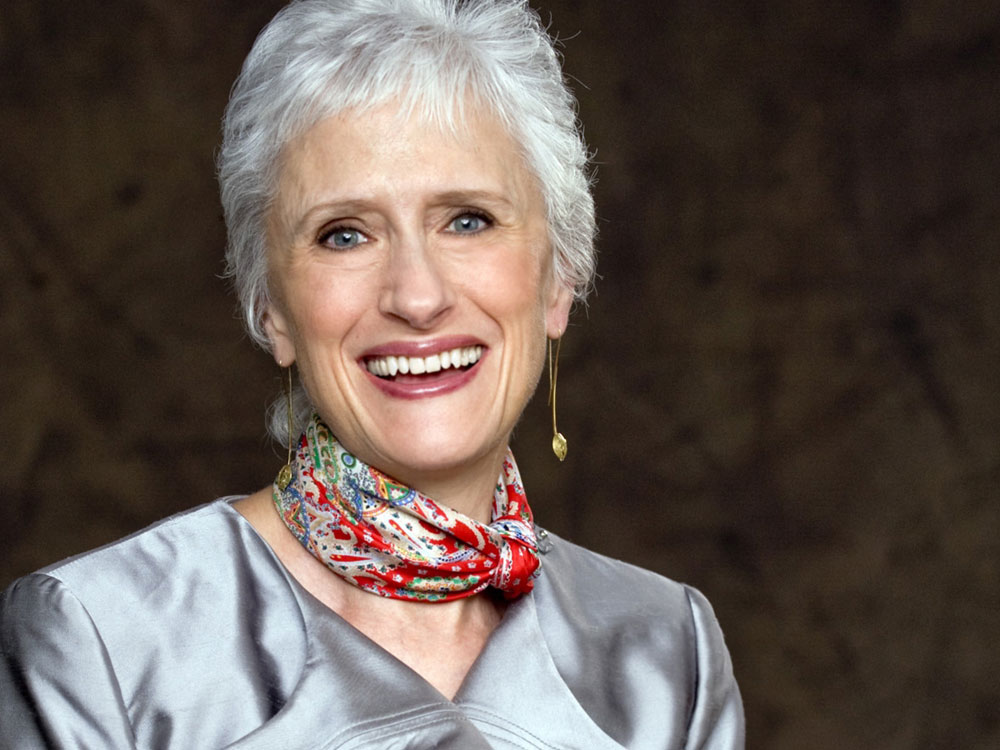 In 1982 Sara Paretsky challenged the mystery-writing genre by introducing a female detective who was both a thinker and a fighter.

The case seems straightforward: A young woman is shot to death outside a nightclub in Chicago and the murder weapon turns up on the bed of a disturbed Iraq war veteran. But when the father of the accused puts private detective V.I. Warshawski on the case, it soon becomes clear that the case is anything but neat and tidy.

Sara Paretsky's latest novel, Body Work, takes her heroine into the world of cutting-edge performance art, PTSD and the mob. It's the 14th installment of Paretsky's Warshawski crime thriller series, which she started writing more than 20 years ago.

Paretsky tells NPR's Neal Conan that letting Warshawski age along the years has been a challenge: She isn't as fit as she used to be and she can't drink as much as she used to. But the writer says she's trying to keep her heroine's age from slowing her down too much. 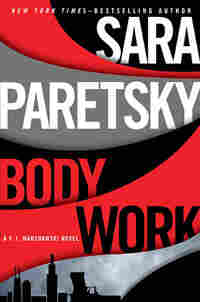 "I had not realized that I was slowing her down at my pace," she says. "So I thought, 'She's taking all these risks -- she jumps into sanitary canals, she's left for dead in ditches -- she's gotta be able to drink more than I do.' So in Body Work I really upped her drinking levels."

Apart from the drinking, Body Work also boasts some hilariously complicated scenes. In one episode, Warshawski brings a posse of two Iraq veterans, an impulsive niece, a downstairs neighbor and a dog to interview a witness in an urban walk-up apartment. Everyone ends up contributing to getting her to the witness in comically unexpected ways.

Paretsky says scenes like that usually aren't carefully planned. She says she doesn't like working from outlines, preferring instead to let the plot flow organically from the book's starting point.

"What I start with very often is the idea of a crime," she says. "In this case, the actual underlying crime that drives the whole book ... [is] the world of the private contractors doing business in the Middle East, in Iraq and in Afghanistan. And then I want a way to make that a small story. I want a way to make it about people and have it set in Chicago."

In Body Work, readers will find that Warshawski is still drinking, still fighting and still righting the wrongs of Chicago, though not always as gracefully as one would expect of this hard-nosed heroine. Her latest victory is mostly accidental and, frankly, a bit gross.

"She'll take her victories any way she can," Paretsky says. It's all just part of this PI's charm.

Nadia Guaman died in my arms. Seconds after I left Club Gouge, I heard gunshots, screams, squealing tires, from the alley behind the building. I ran across the parking lot, slipping on gravel and ruts, and found Nadia crumpled on the dirty ice. Blood was flowing from her chest in a thick tide.

I ripped off my scarf and opened her coat. The wound was high in her chest -- too high, I knew that -- but I still made a pad of my scarf and pressed it against her. Keeping pressure on the pad, I struggled out of my coat and placed it under her. Left hand on chest, right hand underneath, pushing my coat against the exit wound. Without looking up or stopping the pressure, I shouted at the people surging around us to call 911, now, at once.

Nadia's eyes flickered open as I cradled her. The ghost of a smile flickered at the sides of her wide mouth. "Alley. Alley."

"Shhh, Nadia, save your strength."

I thought it was a good sign, a hopeful sign, that she spoke, and I kept pushing against her wound, singing snatches of a cradle song, trying to keep us both calm. When the paramedics arrived, and pried my hands free from her wounds, they shook their heads. She'd been dead for several minutes already.

I started to shiver. It was only when the medics forced me to my feet that I felt the January wind cut into my bones. The medics brought me into the ambulance but left Nadia lying on the ground, waiting for a tech team to photograph her. The crew wrapped a blanket around me and gave me hot sweet coffee from their own thermos.

"You did the best that could be done. No one could have done more." The tech was short and muscular, with wiry red hair. "She was bleeding out within minutes of being shot. I'm guessing the bullet nicked a major vein, but the ME will tell us more. Was she a friend?"

I shook my head. We'd barely spoken, and at that point, in fact, I only knew her first name.

A cop poked his head through the open ambulance door. "You the gal that put her coat on the dead girl?"

Dead woman, I started to say, but I was too exhausted to fight that battle tonight. Nadia was dead, and whatever one called her, it wouldn't bring her back to life. I didn't move from the bench facing the stretcher but croaked out a yes.

"Can we talk inside, ma'am?" the cop said. "The EMTs are going to take the dead girl to the morgue as soon as the photo team is through, and it's five degrees here in the parking lot."

I handed the blanket back to the ambulance crew and let the cop give me a hand as I jumped off the back. Nadia was lying where I'd left her, her face silver under the blue strobes, the blood on her chest black. My coat was still underneath her. I walked over and fished my car and house keys from the pockets, despite outcries from the evidence team.

My handbag was lying a few feet from the "dead woman," I muttered out loud. I picked up the bag, also against the outraged shouts of the officer in charge.

"It's my handbag, which I dropped when I was performing first aid. You don't need it and I do." I turned on my heel and walked back into the Club Gouge. The bag was handmade from red leather, an apology of sorts from the friend of a dead missing person, and I wasn't going to risk losing it or my wallet in an evidence locker.

Everyone who'd been in the club or the parking lot, except those crafty enough to escape ahead of the team in blue, had been herded into the building. A minute before, I'd been too cold, but the club atmosphere, hot, nearly airless, made me ill. I started to sweat, and fought a rising tide of nausea.

The club staff, including my cousin Petra, were huddled by the bar. After a moment, when I decided I wasn't going to vomit, I shoved my way through the crowd to Petra's side.

"Vic, what happened?" Petra's blue eyes were wide with fear. "You're covered with blood."

I looked down and saw Nadia's blood on my jeans and sweater, on my hands. My scalp crawled: maybe her blood was in my hair.

"Someone shot a woman as she left the club," I said.

"I heard her called ‘Nadia,'" I said slowly, fixing Petra with a hard stare. "I don't know if that's her name, and I don't know her last name. If the cops, or a reporter, ask you questions about what happened tonight, you can answer only truthfully about things you actually know and saw. You shouldn't answer questions about things that are just guesses, because that could mislead the cops."

"It would be best if you don't consult the other witnesses," a voice said.

A female officer had fought through the shouting, texting, Twittering chaos to appear at my side.

Under the club lights, I could see her face, narrow, with pronounced cheekbones, and lank black hair cut so short the ends only just appeared below her cap rim. I read her badge: E. Milkova. E. Milkova didn't look much older than my cousin, too young to be a cop, too young to be telling me what to do. But -- she had the badge. I let her guide me to the small stage at the back of the club, which the police had roped off with crime scene tape so they could use it for interrogations. She lifted the tape so I could crawl under, then dragged a couple of chairs from the nearest table. I reached a hand out and took one of them from her.

I was in that numb place you inhabit after you've been part of violence and death. It was hard to focus on Milkova's questions. I gave her my name. I told her I'd heard gunshots and run to see what the problem was. I told her I didn't know the dead woman.

"But you knew her name," Milkova said.

"That was just from hearing someone call her ‘Nadia.' I don't know her last name."

"Most people run away from gunshots."

I didn't say anything.

"You ran toward them."

I still didn't say anything, and she frowned at me. "Why?"

"Why did you run toward danger?"

When I was younger and more insouciant, I would have quoted the great Philip Marlowe and said, "Trouble is my business," but tonight I was cold and apprehensive. "I don't know."