Accessibility links
In Praise Of Ichiro: Out Of Fashion, But On Base In baseball, much is made of milestones and big hits. But Ichiro Suzuki's consistency at the plate deserves praise. Since arriving from Japan nearly 10 years ago, the 36-year-old Seattle Mariners fielder has gotten hits at a pace matched only by Pete Rose. 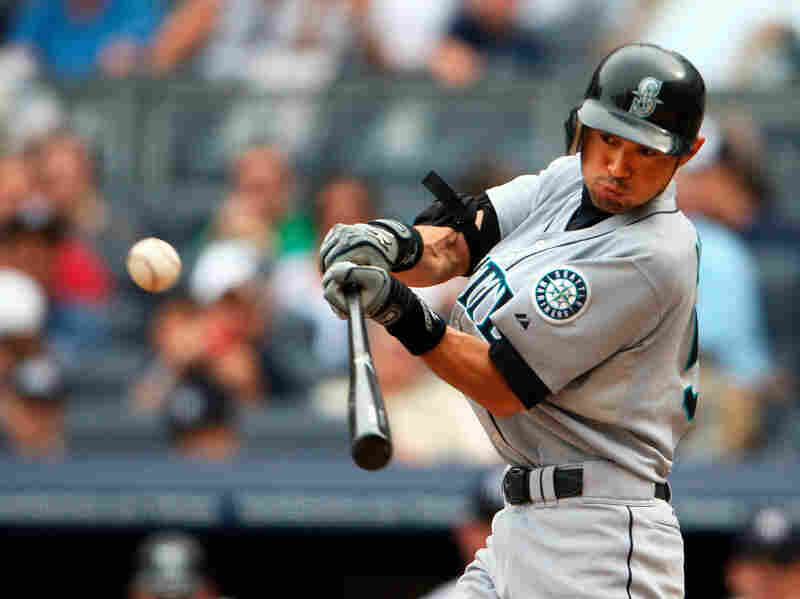 Applying Wood To Leather: Ichiro Suzuki prepares to guide the ball through the defense for another hit. This ball went for a single in a game against the Yankees in August. Andrew Burton/Getty Images hide caption 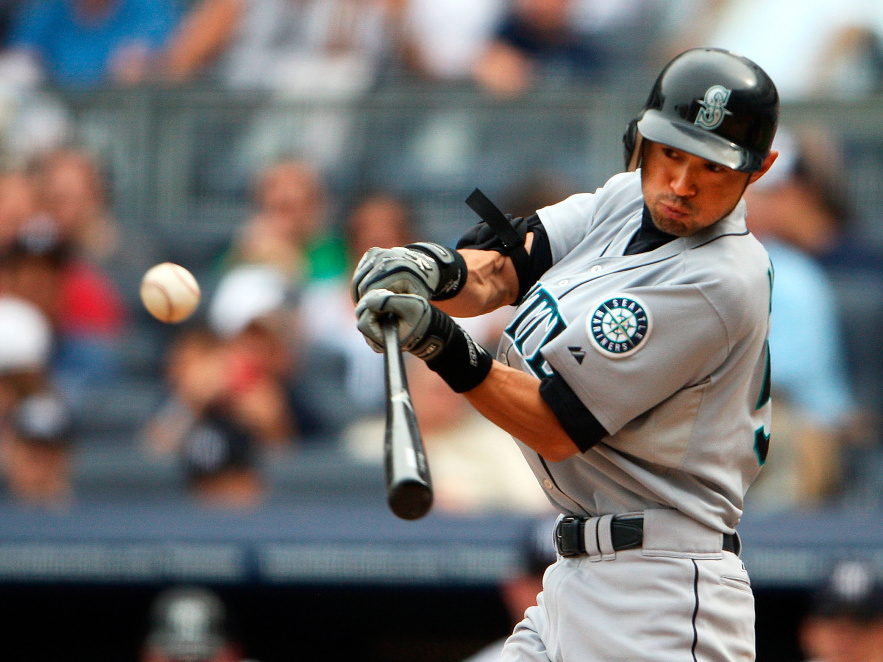 Applying Wood To Leather: Ichiro Suzuki prepares to guide the ball through the defense for another hit. This ball went for a single in a game against the Yankees in August.

We usually wait for milestones to salute excellence -- but every now and then, it's worth just pausing to admire some athlete who is unique, who does something spectacular, but does it day after week after year. So, like that, may we now sing the praises of Ichiro Suzuki, as he completes his 10th season in American baseball.

No, it is not as if Ichiro is ignored, unsung. He's not only been an MVP, but he's made the All-Star team every season, and he holds the major league record with nine straight 200-hit seasons. But then, Ichiro is on a losing team in Seattle, he hasn't appeared in the postseason in nine years -- and he plays out there, up there, in what most of the media consider Baja Yukon.

The fact is, though, that Ichiro is probably better at the task of putting a bat on a pitched ball than anyone -- ever -- in history. Only, at a time when first home runs and then pitching have been fashionable, what he does is like singing Gilbert and Sullivan when everybody is listening to rock.

If he were a basketball player, Ichiro would be shooting set shots. If he were a football player, he would be drop-kicking. Ichiro just brings the bat around, raises his leg and pivots in his peculiar fashion -- and then he makes contact and sends the ball to an empty place.

He has 2,200 hits in our major leagues. He made 1,400 hits in the Japanese majors. In case you want to suggest that he feasted on weak pitching over there, well, Ichiro actually averages more hits per game here than he did in Japan. He just hits pitchers. Ichiro makes a little more than 1.3 hits a game -- whoever is pitching, wherever, whatever time of day.

And of course, Ichiro is a significant cultural figure. As the first Japanese position player and the first big star to jump to the U.S., he opened up the American game to Asians, made our national pastime truly worldwide -- even if he can't ever get into a World Series himself.

Our provincial Hall of Fame does not recognize Japanese baseball stars, like Sadaharu Oh, the home run champion. But they can't keep Ichiro out of Cooperstown.

No, maybe he's not the best player of his era -- but, then, he may do better at what he does best than any other athlete of his time. And he made an international difference. So today, simply: Arigato, Ichiro-san.