Accessibility links
Someday, This Raven May Fly To The Rescue The owner of a special raven named Shade is on a mission to train the bird to help rescue lost hikers and tourists in the Arizona backcountry. Shade has an uncanny ability to play hide-and-seek and to understand verbal commands.

Listen
Someday, This Raven May Fly To The Rescue 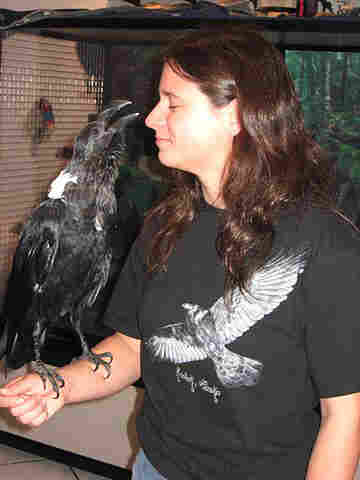 Emily Cory is training her pet raven, Shade, to find lost hikers or tourists in the Arizona backcountry. Shade is already an expert at hide-and-seek and has an uncanny ability to understand verbal commands. Daniel Kraker for NPR hide caption

A couple of years ago, Emily Cory had an epiphany. She worked with raptors and owls at the Arizona-Sonora Desert Museum. But she was fascinated by the one common raven there.

"She'd play horrible tricks on the volunteers, she'd get in so much trouble. She never forgot a thing, never missed a thing [and] that really got my attention," Cory says.

Cory began to realize just how smart this raven seemed to be. At the same time, she thought about her childhood in Sedona, where she used to watch helicopters from her house searching for lost hikers.

"I started thinking, 'Well how come nobody's put these two together?' Because clearly birds are easy to train -- falconers have been training them for thousands of years. And ravens are super intelligent," she says.

So she bought a raven and named it Shade. Her goal was to eventually use the bird to help rescue tourists lost in the Grand Canyon or in the rough Arizona desert. Shade quickly learned to play difficult games of hide-and-seek with one of her favorite objects -- a wooden blue star.

"And soon she was finding that blue star no matter where I hid it," Cory says. "She was looking in places I didn't even think of hiding it, that really were very good hiding spots."

To demonstrate, Cory hides a tube of Chapstick under a pillow. But Shade is distracted by my microphone. The bird cocks her head to the side to get a better look.

"I know, it's too scary. She thinks that we're up to something," Cory says.

A St. Bernard With Wings

Cory's plan was to bring Shade outside and teach her to spot people in the backcountry. Then, Cory would work with her to fly back and forth between the hiker and the trainer with a GPS tracker attached to her foot.

Cory was also writing her master's thesis on the project. Despite the progress she was making training Shade, her plan hit a snag because no one would support her research.

"I actually got laughed out of a couple of professor offices," Cory recalls. "They would say, 'That's nice, but let me introduce you to reality -- you cannot train ravens.' "

But the training revealed something else: Shade could seemingly understand verbal commands.

"Sometimes she responds correctly even when my back is to her," Cory says. "For example, she loves Chapstick. She always steals Chapstick."

The second Cory says the word "Chapstick," Shade flies away, flips over the pillow and retrieves the tube of Chapstick.

"See, she heard me say 'Chapstick' and she picks up a Chapstick," Cory says.

Back To School With A Mission

Earlier in August, Cory finally started a Ph.D. program at the University of Arizona in animal behavior science.

She's going to start by studying ravens and language.

But ultimately, she's hoping to find a way to put the bird to practical use -- searching for lost hikers in the backcountry.