Accessibility links
Obama Turns Page On Iraq, But Story Isn't Over As he ended the combat mission in Iraq, President Obama called on the American people to put the energies once devoted there into the fighting in Afghanistan and the rebuilding of the U.S. economy. But he also foreshadowed what analysts say will be a difficult and dangerous job of training Iraqi forces to maintain their country's security.

Obama Turns Page On Iraq, But Story Isn't Over

Obama Turns Page On Iraq, But Story Isn't Over 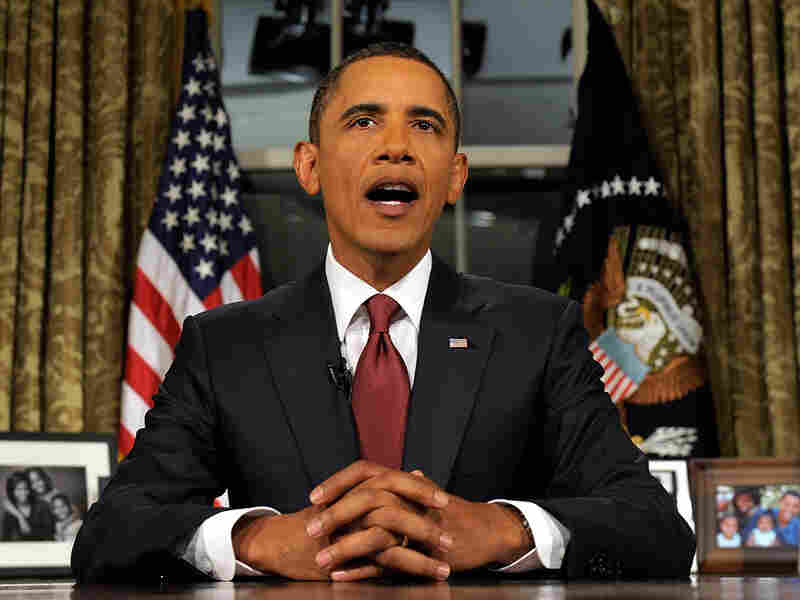 In this video image, President Obama speaks to the nation from the Oval Office about the end of the U.S. combat role in Iraq. APTN hide caption 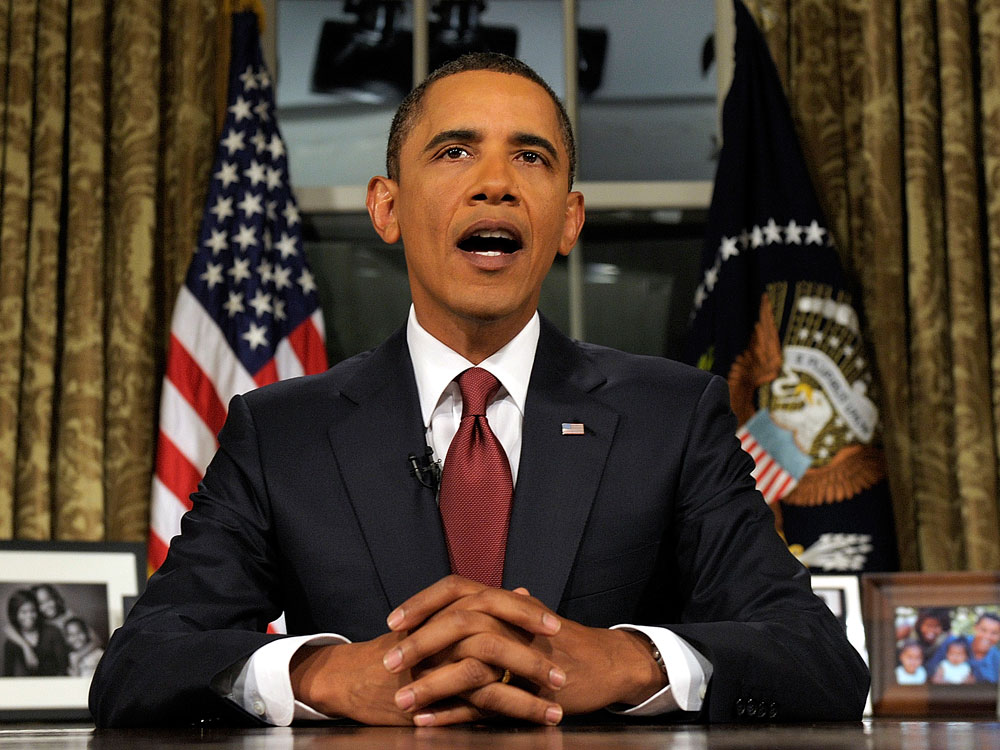 In this video image, President Obama speaks to the nation from the Oval Office about the end of the U.S. combat role in Iraq.

President Obama has drawn an official end to U.S. combat operations in Iraq, but challenges lie ahead in a country that faces persistent insurgent violence and political turmoil.

In a prime-time address Tuesday night, the president called on the American people to put the energies that were devoted to Iraq into the widening fight in Afghanistan and the need to rebuild the U.S. economy.

But Obama also foreshadowed what analysts say will be a difficult and dangerous job of training Iraqi forces to maintain their own country's security. And he reminded Iraqi leaders that the U.S. commitment to Iraq will continue, but that they must stop factional bickering and form a government.

TWO-WAY BLOG: Comments On The Speech

The president began his speech by acknowledging problems at home, "a time of great uncertainty for many Americans. We have now been through nearly a decade of war. We have endured a long and painful recession," making a future of peace and prosperity "seem beyond our reach."

He also recalled the repeated setbacks that marked the 7 1/2-year war in Iraq: "A war to disarm a state became a fight against an insurgency. Terrorism and sectarian warfare threatened to tear Iraq apart. Thousands of Americans gave their lives; tens of thousands have been wounded. Our relations abroad were strained. Our unity at home was tested."

Obama was a sharp critic of the war, and war critics were hoping that this speech would mark a beginning of toting up the true costs of the conflict. Brian Katulis, a senior fellow at the Center for American Progress, said earlier, "I think it's important to remind the American people -- diplomatically -- that the Iraq war has been a negative for U.S. national security."

But Obama didn't do that, and, in fact, he made conciliatory references to his predecessor.

Obama noted that he was speaking from the desk where former President George W. Bush announced the beginning of combat operations, and some of his comments seemed to be echoes from Bush's history.

Although he didn't refer to Bush's "Mission Accomplished" speech in May of 2003 -- a message that proved premature -- he did note that "the Americans who have served in Iraq completed every mission they were given."

Later in the speech, the president mentioned that he had called his predecessor. "It's well-known that he and I disagreed about the war from its outset. Yet no one could doubt President Bush's support for our troops, or his love of country and commitment to our security."

As combat operations come to a close, Obama said, it is also time to end the division the war has caused among Americans. "Here, too, it is time to turn the page," he said. 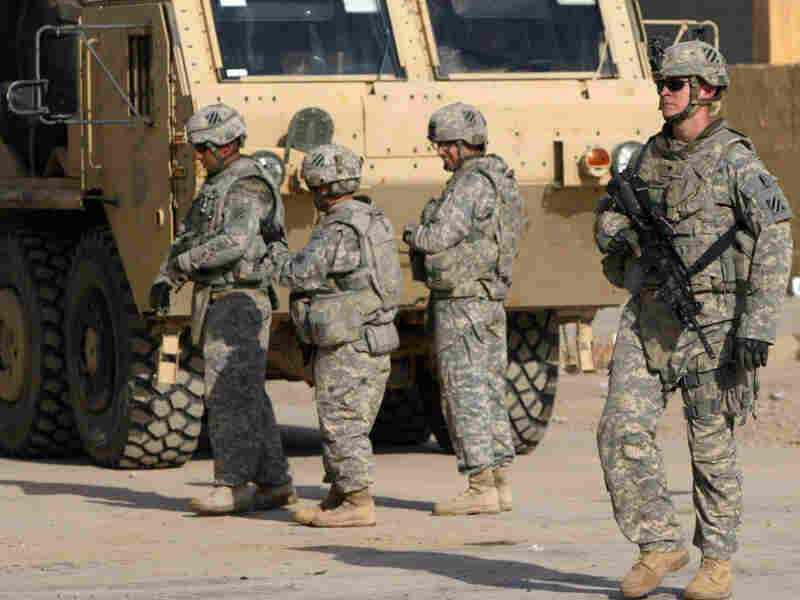 U.S. troops patrol in the Iraqi city of Kirkuk on Aug. 26. They will remain after President Obama declares the end of the U.S. combat mission in Iraq. Marwan Ibrahim/AFP/Getty Images hide caption 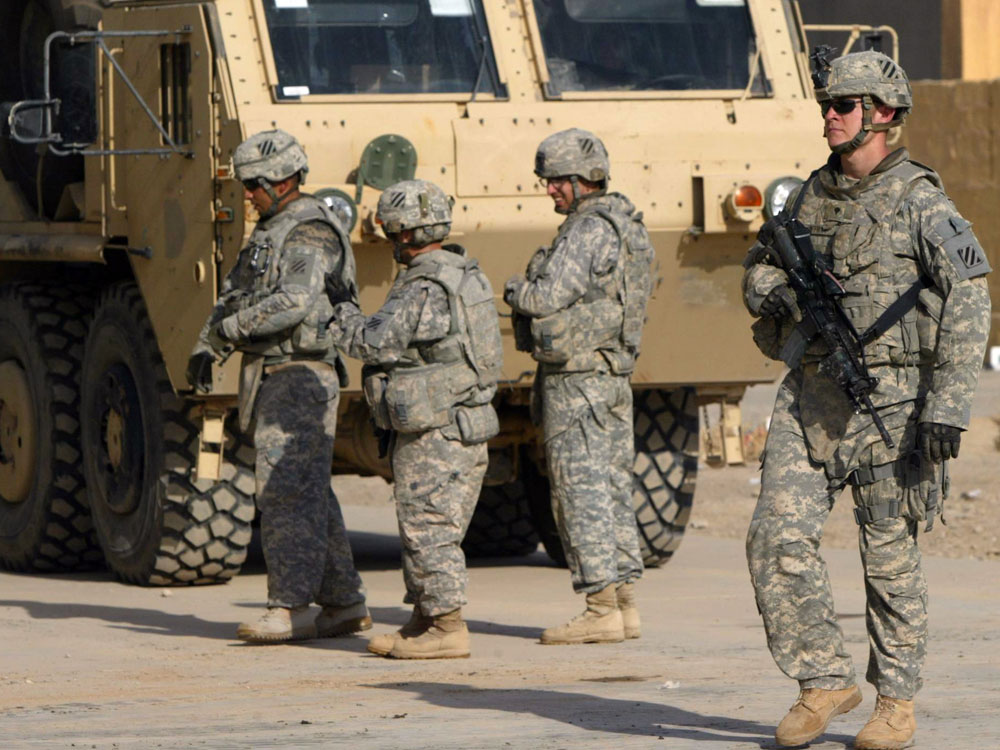 U.S. troops patrol in the Iraqi city of Kirkuk on Aug. 26. They will remain after President Obama declares the end of the U.S. combat mission in Iraq.

As he announced the end of Operation Iraqi Freedom, Obama sought to rekindle support for the war in Afghanistan. "As we approach our 10th year of combat in Afghanistan, there are those who are understandably asking tough questions about our mission there," he said.

"But we must never lose sight of what's at stake," he added. "As we speak, al-Qaida continues to plot against us."

Obama said the drawdown in Iraq will enable the United States to "apply the resources necessary to go on offense" and to "disrupt, dismantle and defeat al-Qaida."

He also called on Americans to imitate the "energy, and grit, and sense of common purpose" of U.S. troops in tackling economic challenges at home. "Our most urgent task is to restore our economy and put millions of Americans who have lost their jobs back to work."

Before the speech, many commentators forecast that the president would focus strongly on thanking the troops, and he did. He promised to maintain America's military strength, "the steel in our ship of state," and he vowed to protect and provide for America's veterans.

A Question Of Politics

The Facts: U.S. Presence In Iraq

One question that was raised before the speech was how the president would deal with Iraq's political turmoil, including the fact that rival factions have been unable to form a government seven months after national elections.

The answer was that he kept it short. He called Iraq's elections "credible" and noted that there is a caretaker administration in place while Iraqis try to form a government. And he encouraged Iraq's leaders to get going -- with "a sense of urgency."

Vice President Biden, in Iraq for Wednesday's military handover ceremony, is expected to push the political leaders far harder behind the scenes.

Obama sought to reassure Iraqis that the U.S. will remain committed to them, but he held that pledge out almost as a carrot in return for forming a government. "And when that government is in place, there should be no doubt: The Iraqi people will have a strong partner in the United States. Our combat mission is ending, but our commitment to Iraq's future is not."

That, says Raed Jarrar, is more important to Iraqis than the deadline for withdrawing combat troops. Jarrar, an Iraq consultant to the American Friends Service Committee, says Iraqis are much more fixated on Dec. 31, 2011.

That's the date set by the bilateral agreement between the U.S. and Iraq during the Bush administration, which specifies that all U.S. troops and all Pentagon contractors leave Iraq and that all U.S. bases be closed or turned over.

Beyond that point, Jarrar says many Iraqis fear that the U.S. will abandon them during the long task of reconstruction. "What I would love to see," he says, "is a commitment for the U.S. to stay engaged in Iraq in the long run, even after the last U.S. soldier leaves."

Obama said the nearly 50,000 troops who will remain in Iraq for the next year or so will have a different but dangerous mission. "Extremists will continue to set off bombs, attack Iraqi civilians and try to spark sectarian strife."

And he noted that American civilians -- "diplomats, aid workers and advisers" -- will take the lead in many of the reconstruction missions that remain.

The problem of keeping Iraq secure without American combat troops will be a tricky one. Yochi Dreazen, a defense correspondent for The National Journal, says the best case for the U.S. troops remaining would be if they could remain largely invisible to Iraqis, serving only in support roles.

But the worst case, Dreazen says, would be if Iraqi troops are unwilling or unable to fight without American support and supervision.

Although U.S. military officials in Iraq have touted the readiness and capability of Iraqi forces, Dreazen says they have some real drawbacks when it comes to larger-scale missions, the logistics of moving their troops and keeping them supplied, and using air power.