Accessibility links
I-95 A 'Trap' For Migrant Fruit Pickers When the growing season ends in the North, migrant farm workers along the East Coast will head south, often on Interstate 95, in search of work. For the undocumented workers who make up the majority of that labor pool, the journey can be harrowing. 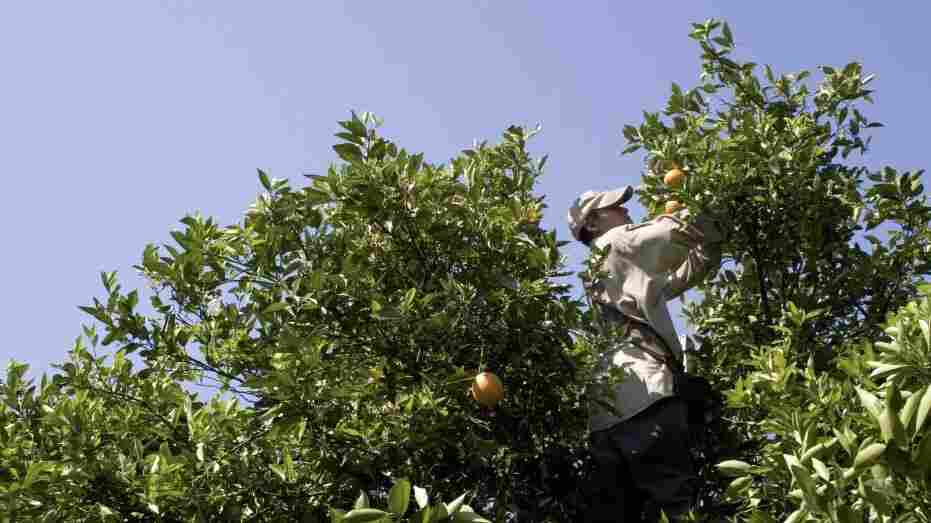 Look closely at the traffic on Interstate 95, between the tractor-trailers and the vacationing families piled into minivans, and you might see them: migrant farm workers, following the growing season from state to state. When the season ends in the North, those workers along the East Coast will head south in search of work.

For the undocumented workers who make up the majority of that labor pool, the journey can be harrowing. Just ask Ramiro, a migrant worker on a tomato farm in New Jersey. "Last year, we almost had an accident," he says. "Thanks to God we didn't, but we came close."

Ramiro was riding in a van with other undocumented workers on I-95 in Maryland when another car swerved into their lane. Ramiro's van wound up on the side of the road, and the police came to investigate. He was afraid of being deported.

"We definitely were scared. It stays stuck in your mind," he says.

"They just move and hope they will not be detained, stopped or anything like that. So that's the risk that they're taking," says Nelson Carrasquillo, the general coordinator of CATA, a support group for agricultural workers in New Jersey and Pennsylvania.

Carrasquillo says migrant workers try to keep a low profile, traveling with friends and labor contractors in cars and unmarked vans. They generally avoid buses for fear of running into immigration checkpoints.

"The 95 corridor -- the traditional way of moving for them -- has become kind of a trap," Carrasquillo says.

A Change Along The Way

Greg Schell, an attorney at the Migrant Farmworker Justice Project in Florida, estimates that more than 100,000 farm workers commute up and down the I-95 corridor every year.

"When the Florida harvest ends and the workers need to get to North Carolina, the fastest way there is to get on the interstate," he says. "Likewise, when they finish in the Carolinas and need to get to Pennsylvania or New Jersey, Interstate 95 or other interstates are the highway of choice."

Migrant workers have been traveling up and down the East Coast since well before the days of I-95. Farmers depend on cheap, flexible labor to pick fragile crops like tomatoes, peaches, blueberries and more.

In the 1960s, the workers were mostly American citizens. University of Delaware professor Mark Miller says the migrant workforce has changed dramatically since he began studying it 30 years ago. "There, still at that juncture, was a prevalence of African-American migrant workers from Florida. Today, the composition is very different. There's been a 'Hispanization' of the agricultural workforce," he says.

African-Americans have largely moved on to jobs with better pay and working conditions, Miller says. Back on the New Jersey tomato farm, Ramiro says he, too, would like to settle down.

"I've been thinking about it," he says. "Work's going to be finishing up pretty soon. I would like to stay here, but I don't know what else to do."

Without documentation, Ramiro says, it's difficult to find work in the off-season. So in October, he'll probably head back down I-95 to Florida and take his chances.