Accessibility links
Evolving Culture: Where Do We Go From Here? Humans are still evolving, but cultural evolution is far outpacing genetic evolution. Our environment and technology are changing so rapidly that genetic adaptations can't keep up. So we're adapting by learning new things and passing that knowledge onto the next generation. 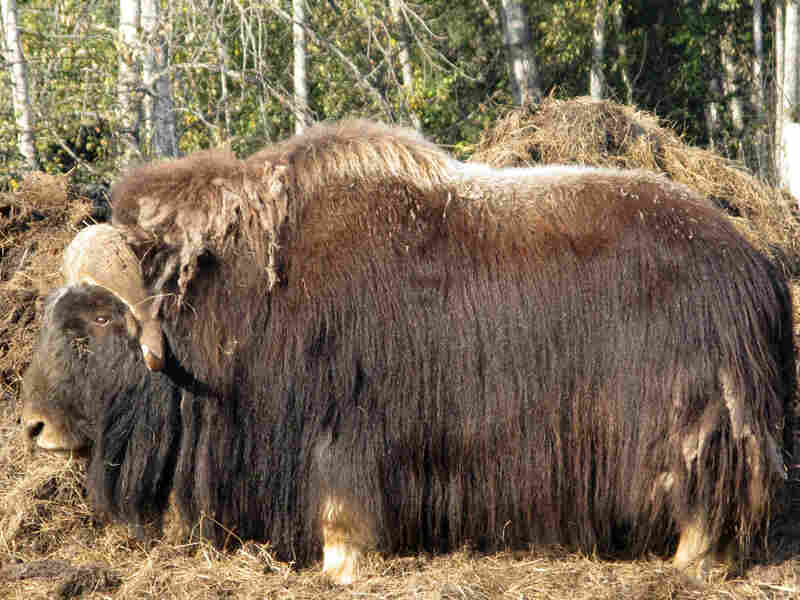 Hide And Seek? A male musk ox stands in a paddock at the Large Animal Research Station in Fairbanks, Alaska. The musk ox is genetically adapted to survive the harsh climate. Its long hair skirt, covering a fine wool coat and a 2-inch layer of fat, allows the animal to retain heat during the long, lean winters. All animals, except humans, adapt to climate by changing genetically. Jane Greenhalgh/NPR hide caption 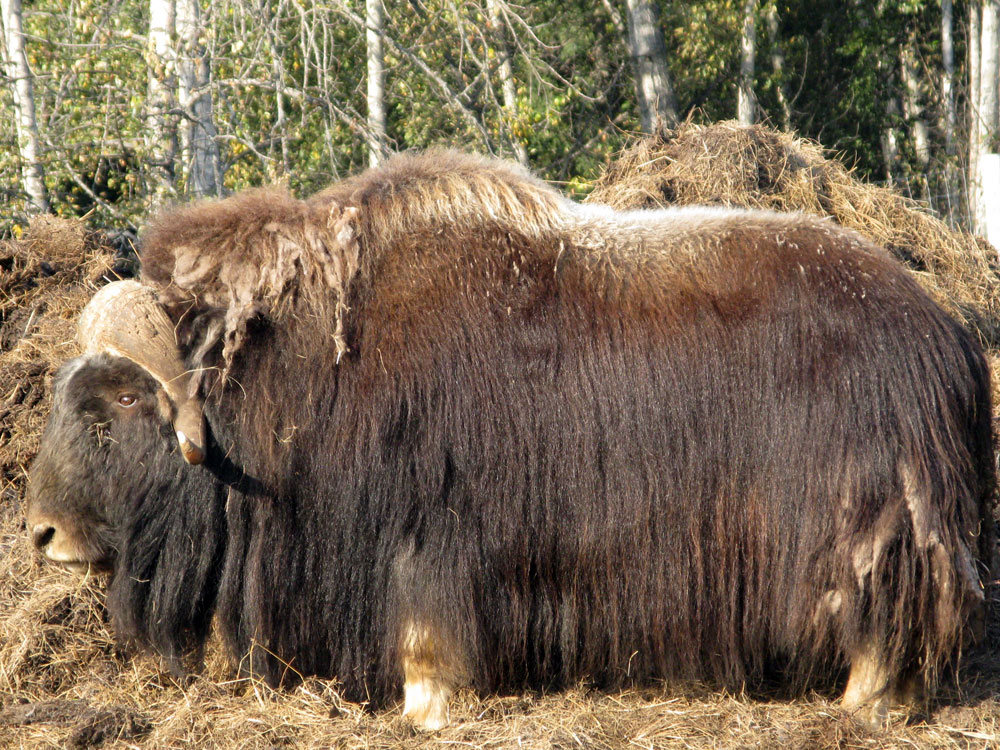 Hide And Seek? A male musk ox stands in a paddock at the Large Animal Research Station in Fairbanks, Alaska. The musk ox is genetically adapted to survive the harsh climate. Its long hair skirt, covering a fine wool coat and a 2-inch layer of fat, allows the animal to retain heat during the long, lean winters. All animals, except humans, adapt to climate by changing genetically.

For billions of years, the environment and how it affected organisms' genes was the key to evolution. But in the past 10,000 years, for humans at least, genetic evolution has been nudged aside by something more powerful.

"What we are able to do which other animals aren't able to do is to rapidly adapt to completely new environments," says Robert Boyd, an anthropologist at the University of California, Los Angeles. "Most animals -- all animals except humans -- would have to adapt to that by changing genetically."

Humans Adapt With Their Wits

Think about it. Let's say you want to live in Fairbanks, Alaska. If you're a musk ox, you can't build a shelter or buy insulations, so you make your own.

"They have a very, very superfine sort of wool that's underneath a long skirt of hair," says biologist Perry Barboza, director of the Large Animal Research Station, a part of the University of Alaska, Fairbanks. "That provides an enormous amount of insulation. And on top of that, or beneath that, they have about 2 inches fat as well."

But musk ox can only survive in one kind of environment. Transport them to the desert, and they die within days because they don't have the physiology to get rid of excess heat.

Humans can live anywhere they like: in Fairbanks, where the winters get to 40 below zero, or Dubai, where the summers are routinely 100 and above. The reason is we don't have to make genetic adaptations to our environments in order to survive.

Native Alaskan cultures created incredibly innovative tools and techniques to enable survival in the frozen, inhospitable climate. Click through the photos below to see some of the clothing and tools that gave them a uniquely Human Edge.

"You could say that one of the most important tools for [humans] surviving in the north is the needle," says Aron Crowell, who is Alaska Director of the Smithsonian's Arctic Studies Center. The earliest humans used those needles to sew warm, waterproof clothing: fur jackets, sealskin boots and waterproof parkas.

Eskimos don't have a gene that tells them how to make a parka. That ability comes from cultural knowledge passed from generation to generation. Sure, we needed to evolve a brain that could conceive of the idea of using seal intestines to make a waterproof parka, but Boyd says having a big brain is just the start.

"It's easy to see that it's not individual intelligence that makes us so good at adapting," he says. "It's an important component, but we also need the ability to accumulate knowledge gradually over a whole population of people over hundreds or maybe even thousands of years."

The Franklin Expedition in the mid-1800s exemplifies this concept well, Boyd says. On May 19, 1845, two ships set out from England in search of the Northwest Passage through the Arctic. Neither returned. Almost 15 years later, a search party found a single sheet of paper left in a tin can covered by stones on King William Island in the Canadian Arctic.

28 of May 1847 … Having wintered in 1846-7 at Beechey Island … after having ascended Wellington Channel and returned by the West side of Cornwallis Island. Sir John Franklin commanding the Expedition. All well.

But scribbled in the margins of the paper was a more ominous note.

Sir John Franklin died on the 11th June, 1847, and the total loss by deaths in the Expedition has been to this date 9 officers & 15 men.

In the end, all perished, but not before the starving crew apparently resorted to cannibalism. Boyd says the irony is that there were Canadian Eskimos living near where the ships became frozen in the ice, and the Eskimos survived the harsh winter just fine.

"The difference was the English sailors didn't have the knowledge to live in the Arctic, and they couldn't figure it out on their own," he says.

For the past 10,000 years, it's been cultural changes that have shaped how humans have evolved and coped with their environments -- not genetic changes.

And just as geneticists have been looking at ancient DNA to see how new genes emerged and spread, anthropologists and archaeologists are trying to do the same for the emergence and transmission of new skills.

Archaeologist Ben Potter of the University of Alaska, Fairbanks, spends a lot of time visiting ancient sites of human habitation throughout the state. He says you can think of them like a laboratory to understand how humans coped "when they're pushed to their limit, or when they are approaching an environment that they're not equipped for biologically."

Ten-thousand years ago, the latest development in arrowheads or stone microblades would be passed from parent to child or tribe to tribe. Now, the way cultural information is transmitted has changed dramatically. UCLA's Boyd says that today there are institutions whose whole function is to be engaged in cultural transmission.

"Schools, religious institutions and other kinds of associations -- and then there are things like NPR who transmit to zillions of people," he says.

There's a torrent of cultural knowledge flowing over us all the time, and we get to decide how to use that knowledge to shape our future.

"Where it's going to go? Your guess is as good as mine," he says.

Wherever it goes, if we don't like the outcome, we'll have only ourselves to blame.

This story was produced by Jane Greenhalgh.