Accessibility links
Four Days, Nights: A Girls' Coming-Of-Age Ceremony More than 90 girls have taken part in the Isnati coming-of-age ceremony on a reservation in South Dakota in the past 13 years. During the four-day ritual, the girls can't touch food or drink — they are fed by the women in the camp. They also talk with their elders about modesty, courtship, pregnancy and suicide before graduating to womanhood.

On a wide grassy bank of the Missouri River on the Yankton Sioux/Ihanktonwan Oyate Reservation in South Dakota, Brook Spotted Eagle stands watching five young girls raise a tepee. It's early August, and the girls are taking part in a four-day coming-of-age ceremony revived in the 1990s by the Brave Heart Women's Society.

"I was part of the first group who went through this Isnati coming-of-age ceremony 13 years ago," Brook recalls. Brook's mother, Faith Spotted Eagle, is one of the women who re-established the Brave Hearts. With American and European contact, many such societies and ceremonies have been lost in the past 100 years. In 1994, Faith and the Brave Hearts interviewed grandmas from three states about what they remembered of the Isnati Awica Dowanpi coming-of-age ceremony.

"In the old days," Faith Spotted Eagle says, "as soon as a girl had her first moon, her menses, she would immediately be isolated from the rest of the camp and begin a four-day ceremony where she was taught by other women.  So we symbolically set up one camp a year and have the girls come in for four days."

In traditional Yankton Sioux culture, everyone had a niche, a role. One of the roles of the women who were part of the Brave Hearts was to retrieve the dead and wounded from the battlefield and help the families. "In a way we are doing the same thing today with the modern-day Brave Hearts," Faith Spotted Eagle says, "bringing back our people from emotional death."

Thunder cracks in the distance as the girls, dressed in long skirts and tank tops, unroll the canvas tepee. This is where they will sleep together, away from the rest of the camp. A group of grandmas and aunties yell instructions from the sideline: "A little to the north, to the north! Hurry up girls -- before the rain comes!"

At one time, all of this was underground. We only got the American Indian Freedom of Religion Act in the late '70s. So we had to stand our ground to have these things out in the open again.

"Most women's tepees have 13 poles because we have 13 moons in a year," explains Judy Drapeau, a grandmother who helps every year. "That's why we call it a moon camp because it's a special time for women to learn about themselves."

"The first thing you need to do is put up your own lodge -- you need to have that strength to house yourself," says Marissa Joseph, 21. Adopted at birth, Joseph spent a large part of her youth bouncing between relatives.

"Childhood was really rough -- lost and floating and drifting," she says. "By my early teens, I was a pretty strong alcoholic. I didn't know who I was and what I needed.  I really wanted to not live anymore. The summer of my 14th year I went through Isnati. I felt like I was found."

During the four days, the girls cannot touch food or drink. They are fed by their mothers and other women in the camp.

Marla Bull Bear, who has been through the ceremony with her daughter, says the feeding feels a little like heartbreak -- "that bittersweet feeling."

"It's treating them like a baby one last time before they become women," she says. "No longer would she be my little girl to feed anymore. You really begin to start the foundation of what that adult relationship is with a mother and daughter."

On the second day, the girls pile into the back of a pick-up truck to gather traditional herbs and medicines. Faith Spotted Eagle points out a little plant called "too proud," and yellow cornflowers, which have roots that when ground up are used to treat toothaches. The girls pick buffalo berries and armfuls of wildflowers and women's sage for the bouquets they'll carry at the womanhood ceremony.

A group of young boys keeps the fires in camp burning all day and all night. Men aren't allowed in the girl's camp, but young boys like Baby J are allowed. His job is to sing to the girls outside their tepee in the morning to wake them up. 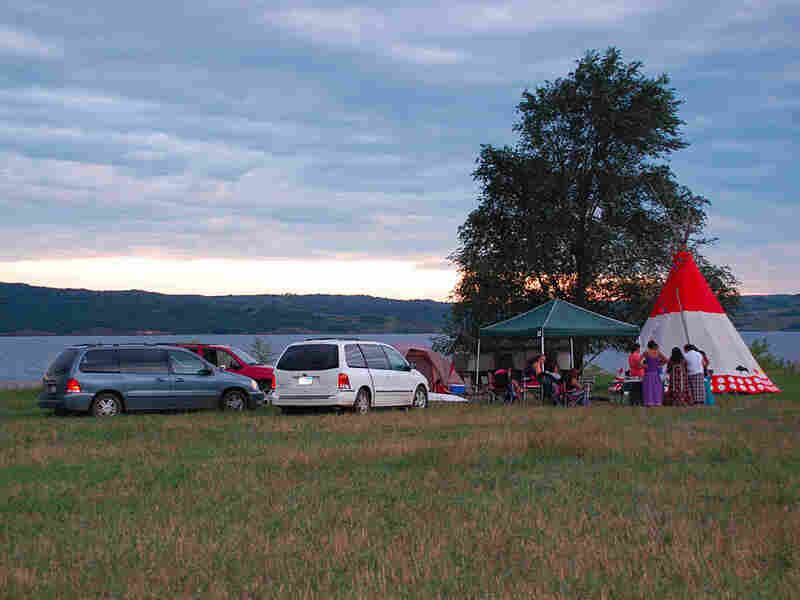 More than 90 girls have gone through the ceremony since it was revived 13 years ago by the Brave Heart Women's Society on the Yankton Sioux/Ihanktonwan Oyate reservation. Courtesy of Nikki Silva hide caption 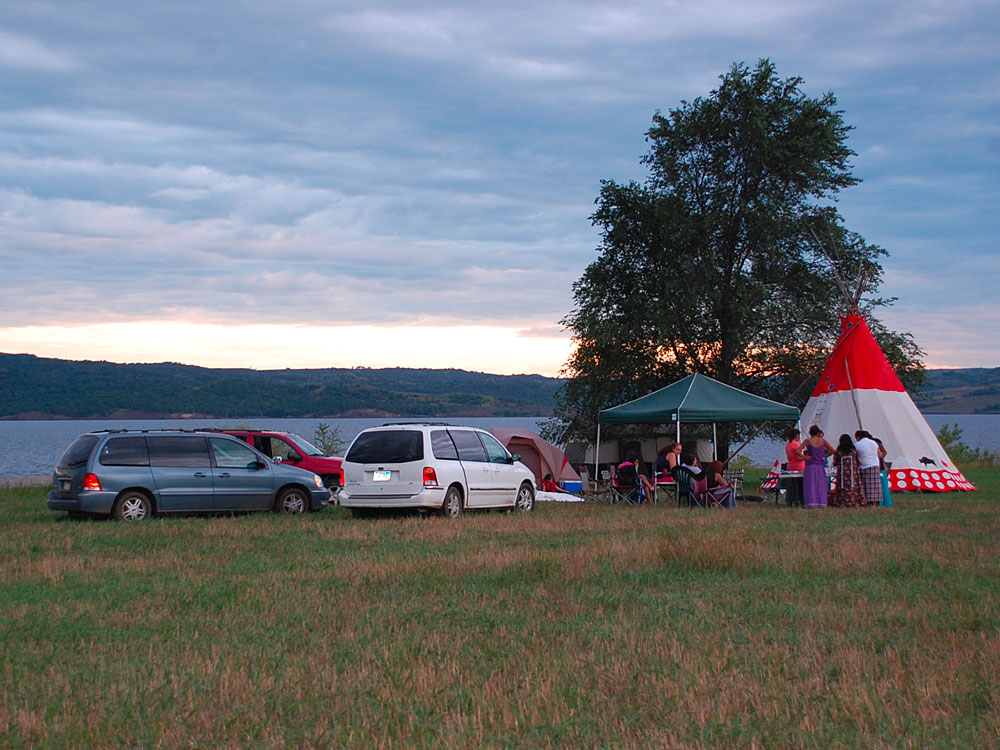 More than 90 girls have gone through the ceremony since it was revived 13 years ago by the Brave Heart Women's Society on the Yankton Sioux/Ihanktonwan Oyate reservation.

Teresa Heart, a Brave Heart grandmother, arrives in the afternoon and sizes up the girls. For the past 13 years, she's made the girls' ribbon dresses for the ceremony.

"I didn't have this when I became of age," she says. "Growing up at a boarding school, they came from the Bureau of Indian Affairs and they took us. I must have been 5. And I didn't see my mom and my grandparents for nine years. When I was older, they assigned me a little first-grader, and I had to teach her English. I'd braid her hair and take care of her. Then they'd switch everybody all around and I'd get another little girl. They wouldn't let us get close to each other."

Just before dusk, Marissa Joseph arrives to teach the girls how to make ceremonial food -- dried buffalo meat jerky with buffalo berries. "Every year I try to teach what I know, bring that back to re-create that feeling I felt," she says.  Older Isnati girls return year after year to feed the younger girls and teach them ceremonial songs and beading.

Throughout the days, the elders talk to the girls about modesty, courtship, pregnancy -- and suicide, a serious problem on the reservations. 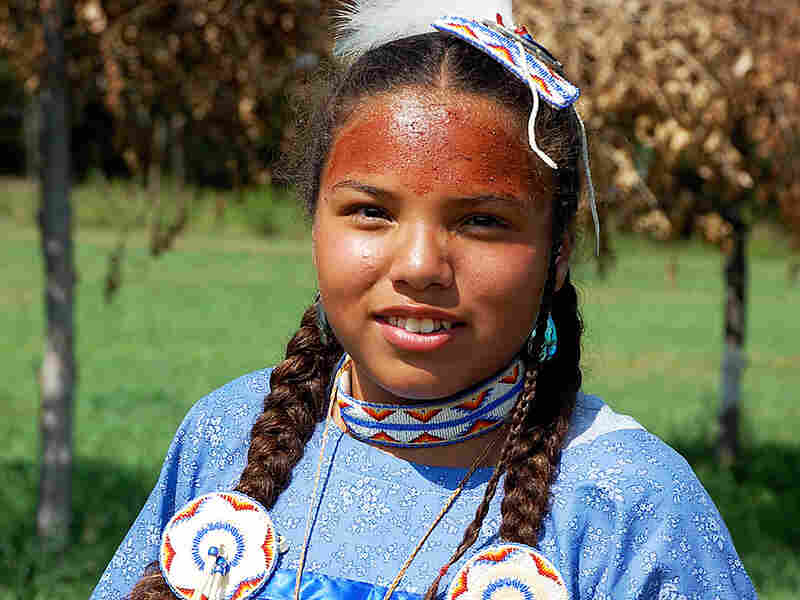 On the fourth and last day of the Isnati Awica Dowanpi coming-of-age ceremony, Brittany Poor Bear, 12, from Lake Andes, S.D., was presented to the Yankton Sioux community at the womanhood ceremony. Courtesy of Nikki Silva hide caption 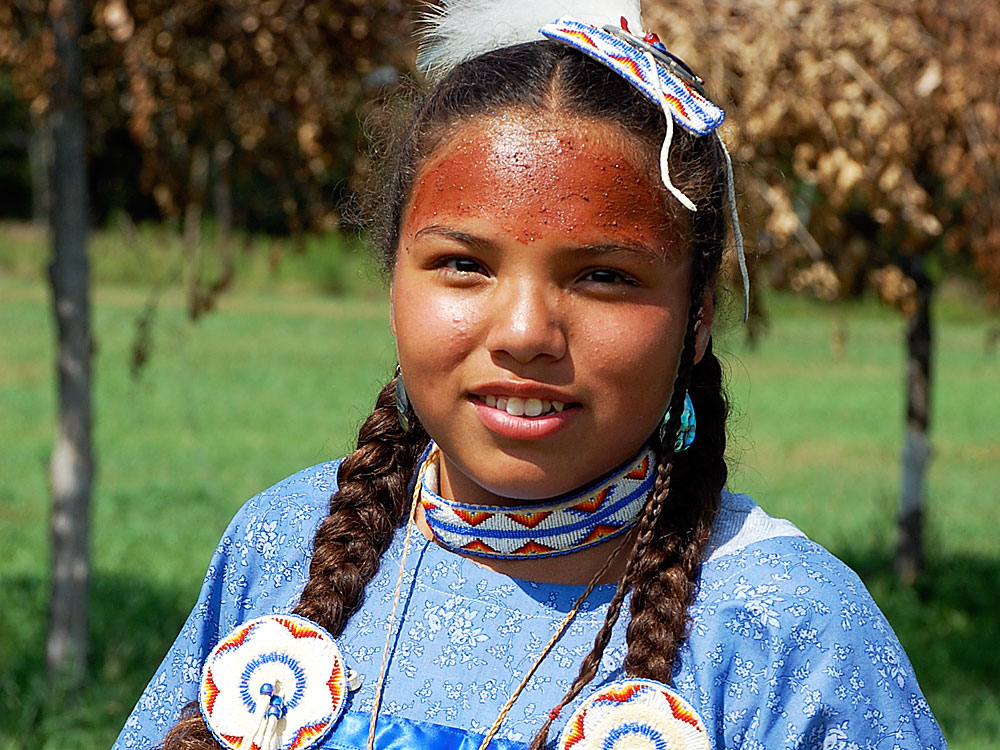 On the fourth and last day of the Isnati Awica Dowanpi coming-of-age ceremony, Brittany Poor Bear, 12, from Lake Andes, S.D., was presented to the Yankton Sioux community at the womanhood ceremony.

"At times, we have a nutritionist come in and talk to them about eating right and not just drinking Gatorade, about not being afraid of doctors and having to get a check-up," Brook Spotted Eagle says. "Sexual abuse and incest can pose a huge problem within families. There's no easy way to talk about these issues, so you just have to get them out there. And we're always talking about this concept of a camp circle. We can't be attacking each other and doing this mean girls stuff."

Madonna Thunderhawk, an activist and longtime American Indian Movement advocate, sits watching the girls as they learn how to bead their small leather medicine bags. "As a grandmother and great-grandmother, I just wanted to come and spend a few hours," she says. "This is part of what I need to do.  At one time, all of this was underground. We only got the American Indian Freedom of Religion Act in the late '70s. So we had to stand our ground to have these things out in the open again."

On the last day, each girl spends time with her mother or an auntie in the tepee. The older woman bathes the girl in sage water and talks to her about her birth, her young days -- and her future. Kiari World Turner says her mother washed her hair and told her stories about when she was a little girl: "Good stories. I guess we found each other."

In the late afternoon, dressed in their ribbon dresses, moccasins and beaded regalia, the girls are introduced to the community as women and members of the Brave Heart Women's Society.

More than 90 girls have taken part in the Isnati ceremony in the Ihanktonwan territory over the past 13 years.

"When I went through Isnati, my grandmother gave me the name Gray Eagle Woman," remembers Marissa. "My sister's name is Stand Strong Woman. She's the baby girl, and she's lived a hard life as well, and she's been able to stand strong. It only seems fitting that you would change your name with where you are in your life. The Brave Heart Society, these grandmothers, this connection with these girls I've made. This is my sixth year into it. I'm like a 6-year-old trying to live a new life. I'm still pretty new to a lot of things."