Accessibility links
'Recovery Summer' Ends With Economic Pothole This was supposed to be the season the economy heated up, thanks to a wave of public works projects funded by the government's stimulus program. But summer is coming to an end and the recovery has not taken root. Forecasters are expecting another gloomy employment report on Friday. 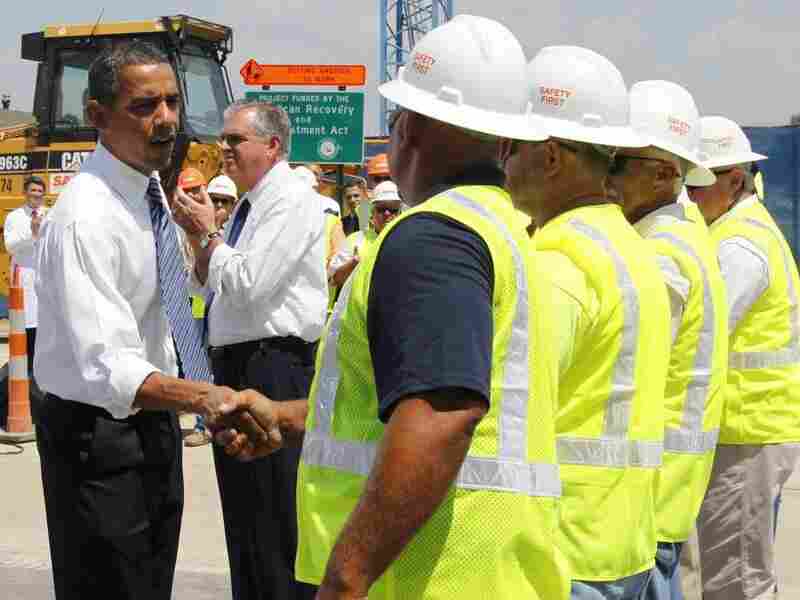 Whatever happened to recovery summer?

This was supposed to be the season the economy heated up, thanks to a wave of public works projects, funded by the government's stimulus program. But summer is coming to an end, and the recovery has not taken root. (The Labor Department on Friday reported a slight rise in the unemployment rate to 9.6 percent in August as more people were looking for work.)

And before long, stimulus dollars will be fading like autumn leaves.

None of that is encouraging for President Obama, who launched the summer with a crew in hard hats in Columbus, Ohio, on June 18.

"Today, I return to Columbus to mark a milestone on the road to recovery: the 10,000th project launched under the Recovery Act," Obama said, announcing a $15 million effort to widen a roadway and add bike lanes.

Recovery summer was partly designed to recover the reputation of the government's $787 billion stimulus program. While many economists believe that program has worked to boost employment, the public is unimpressed. Advisers say by front-loading the stimulus with tax cuts and aid to states, they were able to get the money out quickly, but at the expense of visibility.

"As happened with many decisions, pragmatism won out," said outgoing White House economic adviser Christina Romer this week. "We agreed that many of the things that would improve the economy fastest were unglamorous measures ... many of which don't come with Recovery Act signs or easily identifiable links to the act. It has been hard for people to see what the act has done."

Recovery summer was supposed to change that as more federal dollars were poured into easily recognizable public works, including 15,000 road projects -- enough to crisscross the country 10 times.

"There's so many going on you almost can't take a drive this summer without seeing orange cones," said John Horsley, executive director of the American Association of State Highway and Transportation Officials.

All those federally funded road projects have kept an estimated 74,000 construction workers busy this summer.  But that's not enough to patch the country's giant economic pothole. With housing in a deep slump, unemployment in construction still tops 17 percent.

Obama joked back in June that the hungry road crews in Columbus would keep area restaurants busy. But it didn't work out that way for a nearby pizzeria.

"We're third generation -- started in 1939," said John Plank of the restaurant he runs with his brother and sister.

Plank said business has been slow this summer, in part because the road construction makes it hard for customers to reach his restaurant. He hoped to at least capitalize on the day of the president's visit, but the expected crowds didn't materialize.

"I hate to say it, but it was our worst Friday we've had in 10 years," Plank said. "I thought there were going to be all kinds of people down there, but I guess there were only 30 to 40 people, and they were all from Washington."

Plank thinks pizza sales will pick up in the fall, especially if the Ohio State Buckeyes have a good football season. But not everyone is so patient.

Private-sector hiring dropped off sharply in the United States after the Greek debt crisis. And by mid-August, the president's Gallup approval rating had fallen to a record low of 41 percent. It's bounced back a bit since then, but congressional Democrats still face the prospect of big losses in November.

"There are still 15 million people looking for jobs. There's still a great deal of uncertainty," said White House political adviser David Axelrod, when asked about the president's shaky approval. "You know we have challenges we have to continue to fight through. It's not going to be a straight line. It's not going to be easy."

On Monday, Obama huddled with his economic advisers, looking for new ways the government could promote hiring. But as the president spoke to reporters in the Rose Garden afterward, even a balky White House audio system seemed to be working against him.

"Let me try this one more time," Obama said, tapping on his microphone.

The president might not get many more tries at recovery. This is one summer Obama is probably happy to put behind him.