Accessibility links
Full Steam Ahead: Thomas The Tank Engine Turns 65 It's been 65 years since Thomas the Tank Engine first chugged into the hearts of young readers in 1945. Thomas started out as "Edward the Blue Engine" -- star of the many stories the Rev. Wilbert Awdry told his young son, Christopher, while he was sick with the measles. 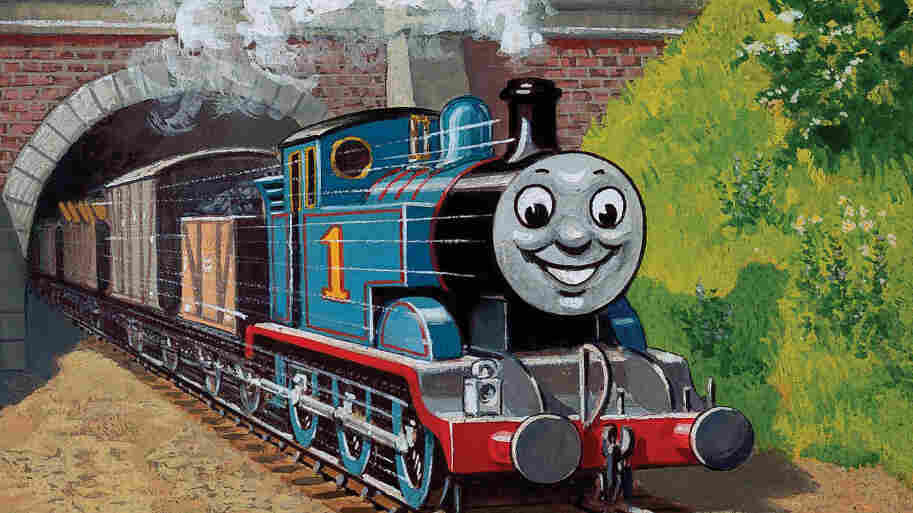 Thomas Was Happy. 'Come Along. Come Along,' He Puffed: It's been 65 years since Thomas the Tank Engine first chugged into the hearts of young readers in 1945. From picture books, to a stop-animation TV series, to CGI-animated DVDs and an iPhone app -- the adventures of the plucky blue steam locomotive have entertained generations of young train enthusiasts. Reginald Payne hide caption 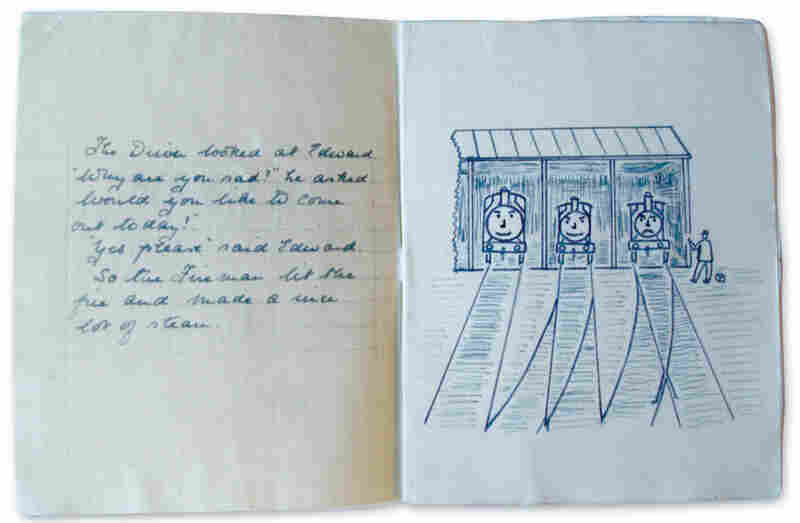 Thomas the Tank Engine began as "Edward the Blue Engine" -- star of the many stories the Rev. Wilbert Awdry told his son Christoper in the early 1940s. Christopher, who was sick with the measles, would correct his father if he did not use the same words to tell the stories each time, so Awdry began jotting the stories down. Above, a sketch from Awdry's first manuscript of Edward's Day Out. The Rev. Wilbert Awdry hide caption 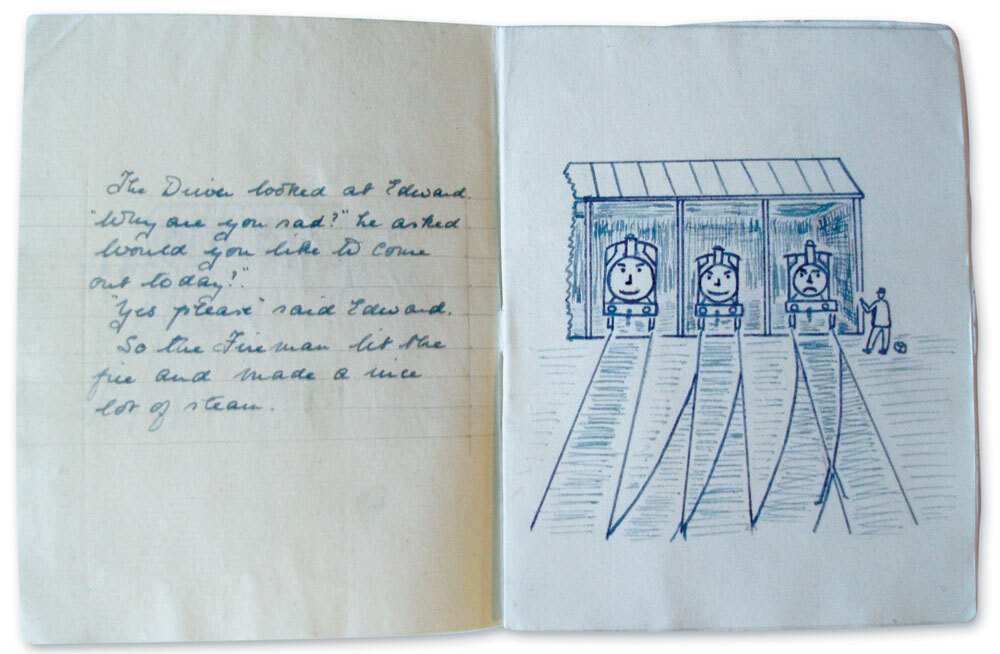 Thomas the Tank Engine began as "Edward the Blue Engine" -- star of the many stories the Rev. Wilbert Awdry told his son Christoper in the early 1940s. Christopher, who was sick with the measles, would correct his father if he did not use the same words to tell the stories each time, so Awdry began jotting the stories down. Above, a sketch from Awdry's first manuscript of Edward's Day Out.

Thomas -- that famous little blue tank engine -- hits retirement age this year, but the plucky, imaginary locomotive shows no signs of slowing down any time soon. Thomas the Tank Engine had humble beginnings as the star of stories that the Rev. Wilbert Awdry told his son Christopher in 1942, when Christopher was sick in bed with the measles.

Christopher would correct his father if the stories weren't told exactly the same way each time, so the reverend began jotting the tales down. Those stories became The Three Railway Engines, which Awdry published in 1945.  The Thomas books would become hugely popular in England -- and in 1984, Thomas landed his own TV series, which has been narrated by Ringo Starr, Alec Baldwin and George Carlin.

Now 70, Christopher Awdry shares his memories of his father and his beloved trains with NPR's Robert Siegel.

"These toys were created for me … as amusements while I was ill," Awdry explains. "Father didn't think anything very much of them, but he made me a little model engine which he happened to paint blue … and, in time, I asked for some stories about my engine."

Rev. Awdry was happy to make up stories about the little train, but told his son that it first needed to have a name -- so they called him "Thomas the Tank Engine."

The first season of Thomas The Tank Engine and Friends aired in 1984. It was narrated by Ringo Starr. The episode "Off The Rails" appeared in the show's first season:

Thomas is -- strictly speaking -- a "side tank engine" -- a steam locomotive that has tanks arranged on either side of the boiler.  When it came time to illustrate the Thomas books, it was extremely important to the reverend that the locomotives be depicted accurately.

Trains rolling through the English countryside had captured the elder Awdry's imagination when he was a boy. He based his imaginary locomotives on specific trains he remembered from his childhood -- E2 Class 0-6-0T locomotives built for the London, Brighton and South Coast Railway between 1913 and 1916.

"They are all based on original prototypes of locomotives that are run in this country," Christopher Awdry remembers, "and Father wanted them right."

Thomas' roundhouse is located on the fictional Island of Sodor, which the Rev. Awdry dreamed up in the early 1950s, after visiting the Isle of Man to preach at a Sunday school festival. Awdry had been on the lookout for places to set the imaginary railway -- he had received many letters from young readers asking, "Where's Henry's tunnel?" and "Where's Gordon's hill?"

"He discovered that the bishop [at the Isle of Man] is actually called the Bishop of Sodor and Man," Christopher Awdry explains. "On the way back, in the airplane from the Isle of Man to Liverpool, he realized that there was a wide-open space of sea between the two places and had the idea that if he were to create an island, he could call it Sodor -- and he could give the bishop of Sodor and Man the other half of his diocese back." 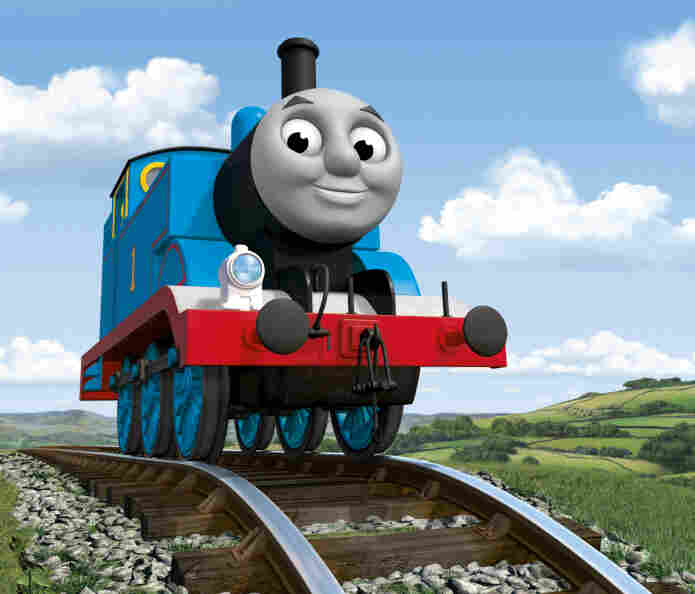 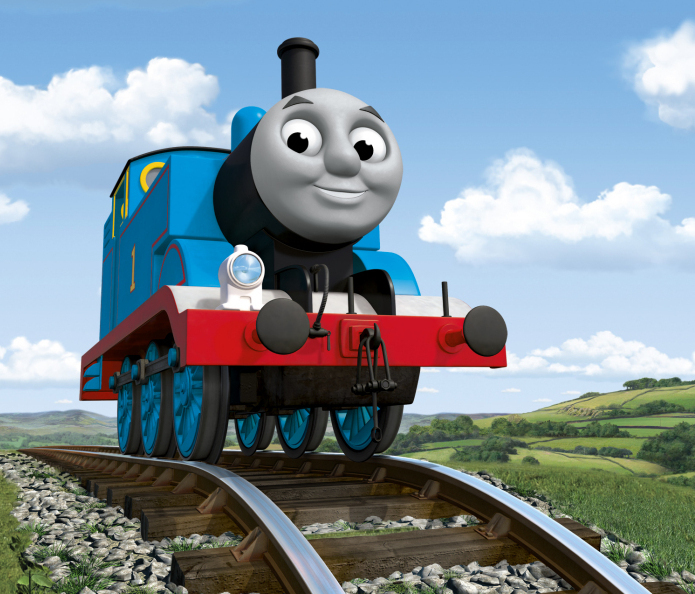 In the 1980s, Thomas & Friends TV episodes were produced using model trains and live-action animation. Today, in a series that debuted in September on PBS, Thomas is rendered in computer-generated imagery (CGI) animation.

The Rev. Awdry continued his work as a minister even while publishing Thomas stories, but Christopher Awdry says his father always kept his life as an author and his life as a clergyman separate.

"He was a clergyman, minister, first and foremost, and that was the priority," Awdry explains. "Writing stories was very much a spare-time occupation. It became his main source of income, but it was never his main source of employment."

'The Engines Were All His Family'

Even at age 65, Thomas remains slightly smaller than the rest of his engine friends in the roundhouse.

"I think he's a kid at heart," Awdry says. "[Thomas, Percy and Toby are] a bit like three small boys -- but yet rather more commonsense and know-how and streetwise than your average three small boys."

Thomas and his locomotive friends have been a part of Christopher Awdry's life since he was 2, and today, at 70, he can still say without hesitation that Toby the Tram engine -- a serious little guy who pulls local commuter cars -- is his favorite.

He vividly remembers the day back in August 1952 when he was allowed to stand on a locomotive for the first time -- it was the type of engine after which Toby was modeled, and he remembers it as "a very special thrill."

The Rev. Wilbert Awdry, however, always insisted that he did not favor one locomotive over another.