Accessibility links
Becoming Miles: The Journey Of Changing Sexes Megan Taylor grew up feeling she was living in the wrong body. In her 20s, she decided to do something about it. First, she changed her name to Miles. Miles began taking testosterone, scheduled a double mastectomy and began changing his body into one that felt right. The hardest part was telling his parents. 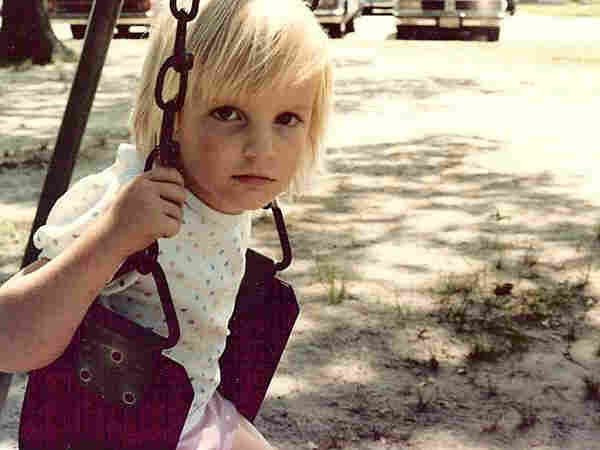 Megan Taylor grew up feeling she was living in the wrong body. In her 20s, she decided to do something about it. First, she changed her name to Miles. Courtesy of Miles Taylor hide caption 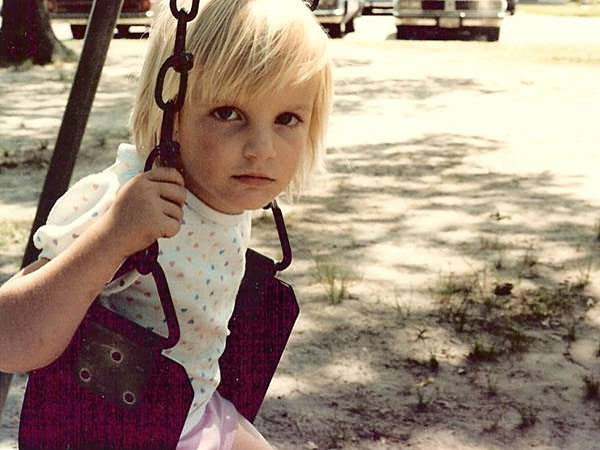 Megan Taylor grew up feeling she was living in the wrong body. In her 20s, she decided to do something about it. First, she changed her name to Miles.

Megan Taylor grew up feeling she was living in the wrong body. In her 20s, she decided to do something about it. First, she changed her name to Miles. Miles began taking testosterone, scheduled a double mastectomy -- part of sex reassignment surgery -- and began changing his body into one that felt right.  The hardest part was telling his parents.

Through it all, he kept an audio diary.

Miles lives in Boston with his friend Chris Jacobs, and first started recording his diary in November 2008. His parents, Vicky and Bill, live in Texas.

For Miles, the first step of changing his name was a milestone.

"It's interesting that so much can be attached to your name," he says into his recorder. "I've kind of already divorced myself from Megan. It feels separate from who I am now. And I really haven't latched on to Miles yet. Some days, I feel more Miles than Megan. It's kind of weird.  I have no problem saying 'Megan.' Now I need to say 'Miles.' But I need to say it in an ownership sort of way."

On Feb. 2, 2009, Miles is working on a letter to his parents. He reads the letter into the recorder.

"I need to talk to you two about something. Months ago I started writing you a long letter, but having edited it and revised and picked and poked at it for so many months, it started to feel more like a paper for school. I have a gender identity disorder.  I've had it my entire life without really being able to put a name to it and it has become severe to debilitating over the past couple of years. My body may appear and function as female, but in my head I have never felt a connection to my body. The sex of my body is female, but the gender I feel in my head is male.

I've always known that I was different, but I know now that it was only covering up what I feel I've known all along, what I've known since I was 6 years old, when I began putting a sock into my pants when I was alone, or when I used to pretend to shave my face with toothpaste and a toothbrush.  What I'm trying to explain here is that there's always been a disconnection with my gender and my physical body, and I have tried endlessly to figure out what was wrong, why I simply didn't feel right in my skin.  For the first time in my life, though, I am starting to feel a connection to who I am.

For the past few months, I have been living my life as male everywhere with the exception of my work. What that means is that all my friends have been using male pronouns when referring to me, and have been addressing me by another name.  The name I have chosen is Miles.

I'm delivering this information to you in the form of a letter for a couple of reasons. One, I never would have been able to say all of this to you in person without completely losing any and all composure. And two, I wanted to give you a safe space in which you could react however you needed to react without worry of judgment, as I realize this is not easy news to hear. However, I know this is right for me. You would not be sitting here reading this letter if that were not the case."

When Miles finally sends the letter several weeks later, he does it with Chris' support.

And Chris is there when Miles receives an e-mail back from his mother. Miles reads it aloud.

"It says: No matter what you do, it will not affect your relationship with us," he says. " 'Those are Daddy's exact words. He is, however, still digesting. I'm not as surprised as you might think, but I dread the further anguish you will endure. Health risks are a big concern. There are lots -- in capitals -- lots of questions.  Bottom line, we will always love you.  Do hope you already knew that.  Love you infinity, M.' That's my mom's sign-off."

Home For The Holidays

A year later, after months of testosterone treatments, after his voice changed, after surgery, Miles records how he's feeling. 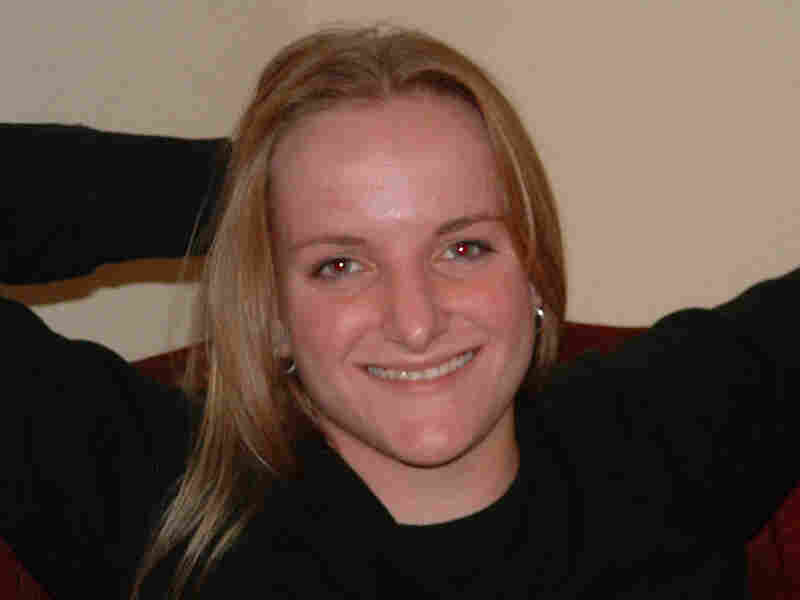 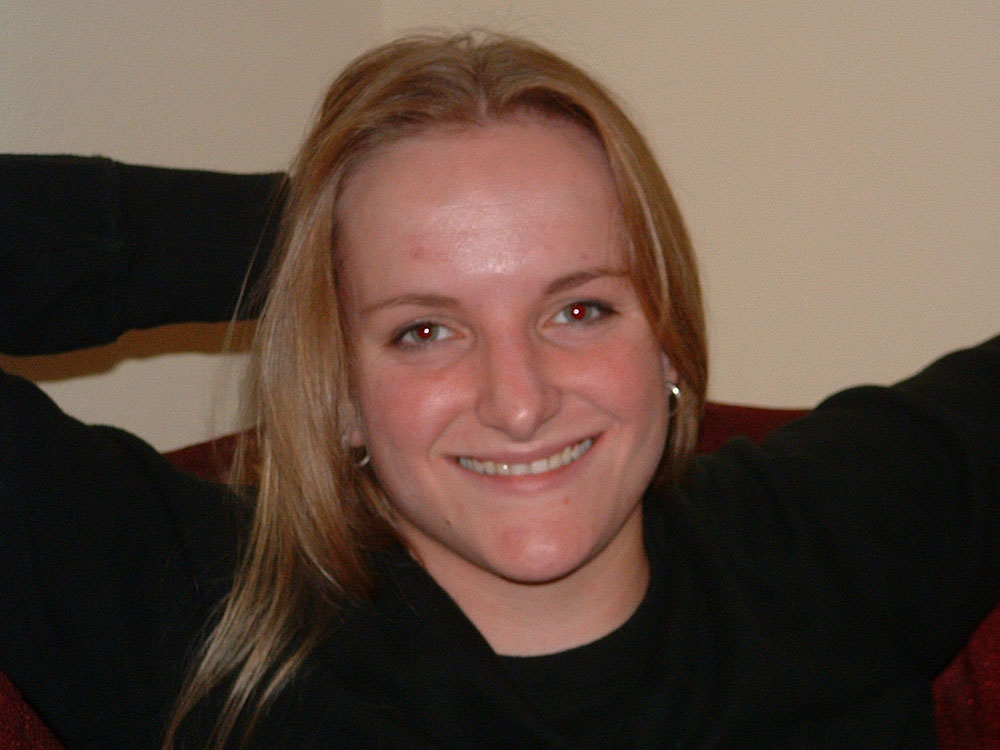 Miles Taylor before his transition.

"Last year sucked. I just, I felt like I was, you know, carrying around this secret. My parents didn't know. You wanna just scream at them and say, 'I have this news! Something's changing.' But now they know. They're really, they're really trying. It's always a big to-do when I return to Texas for the holidays, just because I don't see them all the time."

Over the holidays, Miles has a difficult conversation with his parents.

"We have had this tumultuous year of all the emotions, and as you said, the mourning," Vicky says. "And then to finally get you here. And by this time, now we've been waiting and waiting and waiting to see you and meet you and say, oh, here's Miles.  And there you were, and it was like. oh, your shoulders are bigger.  And the hug. You appear to me to be happy in your own skin.

"But you said you lost a daughter," Miles says. "I'm here you know, it's not like I died."

"The hardest thing was the loss," Vicky says. "The sad thing is, here you are flesh and blood, lovable, our child."

"Do you still feel like that?" Miles asks his parents.

"I don't anymore," Bill says. "But I felt like the child that I knew, the child in the picture on the ice box that I knew and grew up with, was gone. Just pure and simple, was gone."

"I just felt like somebody had taken a cannon ball and shot me through my middle, and I was walking around and living my life and doing everything, going to work and acting normal except I had this huge hole," Vicky says. "It was just there when I got up in the morning. It was there when I went to bed at night.  It was just there. But the other thing -- and I know it's the maternal guilt thing. I don't know if Daddy has this same feeling, but I feel you have done this heroic feat, you've accomplished this on your own. Even though you've known that you've always had our total love and support, but that's all you had from us.  We weren't actually holding your hand.  And I still have the text messages I got when you got out of surgery."

Vicky starts to cry, and Miles cries, too. 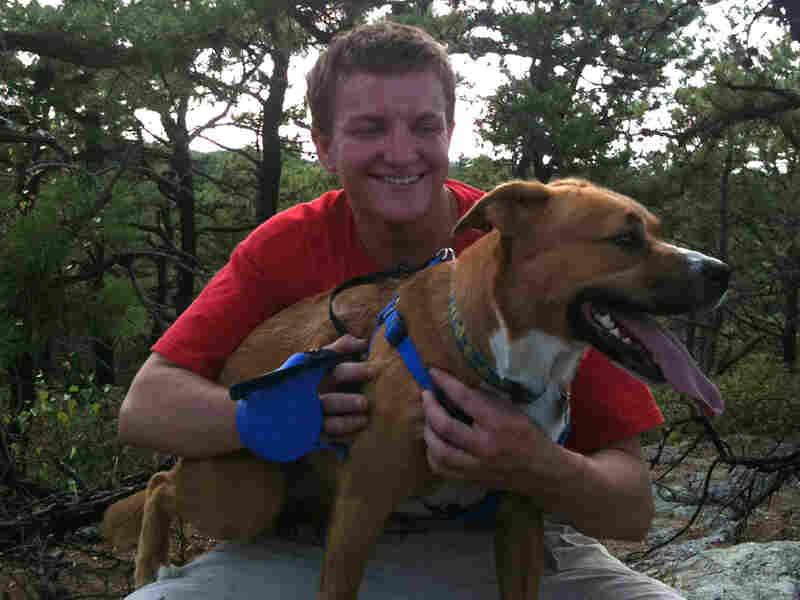 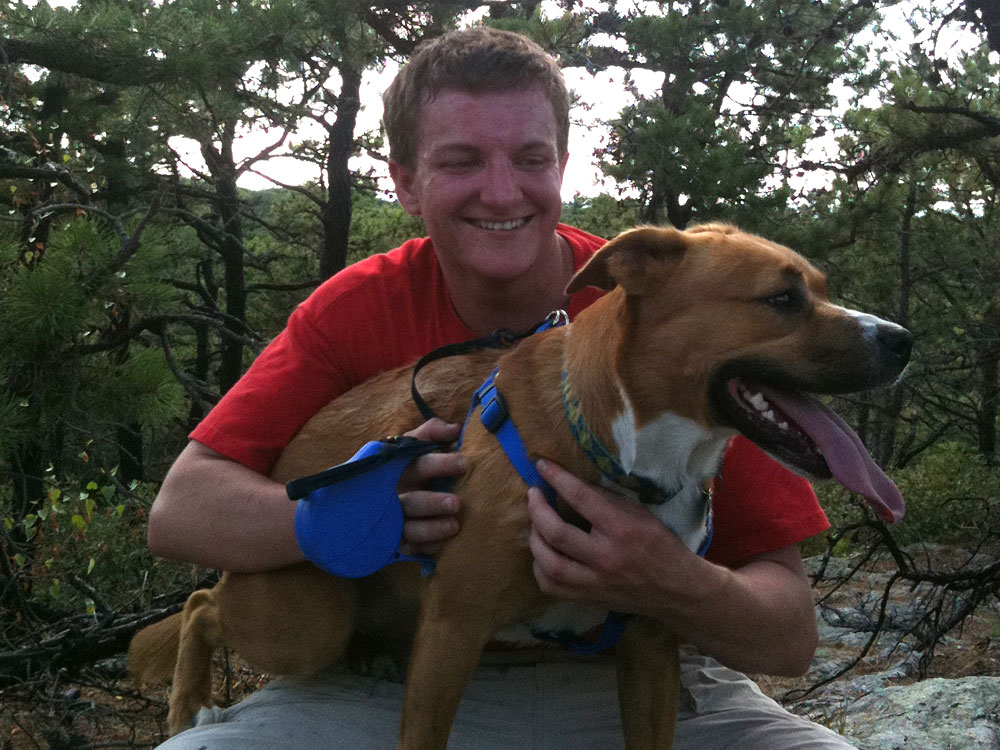 Miles Taylor with his dog after his transition.

"Anyway. Well, we love you," Vicky says. "Always have, always will. It's really nice to spend time with you."

Coming Into His Own

"You know how when a movie comes to the conclusion and it culminates with somebody standing outside, and it's just that sigh," Taylor says.

"I ran around without a shirt on for the first time outside. We had the reprieve from the cold weather, and it got a little warmer and it was drizzly, and I went to the park, shed my layers and, you know, cool breeze on my chest.  It was just absolutely amazing."

Produced by Sarah Reynolds with help from Jay Allison and Transom.org, where you can find a longer version of this piece.

More On Becoming Miles At Transom.org