Accessibility links
Un-Natural Selection: Human Evolution's Next Steps Millions of years ago, the natural environment was shaping us into the species we are now and humans evolved by natural selection.  But as humans continue to evolve, we've turned the notion of natural selection on its head. Nature isn't the only force that picks the genes. Humans are doing it too.

Human beings are defying nature. Or at least we’re trying to.

For billions of years, species have evolved by natural selection, the process by which genetic mutations that help an organism survive are passed on from one generation to the next and harmful ones are eliminated.

But natural selection takes time -- sometimes millions or even hundreds of millions of years. Humans have only been around for tens of thousands of years, but we are changing the world so much that genetic evolution simply can't keep up.

Millions of years ago, the natural environment was shaping us into the species we are now. Today, we create our own environments, and that has its consequences.

John Hawks, an anthropologist and geneticist at the University of Wisconsin, Madison, says we've created a lifestyle that is at odds with the one natural selection provided us with. Consider, for example, what ate when we were hunter gatherers, long before we started farming.

"We adapted to a diet that was much more balanced in terms of lean meat, in terms of high fiber vegetables.  And by de-accentuating those aspects of our former diet, we've created a new environment that humans aren't real suited to," Hawks says. 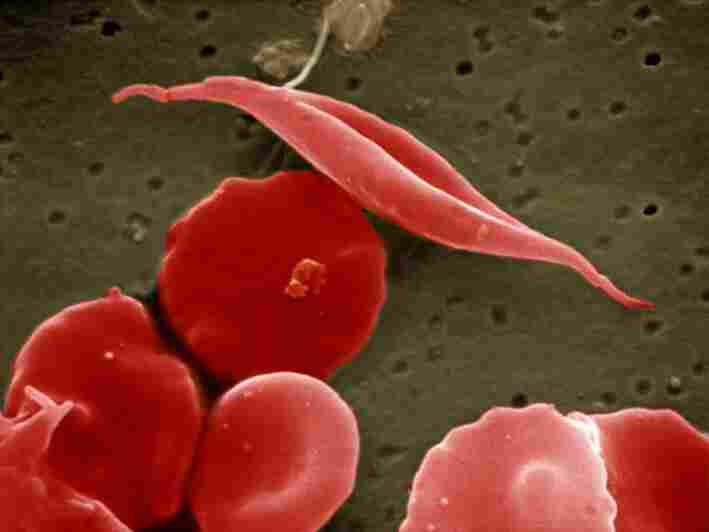 Oxygen is carried by red blood cells, but a specific mutation can cause the cells to take on a sickle shape and make them inefficient at carrying oxygen.  This highly adaptive mutation spread through Africa once malaria became a problem there. EM Unit, UCL Medical School, Royal Free Campus/Wellcome Images hide caption

Sometimes, though, genetic adaptation can happen fairly quickly. Hawks says the classic example is a mutation in a gene that makes red blood cells. It's called the sickle-cell mutation and spread through Africa once malaria became a problem there.

“That's a highly adaptive mutation where it occurs when there's malaria around, because it's protective against malaria," says Hawks. If you inherit the mutation from just one parent, you don't get sick. You only get malaria protection. It's only when you inherit the mutation from both parents that you get sickle-cell anemia. So if you're not living in a malaria environment, the mutation is just bad.” And you don’t want that gene, Hawks says, because your offspring have a chance of having sickle-cell anemia.

Really bad mutations tend to disappear, because the people who have them frequently don't live long enough to pass them on. That's what natural selection is all about.

Millions of years ago, the natural environment was shaping us into the species we are now. Today, we create our own environments, and that has its consequences.

But now in some cases we choose to keep these bad mutations around. Take the gene mutation that causes phenylketonuria, or PKU. People with the disease can't break down the amino acid phenylalanine, a problem that can lead to severe cognitive damage.

"It's a devastating disease that you can completely eliminate if you pick it up early," says Matthew Hirschfeld, a pediatrician at Alaska Native Medical Center.

And it can be picked up very early -- there's a genetic test for PKU that all babies in the U.S. get at birth. The treatment includes maintaining a diet with low levels of phenylalanine.

But curing the disease does not mean eliminating the mutation. Once upon a time, children born with PKU probably would never have offspring. Now they can, and that helps keep the mutation in circulation.

In fact, a large part of modern medicine is in the business of overcoming bad mutations.

“We want to have cures for things, we want to make things better," says Hawks. We do this with eye sight: Nearsightedness could have been fatal for people whose ability to survive depended on spotting dinner off in the distance. Now it doesn't matter if we inherited nearsightedness -- we wear eyeglasses.

We've turned the notion of natural selection on its head. Nature isn't the only force that picks the genes that stick around — we're doing it too.

"We wear contact lenses," says Hawks."You get Lasik surgery.  We can affect eye sight in many different ways. It's not perfect, but like many instances of technological development, we tinker at it and it changes and eventually we come to a point where we like it or keep changing.

We've turned the notion of natural selection on its head. Nature isn't the only force that picks the genes that stick around -- we're doing it too. We're moving toward a time when we can routinely repair, remove or even insert genes in people.

The question is whether we can do as good a job as nature has done up until now.

This story was produced by Jane Greenhalgh.