Accessibility links
Thousands Of Returning Soldiers Face A New Enemy The legacy of one of America's longest combat missions will continue to affect the thousands of troops who came home suffering from post-traumatic stress disorder and traumatic brain injuries. 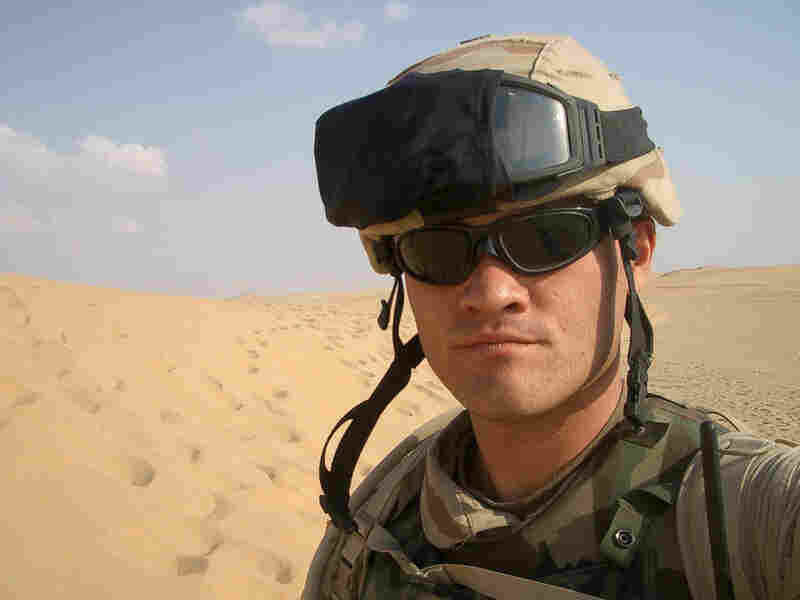 More than seven years after U.S. troops first invaded Iraq on March 20, 2003, President Obama addressed the nation on Tuesday to commemorate the official end of the Iraq War. However, the legacy of one of America’s longest combat missions will continue to affect the thousands of troops who came home suffering from post-traumatic stress disorder and traumatic brain injuries.

Many soldiers, like Colby Buzzell, were looking for excitement and purpose in the war, but were permanently affected by the combat they saw.

"I didn’t know what I wanted to do or be," Buzzell tells NPR’s Guy Raz. "Our country was at war, this was my chance to be part of history."

"You think of all the things you’re going to do once you go back home," he says. But once he got home, he had trouble coping. He began drinking heavily to avoid reliving firefights and combat missions. Eventually, he became more withdrawn. He and his wife divorced.

Traumatic brain injury is considered the "signature injury" of soldiers fighting in Iraq and Afghanistan. An NPR and ProPublica investigation has uncovered the military's failure to diagnose, treat and document brain injuries. Evidence suggests tens of thousands of soldiers are falling through the cracks.

Brain Wars: How The Military Is Failing Its Wounded Sept. 3, 2012

When Buzzell received a letter calling him back into the Army, he says, he would have done anything to avoid going back. He knew he wasn’t mentally stable and had been suicidal in the past. Finally seeking help, he was diagnosed with PTSD and deemed "undeployable" by the U.S. Army.

Though thousands of soldiers are diagnosed with PTSD, many more suffer without treatment. Among those who do seek treatment, doctors are finding another, distinctly different problem called traumatic brain injury, or TBI.

The two conditions have similar symptoms, but the causes are quite different. While PTSD is a psychological disorder that can be treated with medication and therapy, TBI is physical injury to the brain that requires cognitive treatment to help rebuild function.

"The main differences are that individuals with traumatic brain injuries also will have neurologic symptoms such as headache, light sensitivity, dizziness and will have difficulty, many times, with balance," O’Shanick says.

Individuals with PTSD, on the other hand, will re-experience events or have emotional or behavioral symptoms, like "feeling ashamed, feeling guilty, avoidance types of behavior, things of that nature," O'Shanick says.

Fortunately, doctors are working to develop a better understanding of how to treat the two different disorders and more soldiers are seeking and receiving treatment.