Accessibility links
After The Floods, Misery And Motivation In Pakistan As Pakistan struggles to overcome record floods, NPR's Julie McCarthy has been documenting the hardships of the people -- 8 million homeless -- and devastation to the land. She shares some of her impressions and experiences covering the disaster, which took her from the top of the country to the bottom and back up again. 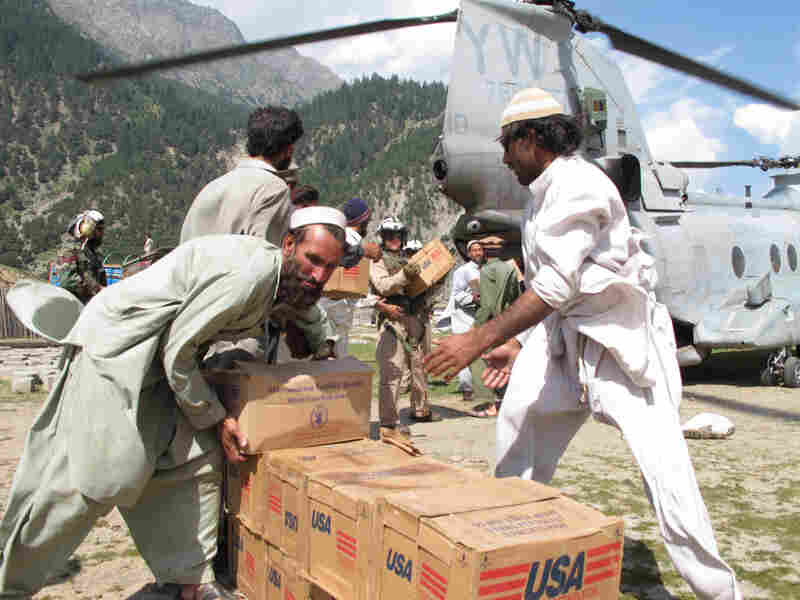 Cooking oil, flour, high-energy biscuits and baby food are unloaded from a U.S. Marine helicopter in a village in the upper Swat Valley that remains cut off nearly six weeks after the start of the flooding.  In the northwest corner of Pakistan flood waters swept away the bridges that were the lifeline for this mountainous and stream filled area. Susannah George/NPR hide caption

As Pakistan struggles to overcome record floods, NPR's Julie McCarthy has been documenting the hardships of the people -- 8 million homeless -- and devastation to the land. She shares some of her impressions and experiences covering the disaster, which took her from the top of the country to the bottom and back up again.

Liane Hansen: What was it like to get around all that flooding?

McCarthy: We took boats, planes, hovercrafts, inner-tube rafts, cars, trucks and helicopters. We spent the day Saturday ferrying around in a U.S. Marine helicopter with the American military, which is working round-the-clock to reach cut-off populations in the upper Swat Valley. Three and half weeks ago, we joined a caravan of heavy trucks that would plow through the water 5 feet and more of water trying to get supplies to stranded flood victims or to reach home with livestock and Grandma squeezed into these tall trucks. They needed to be huge just to clear the water level on the flooded roads, and plenty of them wound up overturning with people inside and swept away.

Why We've Given Less To Pakistan's Flood Victims

I got goose bumps listening to one of the chief administrators in the southern province of Sindh describe the all-night vigils at the Sukkur Barrage. He said the water sounded like "a thousand serpents hissing." His residence was below the water line by 67 feet -- naturally, it always is -- and he was told to evacuate and he refused. Here's how he described those harrowing nights that in the end had a happy ending:

But he stayed there. "I was up there on the dyke, trying to plug the seepages, or leaks. It was basically an all-out effort by the entire residential community of the city. It was one marvelous, motivational scene."

You had some exciting moments yourself — at one point the army had to come and rescue you?

Well, yes. We were in one of those tall trucks and the sun was setting. We'd spent the entire day trying to reach what was then the cut-off city of Dera Ghazi Khan in the southern Punjab. We went from a car to a truck to a boat. When we were turning back, miraculously we re-connected with the same truck that had taken us through the flood waters, passed overturned trucks, past bodies of people who had been fished from the water, including the driver of one of those overturned trucks.

We were losing light and knew we had to move or we'd be stuck so we caught that last ride out. Half-way through the floodtides, the engine of the truck flooded. Our hearts sank as we passed overturned trucks, and now ours was dead in the water. A crew jumped into the snake-infested waters and started pushing, but got nowhere.

Well, who happens along but Capt. Farooq who we'd met earlier in the day. His troops had given us a boat ride in a tiny craft loaded with families that barely stayed afloat. The same captain whom we'd thanked profusely for the boat ride happened along in a convoy of three army trucks. After three passes at maneuvering his convoy close enough, we trapezed over into the army boats out of stranded truck. The captain watched this looking like Alan Arkin in The Russians Are Coming: exhausted and bemused. He's seen it all. This was just another day for him.

You saw so many people in so much distress. Was there someone who really stood out? Was there one moment that was especially memorable?

There were a lot of memorable moments, including my room catching fire at 4 in the morning in a godforsaken guest house in Sindh. Then there was this long drive on a skinny road past this levee that was keeping out an ocean of water. All that separated us was a few feet of dirt from that water.

But there was one scene I found revealing, kind of touching and almost funny at the same time. A woman was encamped in a tented community set up by the Air Force. Her name was Jeejan Khoso. She stood at the flap of her tent, which had only a hardened mud floor. This is where she and her 17- member family were encamped. That's where they slept. To bathe, all she can do is spray her self down fully clothed at night.

I go to one of the Air Force doctors and ask about matting for them to sleep on. And he tells me, "Oh, we issue these mats and the flood victims sell them." By chance I turn around and Jeejan is standing there at the health clinic where I'd buttonholed the doctor. I approach her and ask her if she sold her mat.

"We didn't receive any mats," she says, looking at me like I'm crazy. "I've got 17 people in my family -- most of them are little children. Why would we sell a mat when we knew we had to sleep on the mud?"