Accessibility links
Scientist Watches Glacier Melt Beneath His Feet Scientists collecting ice cores from Indonesia's Pancak Jaya say they saw the 16,000-foot glacier drop 12 inches in just two weeks. Puncak Jaya is one of the few tropical glaciers remaining in the world, and it's especially vulnerable to climate change. This makes it especially important to researchers. 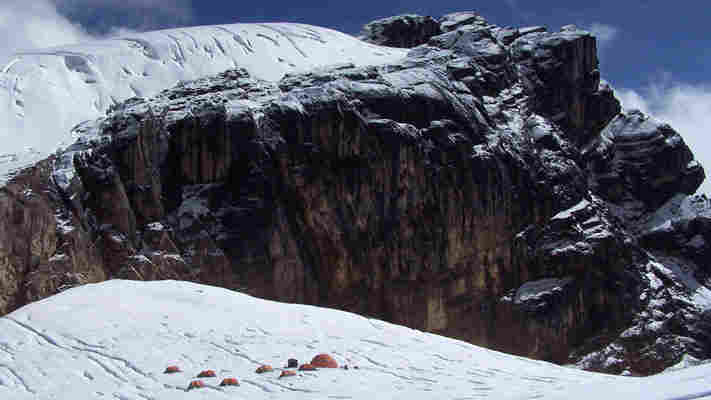 Lonnie Thompson, a professor of earth sciences at Ohio State University, led a team of scientists drilling for ice cores atop the Puncak Jaya glacier in Papua, Indonesia. Here, their base camp sits below a massif bearing one of the upper ice fields. Courtesy of Paolo Gabrielli/Ohio State University hide caption

Earlier this summer, a group of scientists spent two weeks in Indonesia atop a glacier called Puncak Jaya, one of the few remaining tropical glaciers in the world. They were taking samples of ice cores to study the impacts of climate change on the glacier.

Lonnie Thompson, a professor of earth sciences at Ohio State University, led the team and what he witnessed shocked him: The glacier was literally melting under their feet.

Thompson tells NPR's Guy Raz he has conducted 57 expeditions around the world, but this trip was unusual. It was the first one where he experienced rain on the glacier every day.

"Rain is probably the most effective way to ... cause the ice to melt," Thompson says. "So this was the first time you could see the surface actually lowering around you."

While Thompson and his team were there drilling cores, he says, they witnessed the glacier drop 12 inches in just two weeks.

"If that's representative of the annual ice loss on these glaciers," he says, "you're looking at losing over seven meters of ice in a year. Unfortunately, that glacier's going to disappear in as little as five years if that rate continues."

Puncak Jaya is one of the few tropical glaciers remaining in the world, and it's especially vulnerable to climate change. This makes it especially important to researchers.

"Well, it's located about 4 degrees south of the equator. It's the only glacier on western side of the Pacific warm pool, the warmest waters on earth," Thompson says. "For looking at the history of El Nino, it's a wonderful location."

Losing the glacier wouldn't have much environmental impact for the local people, Thompson says, but it would have a deep spiritual impact.

"For the tribes that live in that area, the glaciers are the head of the skull of the god and the mountains are the arms and the legs," he says. "If they lose the glaciers then they’re going to lose part of their soul."

The Canary In The Coal Mine

Just because the melting of the glacier won't have a devastating impact on Indonesia doesn't mean it should be ignored, Thompson says. Rather, it's like the canary in the coal mine -- an indicator of changes in the planet's warming trends. And one that should be seen with boots on.

"When we look at what's happening to the ice on the planet, we use satellites. The problem with the satellite or aerial photography is you don't see the vertical thinning that's taking place," Thompson says. "Consequently there'll come a year in the future that there'll appear to be a glacier but it will disappear the next year because of the thinning from the top down. And to me, that's very sobering."

Thompson and his team may not be able to stop the glacier from melting, but in a certain sense they have managed to save Puncak Jaya.

"Part of our mission was to collect the record before it disappears so that we have a history from that part of the world," he says. "We store part of those cores in our cold room here at Ohio State because we know that 20 years from now there'll be new technologies and a better understanding of the climate system -- but there's not going to be any ice to drill."