Accessibility links
National Review: Big Labor's Power Grab With the "card-check" provision stalled in congress, union leaders have been forced to wait on the sidelines, hoping that President Obama's new appointee to the National Labor Relations Board will help them push their agenda in the coming months. But Mark Mix of the National Review argues that if the White House was really fair to employees, it would enable them to vote out unwanted unions 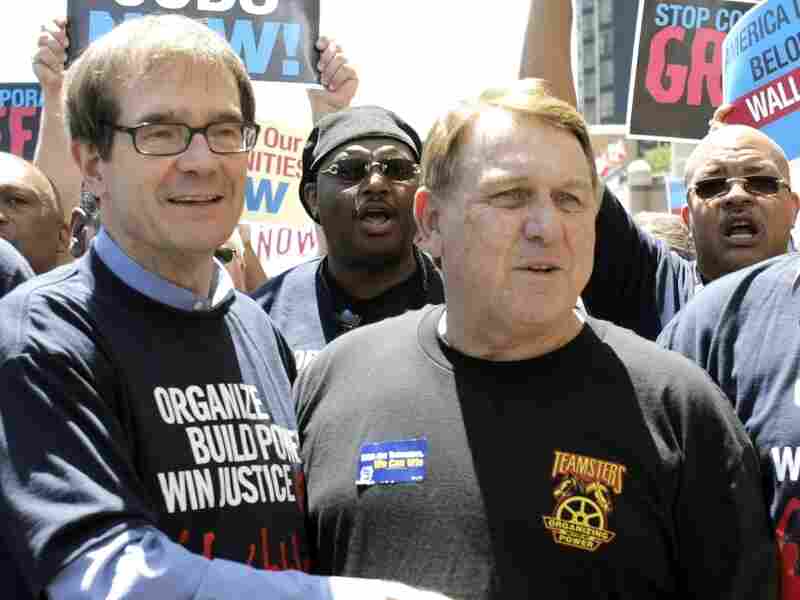 After spending over a billion dollars to elect Barack Obama president and Democratic majorities to Congress in 2008, Big Labor thought it had bought enough support to ram through a “card check” bill that effectively eliminates secret-ballot votes for unionization and lets federal bureaucrats dictate contracts to employees and employers.

But despite an intense, union-boss-backed lobbying campaign, attempts to pass card check stalled as elected officials felt the heat from voters, who are overwhelmingly against the bill. With a vote on the legislation unlikely between now and Election Day, opponents of card check may be tempted to rest easy, but Big Labor has other plans.

For another opinion on the role of unions in the United States see this story from The New Republic.

Union bosses are still intent on pushing more workers into their forced-dues-paying ranks. The only thing that’s changing is their approach, which has shifted from congressional trench warfare to executive-branch power grabs.

The harbinger of this new strategy is Obama’s appointment of Craig Becker to the powerful National Labor Relations Board (NLRB), the federal agency that dictates the contours of American labor law. Becker, a former Big Labor lawyer, is a walking conflict of interest — despite a career spent crafting SEIU legal strategies, he has refused to recuse himself from several cases before the NLRB involving that union’s local affiliates.

Becker has also suggested that card-check legislation could be implemented administratively, without congressional authorization. And from his new perch at the NLRB — an agency dominated by Big Labor–friendly appointees — Becker is in a position to do just that.

Obama’s pliant NLRB has also decided to reconsider a case that would roll back worker protections during card-check organizing campaigns. Under current law, union operatives can be installed via card check only if they strike a deal with management. These “neutrality agreements,” the existence of which is normally kept secret from employees, often benefit union officials at employees’ expense.

A few years ago, the NLRB’s landmark Dana decision — won by the National Right to Work Foundation — established a few limited procedural safeguards during card-check drives. Because employees are often coerced or intimidated into signing union cards, the NLRB ruled, workers must have a 45-day “window period” after a union is installed viacard check in which to challenge the results with a secret-ballot vote.

The Dana decision, while not a fix for the coercion and unreliability of card-check union drives, does provide a modicum of protection for workers who have been pushed into union ranks under questionable circumstances.

Becker denies having pre-judged the challenges to Dana, despite a long career of advocating card-check organizing. He also authored an amicus brief in the Dana case opposing any escape hatch via which employees could vote out an unwanted union.

Meanwhile, the NLRB put out feelers earlier this summer for implementing electronic unionization elections, a scheme that will likely force workers to submit votes via computers, cell phones, or PDAs. Unfortunately, there isn’t much difference between aggressive union organizers’ going door to door with authorization cards and aggressive union organizers’ going door to door with laptops. Allowing Big Labor operatives to pressure workers through electronic unionization drives would reproduce the same abuses associated with card-check organizing, and would introduce the potential for electronic fraud and hacked votes.

By cramming the NLRB full of forced-unionism operatives, Obama has successfully laid the groundwork for a stealthy push to undermine the rights of American workers. The NLRB’s administrative agenda and electronic-voting schemes now threaten to undo much of the hard work that went into defeating card-check legislation.

Some doubt that such sweeping changes could be enacted without congressional approval, but we’ve already seen Big Labor’s strategy in action. The National Mediation Board (NMB), a federal agency that governs airline and railway employees, has just enacted a far-reaching rule change that allows for workplace unionization without the consent of a true majority of employees.

Since 1934, rail or airline union officials have needed a majority of affected employees to affirmatively vote for union officials before they could be installed as monopoly-bargaining agents. The board previously backed this procedure under both Democratic and Republican administrations. A recent rule change, however, allows union operatives to push rail and airline workers into Big Labor’s ranks with a majority of only those workers who choose to vote. The NMB has yet to actually conduct an election under the new rules, so exactly how it will play out is unclear — but in theory, thousands of employees can now be forced into union ranks based on the votes of only a tiny percentage of their peers. For railways and airlines, bargaining units are nationwide, so this policy gives unions a great incentive to suppress the vote in areas with high union opposition.

The NMB’s abrupt rule change — and its consequences for employees — is a portent of things to come. After a highly publicized legislative setback, Big Labor’s political operatives have succeeded in lulling the public to sleep while they push their agenda into law.

This Labor Day, Americans should celebrate the rights of employees by remaining vigilant against Big Labor’s power grabs. Anything less, and American workers will be left sadly vulnerable to workplace abuse.