Accessibility links
The New Republic: Nostalgia For Unions This Labor Day was a bittersweet moment. While the holiday is a cause for celebration, the high unemployment makes it hard to get into the spirit. E. J. Dionne of The New Republic argues that in honor of Labor day, we should remember that although unions have not always been perfect, they stand to remind us of the dignity of those who toil.

The New Republic: Nostalgia For Unions

The New Republic: Nostalgia For Unions 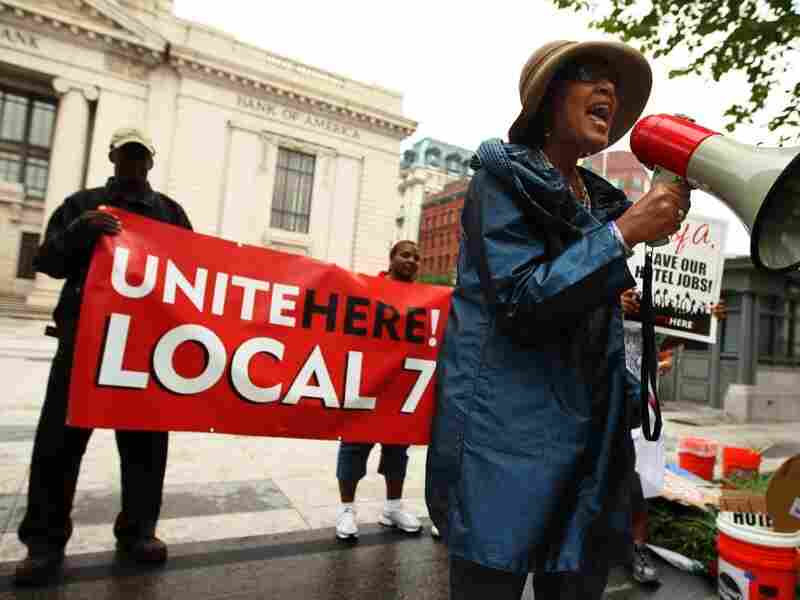 E.J. Dionne, Jr. is is a Washington Post columnist, a senior fellow at the Brookings Institution, and a professor at Georgetown University. He is the author of Souled Out: Reclaiming Faith and Politics After the Religious Right.

Watching the great civil rights march on television in August 1963, I couldn't help but notice that hundreds carried signs with a strange legend at the top: "UAW Says." UAW was saying "Segregation Disunites the United States," and many other things insisting on equality.

This "UAW" was a very odd word to my 11-year-old self and I asked my dad who or what "U-awe," as I pronounced it, was. The letters, he explained, stood for the United Auto Workers union.

For another opinion on the role of unions in the US, see this story from the National Review.

It was some years later when I learned about the heroic battles of the UAW, not only on behalf of those who worked in the great car plants but also for social and racial justice across our society. Walter Reuther, the gallant and resolutely practical egalitarian who led the union for many years, was one of Martin Luther King Jr.'s close allies.

Remembering that moment is bittersweet on a Labor Day when so many Americans are unemployed, when wages are stagnant or dropping, and when the labor movement itself is in stark decline.

Only 12.3 percent of American wage and salary workers belong to unions, according to the Bureau of Labor Statistics, down from a peak of about one-third of the work force in 1955. A movement historically associated with the brawny workers in auto, steel, rubber, construction, rail, and the ports now represents more employees in the public sector (7.9 million) than in the private sector (7.4 million).

Even worse than the falling membership numbers is the extent to which the ethos animating organized labor is increasingly foreign to American culture. The union movement has always been attached to a set of values—solidarity being the most important, the sense that each should look out for the interests of all. This promoted other commitments: to mutual assistance, to a rough-and-ready sense of equality, to a disdain for elitism, to a belief that democracy and individual rights did not stop at the plant gate or the office reception room.

You might accuse me of being a union romantic, and in some ways I am, having grown up in a union town, loved the great union songs, and imbibed such novels about labor's struggles as John Steinbeck's fine and underrated In Dubious Battle.

So, for the record, I am fully aware of the union movement's failures. I recognize that certain unions became corrupt and others were decidedly undemocratic, that some union contracts proved excessive, and that "solidarity" could turn into intimidation.

Yet these problems get more than ample attention, while labor's achievements go largely unmentioned. The hugely constructive contributions of Reuther (or Sidney Hillman or Eugene V. Debs) are barely noted in standard renditions of U.S. history. Few Americans under 35 have much direct experience with unions. When the word "union" appears in the media these days, it is typically invoked in stories about teachers resisting school reform or the pension costs burdening local governments.

All but forgotten is the fact that our nation's extraordinary prosperity from the end of World War II to the 1970s was in significant part the result of union contracts that, in words the right-wing hated Barack Obama for saying in 2008, "spread the wealth around." A broad middle class with spending power to keep the economy moving created a virtuous cycle of low joblessness and high wages.

Between 1966 and 1970, as Gerald Seib pointed out last week in The Wall Street Journal, the United States enjoyed an astonishing 48 straight months in which the unemployment rate was at or below 4 percent. No, the unions didn't do all this by themselves. But they were important co-authors of a social contract that made our country fairer, richer and more productive.

There are many complicated reasons why these arrangements broke down, but I do not see things getting substantially better unless we find ways of increasing the bargaining power of wage-earners—precisely what Reuther and his fellowship dedicated their lives to doing.

Beth Shulman, a writer, lawyer and union leader who died of cancer earlier this year at the age of 60, called our indifference to those who labor for low wages "The Betrayal of Work," the title of her classic 2003 social portrait of our time. Whatever else they achieve, the unions remind us of the dignity of all who toil, whatever their social position, color or educational attainments. We should miss labor's influence more than we do.