Accessibility links
Hating On The President: A Great American Pastime Is there anything a president can do to escape widespread criticism? Get another job, perhaps. Historians say it's in Americans' DNA to turn on whoever is in the White House. We've been doing it since the beginning.

Hating On The President: A Great American Pastime

Hating On The President: A Great American Pastime 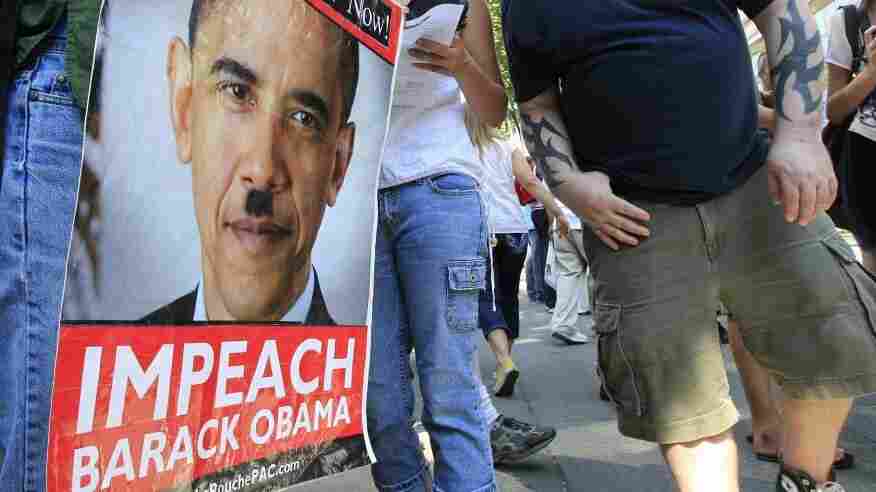 Protesters gathered outside a hotel in Seattle on Aug. 17 during a visit to the city by President Obama. Elaine Thompson/AP hide caption

The Republicans are doing it: Ben Quayle, son of former Vice President Dan Quayle and now a Republican candidate for Congress in Arizona, states unequivocally in a campaign ad that "Barack Obama is the worst president in history."

The Democrats are doing it: In The Wall Street Journal this summer, Democratic stalwarts Patrick Caddell (pollster for Jimmy Carter) and Douglas E. Schoen (pollster for Bill Clinton) badmouthed President Obama, accusing him of a "cynical approach to governance." They said his divisiveness "has weakened us as a people and paralyzed our political culture."

In fact, everybody is doing it: According to a recent Gallup Poll, the president's job approval rating has fallen from 68 percent in January of 2009 to 42 percent in mid-August 2010. A recent Time magazine story explored "How Barack Obama Became Mr. Unpopular." 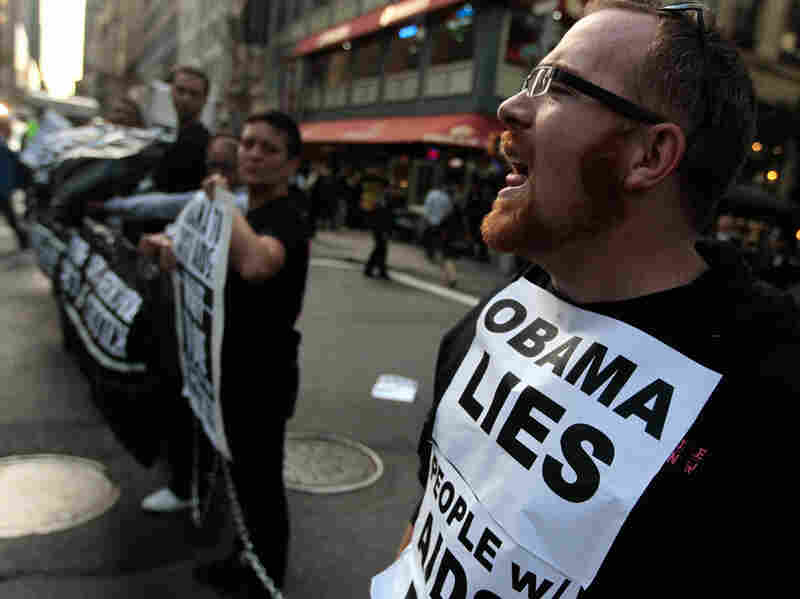 An AIDS activist shouts slogans during a protest in New York City on May 13. The president was at a fundraiser in the city and activists were protesting his administration's policies on AIDS funding. Chris Hondros/Getty Images hide caption

More and more people are hating on the president. What is a loathed leader to do?

Wailing On The White House

For one thing, says presidential historian Catherine Allgor of the University of California, Riverside, President Obama should take comfort in knowing that hypercriticism of the president is a revered American tradition. "Even George Washington -- who was often regarded as a demigod -- came in for his share of snarky remarks," Allgor says.

One problem today, says Douglas Wead, who was a special assistant to President George H.W. Bush, is that older baby boomers grew up in the Eisenhower years -- when "there was a national consensus leader, after facing an enemy, with moral certainty on our part." That generation, Wead says, thought that political harmony and relative homogeneity were the national norm. Consequently, the boomers see the subsequent bitterness in presidential politics as an aberration. "I am afraid," Wead says, "it is the other way around."

Hating presidents is in our DNA.

For instance, the Andrew Jackson presidency in the early 19th century was especially rough. When Jackson was elected in 1828, Wead says, "his wife went to Nashville to buy her dress for the inauguration, read some old newspapers, saw the vitriol and hatred directed toward her and her husband and died within weeks."

The mocking of the president has ebbed and flowed through the years. The Hearst radio network was organized to bring down Franklin Delano Roosevelt, Wead says, and "on and on it goes."

Nowadays, cable television offers viewers a channel for every bias. And the Internet gives voice to any old yahoo with a user name. Not that there's anything wrong with that. But these innovations do, by their very nature, add coarseness to the discourse.

"Hating presidents is in our DNA," says Thomas Schwartz, a presidential historian at Vanderbilt University. "The more consequential the president, the more intense the hate. [Lyndon] Johnson had a play written about him called MacBird which accused him of killing Kennedy. Roosevelt was despised by America's upper class -- some referred to him as 'rubber legs.' "

Democrats usually flavor their hate with contempt for the president as stupid, Schwartz says, pointing to Gerald Ford, Ronald Reagan and George Bush the younger. Republicans, on the other hand, tend to focus on certain characteristics -- corruption with Harry Truman, dishonesty with Bill Clinton. "The reason people are surprised that this hatred has come back with Obama," Schwartz says, "is that he did enjoy a pretty elevated reputation during the campaign, and the fact that he's African-American may have held back some of the vitriol."

But in the end, Schwartz says, "I think it's American as apple pie, motherhood, and praising soldiers."