Accessibility links
Green Building: A Real Estate Revolution? Green building now accounts for close to one-third of new U.S. construction. That's up from 2 percent in 2005, according to McGraw-Hill Construction, which tracks the industry. The U.S. Green Building Council, and its LEED rating system, have changed construction practice -- and policy -- around the country. 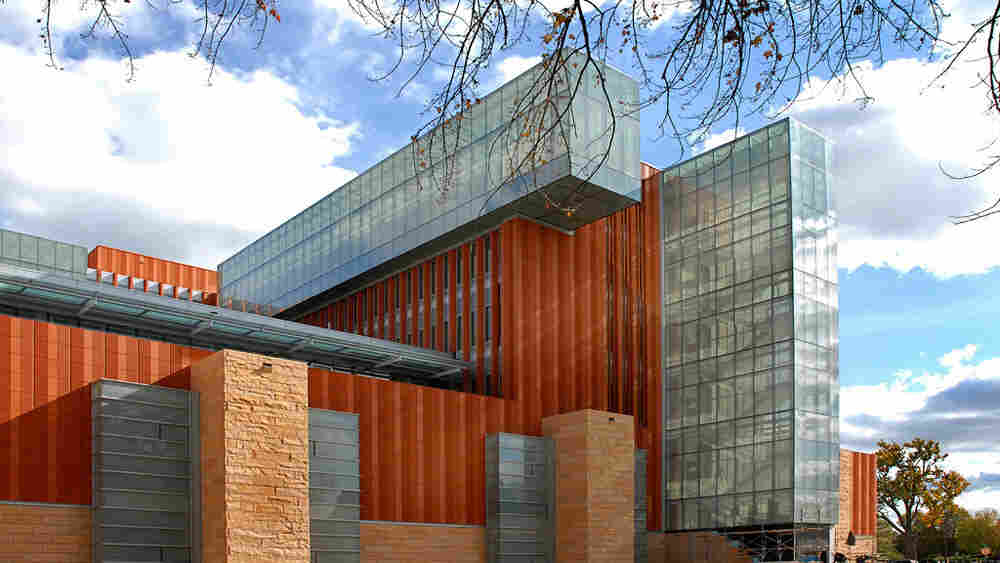 toggle caption
Courtesy of the University of Michigan 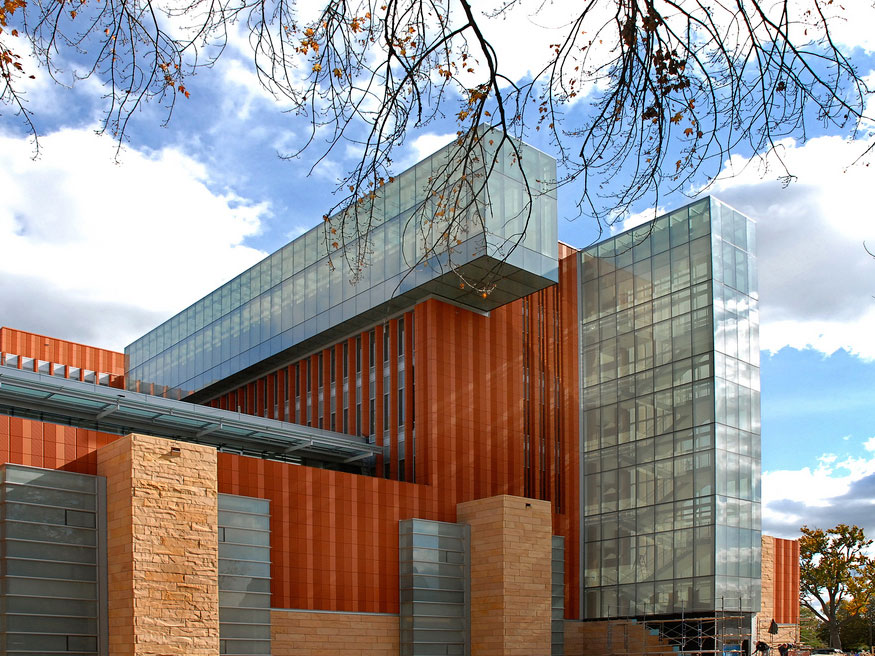 The University of Michigan leadership committed this summer to seek LEED certification for every new construction project of at least $10 million. The new Ross School of Business building is full of environmentally friendly technology.

Courtesy of the University of Michigan

While much of the U.S. real estate market has been floundering, one area has not seen a dip. Green building now accounts for nearly one-third of new construction in the U.S. That's up from 2 percent in 2005, according to McGraw-Hill Construction, which tracks the industry.

The numbers suggest a revolution is taking place within an industry that is historically slow to change. There are many factors -- and many players -- in this move toward green building.

But one company and its rating system have been undeniably influential in changing construction practice and policy around the country, despite some people's reservations about whether it's really helping the environment.

University Of Michigan Banks On LEED

The new Ross School of business building at the University of Michigan is full of environmentally friendly technology.

Is LEED Certification Worth The Cost?

The University of Michigan officials ran the numbers this year and decided that yes: the intangibles that come from LEED are worth the investment. The university committed to seek certification on all of its new building projects worth more than $10 million.

Terry Alexander, executive director of the university's Office for Campus Sustainability, helped conduct an analysis of the school's recent building projects. He says that the added cost of LEED certification is a relatively small percentage of the overall cost of a building.

The university already prioritizes saving energy and water in its new buildings. So, for a $100 million project of the average building type, the additional cost to reach LEED silver is about 2 percent. That includes the "hard cost" of additional environment-friendly features. It also includes "soft costs." That's the money associated with paperwork for LEED, which, on its own, comes to about half of a percent of the building's price tag.

Alexander says for a builder that wouldn't otherwise make efforts to conserve, LEED silver certification would add 4.7 percent to the cost of that same $100 million project.

While it's not much in percentage terms, that's still millions of dollars. Alexander says the school had to make a judgment call about whether to spend that money to achieve certification or some other way — perhaps on additional energy-saving measures.

Michigan decided that the LEED plaque sends a message about the school's environmental priorities that carries a lot of weight with potential students and employees.

Andy Hoffman, a professor of sustainable enterprise, who teaches a course in green construction, and facilities manager John Bresette gave a tour of the facilities. Oddly enough, among the highlights is a men's room equipped with dual-flush toilets.

"One of the humorous things about studying this kind of topic is you can talk about dual-flush toilets and waterless urinals in polite company," Hoffman says.

Bresette says it saves a little water to pull the lever up -- it uses 0.8 gallons instead of 1.6 gallons if the lever is pressed down.

"It's pretty intuitive," Hoffman says. "I think ... the more culturally challenging issue for some people is a waterless urinal. People immediately think, 'Oh this is gonna stink.' But it doesn't smell. You can't smell it right now."

That's as long as the filters get changed regularly. In construction, as in other arenas, green manufacturers have sometimes had to contend with the perception that their products are inferior. Plumbers unions have opposed waterless urinals. Nonetheless, the sector for green building products -- paint, wallpaper, windows, flooring -- is burgeoning.

That sector was practically nonexistent in 1993, when the U.S. Green Building Council got its start. The USGBC created the Leadership in Energy and Environmental Design, or LEED, program. Hoffman gives the council a lot of credit for helping create demand.

"They created a cachet around the LEED certification," he says. "And they got people to want to do this as a marketing pitch -- and I think that was really a stroke of genius to get a rather inertial industry to start to shift."

Certified buildings get a plaque for prominent display. And if you already know all of this, it's a sign of the brand recognition LEED has developed. Hoffman says he thinks this is now key to attracting top students.

"College campuses are all starting to go this way," he says. "If you want to keep up with the Joneses, you kinda gotta do that."

The University of Michigan leadership agrees. This summer, it committed to seek LEED certification for every new construction project of at least $10 million. On the average $100 million project, the leadership figures it will add 2 percent to the cost. This is a big endorsement of LEED. The university has a $2 billion construction program.

LEED is set up like an arbiter of a sort of building Olympics. Projects earn points for various features. Use renewable cork flooring, for instance, get a point in the materials and resources category. Use paint that doesn't give off toxic substances -- score a point for indoor environmental quality. There are categories for water efficiency and energy. Pay the fees, rack up enough points, and win a basic, silver, gold or platinum rating. The Ross building achieved silver. 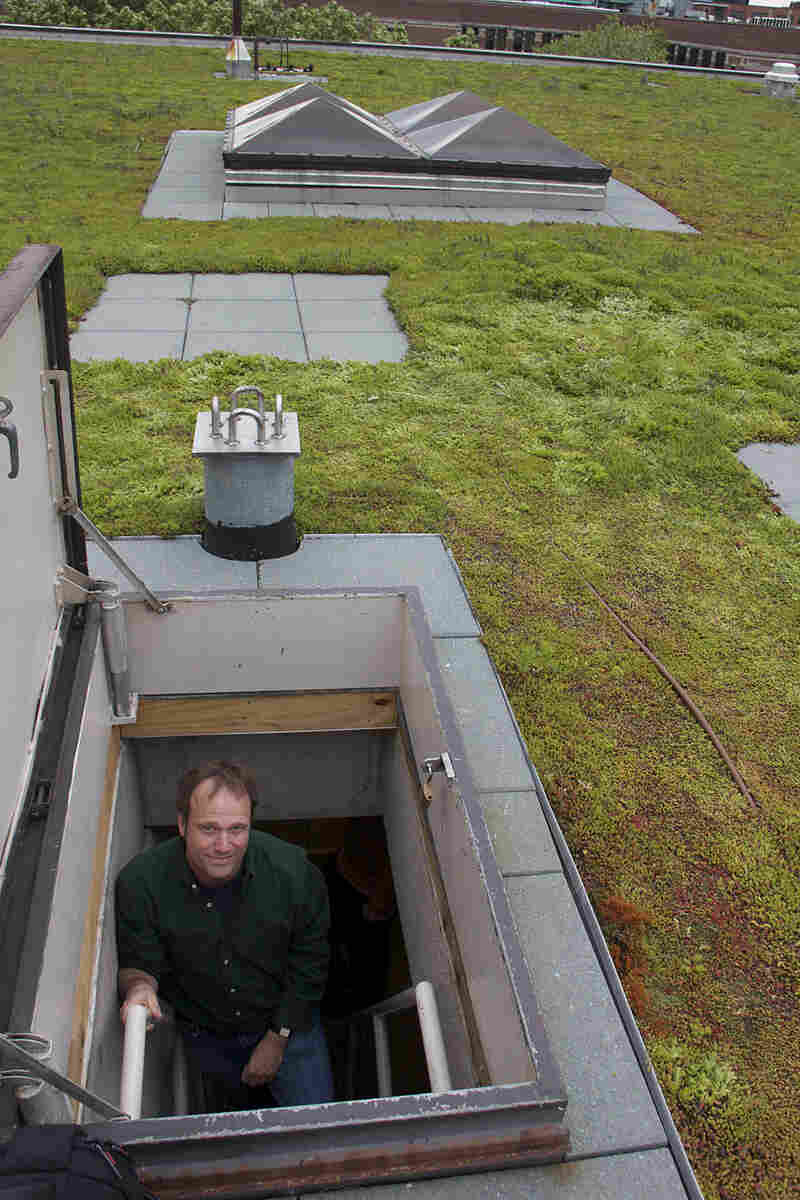 Andy Hoffman, Holcim professor of sustainable enterprise at the University of Michigan, peers out of a trapdoor in a green roof. Hoffman teaches a course in green construction. Franklyn Cater/NPR hide caption 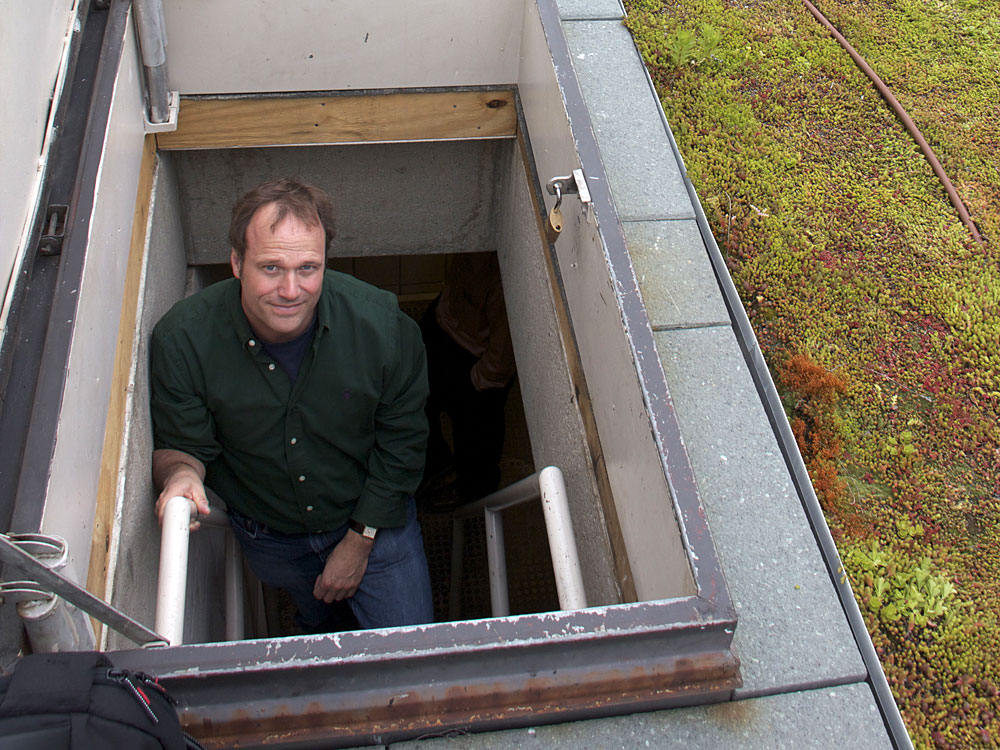 Andy Hoffman, Holcim professor of sustainable enterprise at the University of Michigan, peers out of a trapdoor in a green roof. Hoffman teaches a course in green construction.

The company dumped its bronze rating -- and renamed it simply "certified."

"They're one of the most savvy nonprofits when it comes to how do you reach out to the press, how to do marketing, and how to communicate their message," says Michele Russo, director of green research for McGraw-Hill Construction in Washington. "The word LEED meant nothing 10 odd years ago. And now that is literally like Kleenex is to tissues. I mean, you think of a LEED building and people think, 'Oh, it's a green building.' "

Russo says the USGBC has been smart to network with people in every sector. And there's a growing army of professionals who now have LEED credentials.

Around 155,000 designers, contractors, consultants and others have studied up online using courses, then passed the test to earn the designation LEED Accredited Professional -- or "green associate."

Employ a LEED AP on a project and you get a point for that. The human infrastructure around LEED far exceeds the number of actual projects. Since 2000, the USGBC says it has registered just a little under 55,000 commercial and residential projects and certified around 12,000. So why are so many people getting credentialed?

As an industry observer, Russo says the LEED AP gives her added credibility. "It is nice to have on the business card," she says.

So many people want the professional designation that it's a big source of revenue. The USGBC brought in about $107 million last year. Some $42 million of that was related to accreditation.

And here's another reason for professionals to get familiar with LEED: In more and more places, LEED is becoming law. Part 2 of this report will look at critics' charges that LEED doesn't deliver on all its promises, and how the USGBC answers that criticism.

NPR's Franklyn Cater was a 2010 Knight Wallace Journalism Fellow at the University of Michigan, where he studied the intersection of the green economy and the built environment.