Accessibility links
New Media Strain Government Tolerance In Syria Facebook and Twitter link young Syrians to the wider world. Even the autocratic regime has been forced to accommodate the aspirations of younger generations. People are better informed, but not empowered. 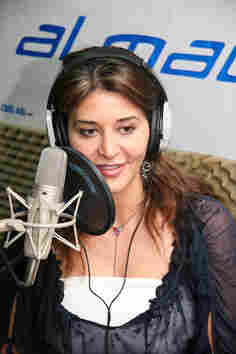 Honey al-Sayed, the queen of morning drive time radio in Damascus, has pushed the boundaries of free speech in Syria. The autocratic regime in Syria has been forced to accommodate new media, including Facebook and Twitter. Courtesy of almadinafm.com hide caption

The queen of Syria's morning drive-time radio plays Western rock and Arabic favorites. Honey al-Sayed opens her show -- a mix of Arabic and English -- with the words, "Good morning, Syria"  and offers horoscopes, daily currency exchange rates and banter with truck drivers who call in to pass on the latest jokes.

She says she’s bringing something new to the Syrian airwaves, pushing the boundaries of free speech.

“We were the first private radio to open in Syria," Sayed says during a break in the fast-paced program. “And we are allowed now to do something different. So, that is Syria opening up."

New technologies are accelerating change across the region for a young generation that is now the majority of the population. Sayed connects to her listeners personally through text messages and the Internet.

Facebook and Twitter link young Syrians to the wider world. Even Syria's autocratic regime has been forced to accommodate the aspirations of the younger generations.

The government has allowed private media companies to open after years of heavy state control. Licenses have been awarded to businessmen with close ties to the government. Still, young talents such as Sayed have the freedom to break taboos.

“Sex education and child abuse, and molestation, anorexia, bulimia and divorce and marital problems," Sayed says, listing the subjects she has tackled.

But there are limits. Her radio station has an entertainment license. “We are not licensed to do politics,” she says.

“It’s been very hands-on, a bit of a control freak, if you want, until now," Harling says of the Syrian government. “But they do realize that there is competition out there now. They have to recognize the change and adjust to it. They just find it hard to do so.”

The competition Harling refers to is information that is streaming into the country via the Internet, digital phones and satellite television. Young Syrians are more informed than ever before, and they can ignore old-style government media, which is little more than propaganda.

“I am not sure who watches the Syrian media or reads the Syrian news anymore,” Harling says.

The government has loosened controls on private outlets. Now, there are more than a dozen radio stations, a television outlet and a few private newspapers and magazines run by a new generation of journalists.

Forward magazine, one of the new crop of private media, has an online version that includes blogs and tweets on topics that range from the social to the political.

“We are often asked about censorship,” says Sami Mobeyed, editor-in-chief of the English-language monthly. " 'Does your magazine get read by the censors before it goes to newsstands?' And people are surprised when I say no. It used to be. Today, it’s left up to your own best judgment. The magazine is read once it’s out there."

While Forward magazine does publish a certain amount of political criticism, others writing in Arabic about similar topics have gone to jail.

How do Arab journalists know what is permitted and what can get them arrested?

They call the boundaries “red lines" -- sensitive topics include, for example, criticizing government policies or personalities -- and they lead journalists to engage in self-censorship.

“There is no absolute freedom in media; there are red lines all over the Arab world," Mobeyed says.

The Web poses the biggest challenge to every Arab government's monopoly over the media. Dozens of news websites, political blogs and Facebook groups have emerged that are not so easy to control. The Syrian government has banned as many as 200 sites, including Facebook and YouTube.

But at the Rawda Cafe in Damascus, where free Wi-Fi comes with the strong cardamom-flavored coffee, tech-savvy young Syrians know how to get around the bans and openly browse their Facebook sites.

When people can see and read everything on the Internet, why do Arab governments still try to control access to information?

“They cannot control the Internet, but they can control the people," says Khalid Elekhtyar, an online journalist.

He explains how it works when you believe someone from the government is always watching: "They don’t want you to feel comfortable. So sometimes, it’s really this issue, like a psychological issue.”

Syrians have learned that bloggers can be jailed under a vague law that criminalizes "undermining national sentiment."  Internet cafes are licensed, and owners must report the national ID number of every user and the sites that are surfed.  A 19-year-old blogger was jailed last year for her poetry, which called on oppressed citizens to stand up for their rights.

The Committee to Protect Journalists ranked Syria among the top 10 worst countries in which to be a blogger -- a list that includes Egypt and Saudi Arabia.

While the Internet has been a new challenge, Arab governments have learned how to counter any threat, says Joshua Landis, an American university professor who writes an influential blog on Syria.

That is the standard approach across the region, says Rami Khouri at the American University of Beirut.

“Nobody has been able to use the media, and the new media especially, to bring about political change anywhere. Not an opening, not a change in leadership, not a serious change in policy -- nothing,” says Khouri, who has launched a group of researchers to document Internet use in the Arab world, especially among the young.

“Young people are using the Web as means of creating parallel worlds where they have less constraint, they are not controlled and get a vicarious thrill of living more freely than they can live in their real societies, and all of these constraints have disappeared when they are on the Web," he says.

Research shows that most young Arabs are not looking to the Web to change the world; they just want to join it, Khouri says. Their interests are mostly music and entertainment, and some search news sites.

They are the most informed generation, Khouri says, but not empowered.