Accessibility links
New York Tribal Cigarette Sales Under Fire New York has the highest cigarette tax in the nation, but about a third of the cigarettes sold in the state aren't taxed because they're purchased online or at smoke shops run by American Indians. The state now hopes to collect sales tax on cigarettes sold to nonnatives on tribal lands. 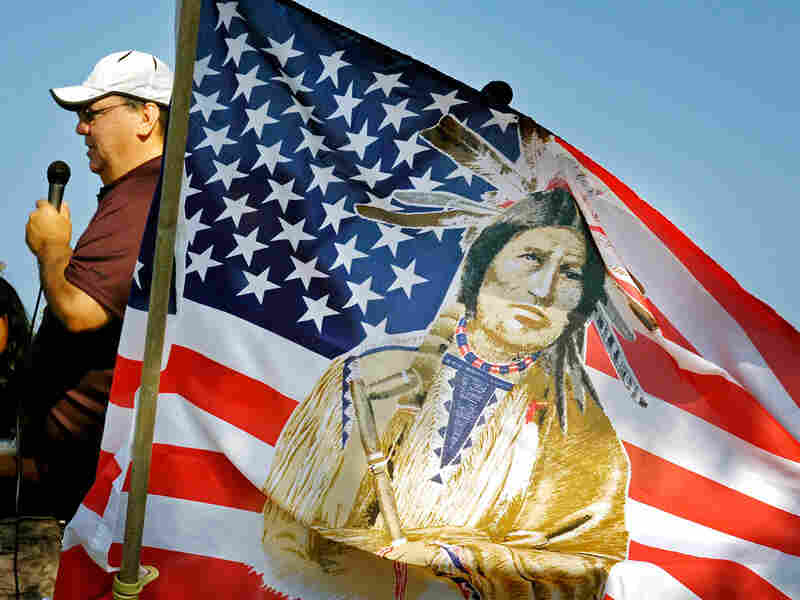 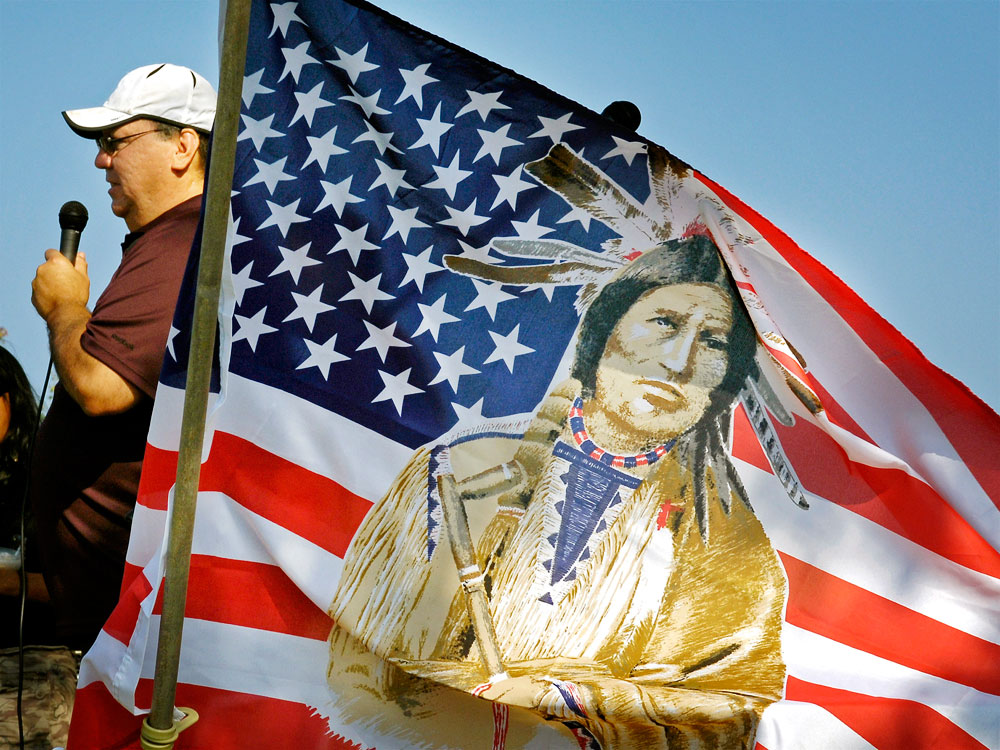 Ros John, a member of the Seneca tribe, speaks during a rally last week in Irving, N.Y., to protest the proposed New York cigarette tax for nonnative consumers.

New York has the highest cigarette tax in the nation, but about a third of the cigarettes sold in the state aren’t taxed at all -- they’re purchased over the Internet or at smoke shops run by the state’s American Indians on tribal land.

Tribes in New York are supposed to collect sales tax from any nonnatives who come onto tribal land to buy cigarettes. But the tribes have long refused to collect the tax. When the state announced that it would begin collecting the money on Sept. 1, the two sides ended up in court. A state judge last week postponed the tax collection so he could further consider the matter.

Robert Odawi Porter of the Seneca nation says it is a small victory in a big fight: "These battles have been going on for more than 200 years and we have fought battles over title to our land, the jurisdiction over our lands, our waters and now our commerce. This is one battle of many."

Customers frequent the busy Onondaga Nation Smoke Shop to avoid paying the $4.35 tax on each pack of cigarettes.

Ben Brown walks out with five cartons for his wife. "I put a nail in her coffin all the time, but she’s still living," Brown says.

He drives here from Ithaca -- an hour away. He thinks the state should give up trying to tax tribal cigarettes.

"I’m rooting for the tribes," Brown says. "If the state wants to pay for all the land it took away from the Indians over the history of this thing that’s fine and dandy, then I’ll pay the tax. Until then, the state owes the Indians."

But the new state law would tack on the sales tax at the wholesale level, before the cigarettes are shipped to retailers. Gov. David Paterson says that way tribal stores will have to charge the same price as nontribal stores.

"It was voted on by the Legislature and signed into law, and it is our right to do this as New Yorkers to try and protect our businesses that are suffering from an unfair competitive advantage," Paterson says. 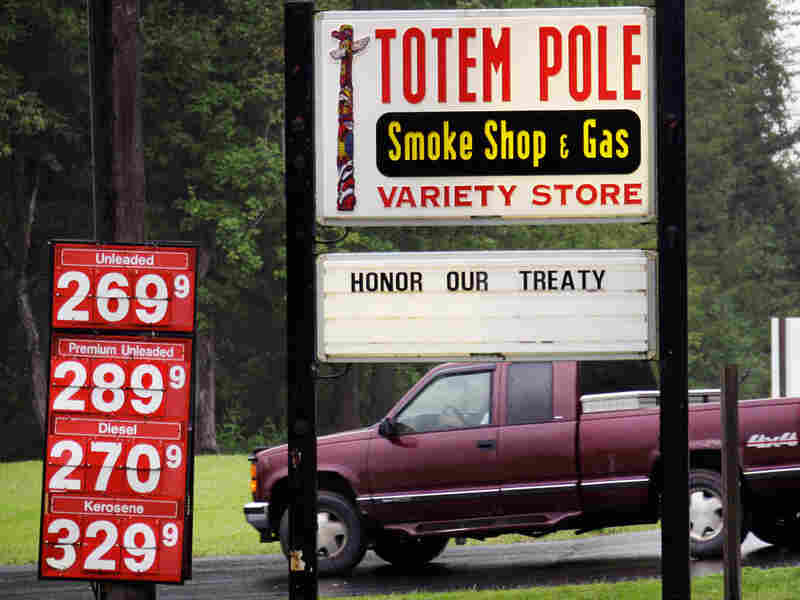 A motorist enters a business on the Tonawanda Seneca nation in New York. The state of New York is escalating its efforts to collect sales tax on cigarettes sold on tribal land. David Duprey/AP hide caption 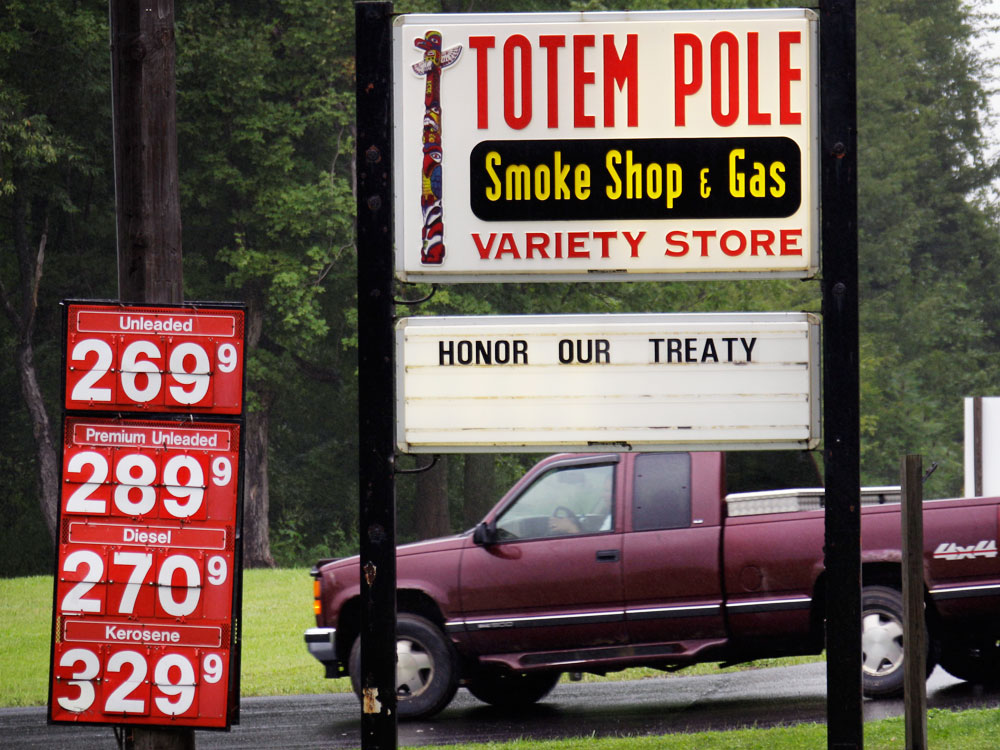 A motorist enters a business on the Tonawanda Seneca nation in New York. The state of New York is escalating its efforts to collect sales tax on cigarettes sold on tribal land.

"Governments don’t tax other governments," Carmen says. "It would be wholly inappropriate for the state of New York to attempt to tax products sold on the Oneida nation reservation."

The Oneidas have started to play hardball. They already make their own brand of cigarettes, which they sell alongside big-name brands. To maneuver around New York’s tax, they decided to move their cigarette-making plant to their reservation -- making them self-contained manufacturers and retailers.

Carmen says they plan to ditch big-name tobacco brands and sell only their two brands.

The Seneca nation is having a much harder time maintaining its cigarette business because of a new federal law that prohibits Internet retailers from using the U.S. Postal Service to send tobacco items. It's a business the Seneca nation dominated. Seneca President Barry Snyder says the efforts to crack down on cigarette sales have the Senecas considering whether they need to find other ways to make money.

"We’re looking at a lot of economic things," Snyder says. "As a sovereign, I think we start looking internally at ourselves again. We haven’t done that very much. I think we need to create opportunity for ... everyone of our Seneca membership."

But the fight over the cigarette tax will continue. New York says it will earn $200 million by collecting the tax. And in a tight budget year, that’s money the state can’t afford to give up on.