Accessibility links
JetBlue Customers Fly High On Special Offer The airline is offering its second "All You Can Jet" promotion, where pass recipients have one month to travel on JetBlue flights, as many times as they want, for $699. This year's promotion is facilitating at least one band tour and fostering a bond among the travelers. 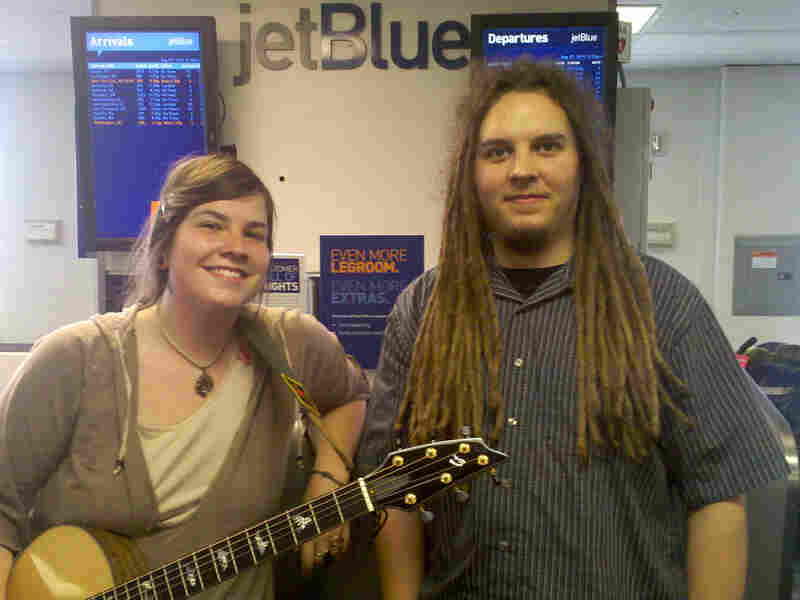 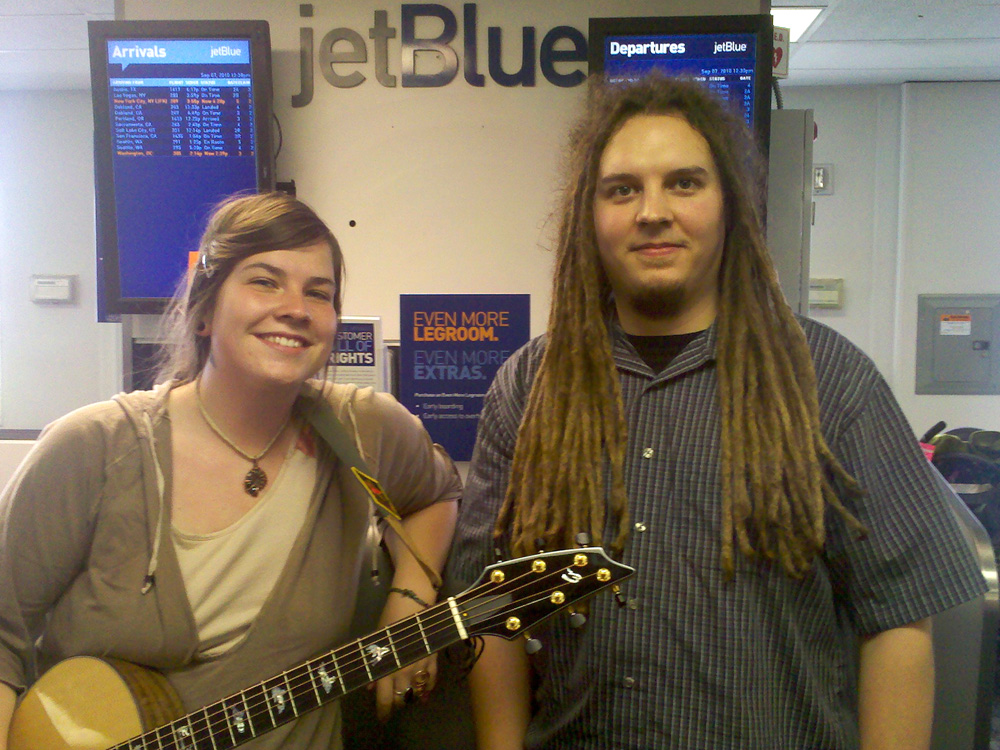 Emma Hill and Bryan Daste are using their JetBlue passes to go on tour with their band, Emma Hill and Her Gentlemen Callers.

Flying can be a hassle, with long lines, luggage checks and cramped quarters. But a recent promotion by JetBlue Airways has people packing their bags faster than the airline can sell tickets.

Emma Hill was one of the customers taking advantage of the offer. Until recently, she had never dreamed her band would tour by jet.

"My first tour, I went all by myself via Greyhound. One more big tour, my sister loaned me her Prius. Next trip I bought a short bus and kinda converted it into a band vehicle and we did ... six weeks around the U.S. last summer with that," Hill says.

Emma Hill and Bryan Daste, both members of Emma Hill and Her Gentleman Callers, spoke with NPR while taking a break from recording their band’s third album in Daste’s recording studio in Portland, Ore. They are preparing for a frenetic monthlong, cross-country tour, which they would never be able to do without JetBlue’s “All You Can Jet Pass.”

"At first I was, like, this is way too good to be true. Read the fine print," Hill says.

Daste saw the ad first. For $699 per pass, travelers can fly anywhere JetBlue does as many times as humanly possible from Sept. 7 through Oct. 6, the slowest travel period of the year.

Hill and Daste have now set up an exhausting tour in 13 states, playing at bars, clubs, and backyards in places like Buffalo, N.Y., Las Vegas and Sacramento, Calif.

So it was like a little treat to myself and said, OK, I’m just going to do something different. And do something like an epic thing.

Hill says the traveling schedule has "crazy" layovers and connecting flights, "but it's exciting."

Clarence Kwan, an architect based in Seattle, was one of the test fliers who bought JetBlue passes last year when the airline first launched the experiment.

Kwan says buying the pass was a pre-emptive attempt to avert a midlife crisis. He was about to get laid off and was just weeks away from his 40th birthday. When he heard about the JetBlue pass, he saw it as an opportunity to ride out a bad phase.

"So it was like a little treat to myself and said, OK, I’m just going to do something different. And do something like an epic thing," Kwan says.

He says he felt camaraderie with fellow travelers who were also eat-pray-loving their way from one JetBlue flight to another. Still, his most meaningful trip was also one of the shortest.

"At one point I even went to California to put a bunch of flowers at my grandparents' gravesite and then I just took off," Kwan says.

JetBlue will not divulge how many “All You Can Jet Passes” are up for sale; however, this year’s tickets sold out in just two days, even after a 15 percent boost in available passes from last year.

"I think it's fair to say we were gobsmacked with the success of All You Can Jet," says Robin Hayes, the airline's chief commercial officer.

Hayes says the promotion’s success is largely due to word of mouth from passengers like Kwan.

"I would describe that as a nonstop party. We had flights with 80, 100 All You Can Jetters on them. I mean it really was 30 days of a very carnival-like atmosphere at JetBlue," Hayes says.

To add to the carnival-like atmosphere, JetBlue is helping its “Jetters” get organized, with a Facebook page where travelers can make plans to meet up, ask advice, post their personal dos and don’ts, or list their favorites spots.

Bandmates Hill and Daste probably won't have any time to make new friends. Even though traveling with JetBlue is cheap, it is not always direct. For example, their route from Portland to Baton Rouge included stops at Long Beach, Calif., the airline’s West Coast hub, and New York City, the East Coast hub.

Including layovers and time spent hanging out at airports, the trip took about 24 hours. But, Daste says, it’s “still faster than driving there.”

JetBlue Flight Attendant Hailed By Many For Dramatic Exit Aug. 10, 2010