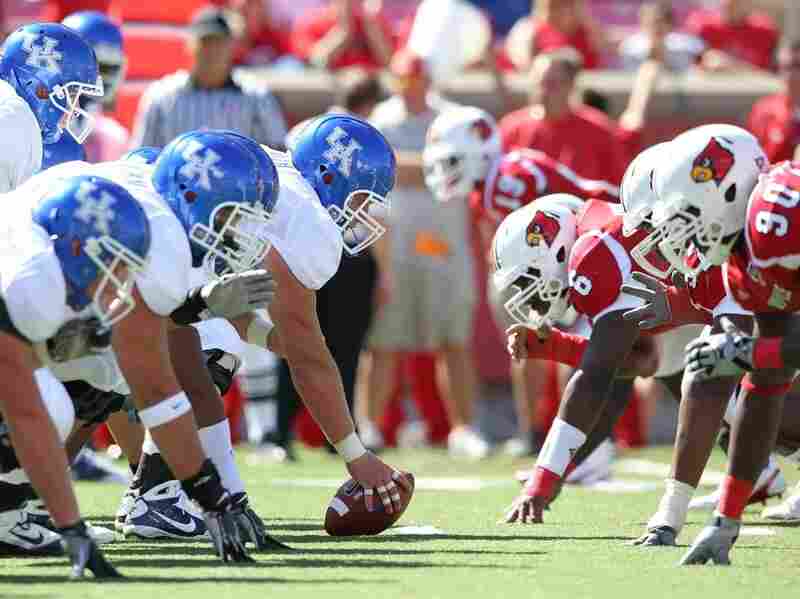 Battle Lines: The Kentucky Wildcats and the Louisville Cardinals square off at the line of scrimmage during a game at Papa John's Cardinal Stadium on Sept. 4 in Louisville. Andy Lyons/Getty Images hide caption

There's an old cliche that football is a benign substitute for war. Ground attack, flanks, bombs, blitz and so forth.

But it is a truth, not a cliche, that our football has gained in popularity in the United States as we have had less success with our wars. It makes me wonder if, ironically, football doesn’t provide us more with nostalgia for the way war used to be -- with clear battle maps, focused campaigns, simple battle lines.

And, of course, football games have neat conclusions -- they’re simply won or lost. But our wars are precisely not settled that way anymore; their goals are vague and imprecise and they just drag on and on, without resolution.

So, ultimately, given our wistful attention span, war bores us; and since so few of us citizens are asked to actively be engaged in our war, most of us are merely citizen-spectators to it, rather than involved compatriots; and, in this television world today, we lose interest in war. Football is better to watch.

Of course, all that aside, the increased popularity of football may also be explained by the fact that it has become so much more violent than our other team sports, as indeed we prefer more violence in most all phases of our entertainment today. Mixed martial arts is more violent than traditional boxing, auto racing is more violent than horse racing, and professional wrestling makes comedy out of brutality. Our movies and television, too, are more violent, and our children grow up devoted to incredibly bloodthirsty video games. Even our music, that which soothes the savage beast, is more savage today.

It’s been glib to say that violence in America is as traditional as apple pie. I don’t think so. The new violence is show biz. Rather than traditional, it’s trendy -- a fashionably entertaining part of everyday life, not any byproduct of our aggressive heritage. And for all the beautiful excitement in football -- the kickoff returns, the long touchdown passes -- the one constant is the hitting. We very much enjoy watching football players hit one another. That makes the highlight reel.

The NFL has belatedly begun to acknowledge that the potential for damage to athletes’ minds and bodies is probably much more the case than we have been prepared to admit. It is almost as if we didn’t want to recognize that in a sport where hits to the head are so common, concussions are bound to happen. But then, since we no longer pay that much attention to our wars, it’s easy to overlook casualties there, as well. Football and war today seem to have that in common, too.